Maggie Cheung delivered one of the best performances of her career in Stanley Kwan’s lush, definitive, and boldly conceived biopic. . . . Now gorgeously restored in 4K from the original negative, and approved by Kwan himself. 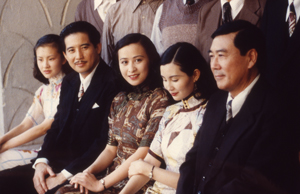 After a string of memorable performances as strong-willed, beautiful, and virtuous (even in vice) women, the Chinese actress Ruan Lingyu committed suicide in 1935, at the age of twenty-four. She is now acknowledged as one of the country’s greatest performers. Stanley Kwan’s innovative film goes far beyond the traditional biopic to offer up several strata of “reality,” “reenactment,” and “cinema.” Detailed recreations of scenes from the actress’s too-short life (with Maggie Cheung as Ruan and Tony Leung Ka-fai, Carina Lau, and Waise Lee as other real-life figures) combine with documentary interviews of her contemporaries, actual footage from her existing silent films, and even out-of-character discussions between Cheung, Kwan, and other cast members about Ruan, her work, and her mystique. Like a Russian doll opening up layer after hidden layer, Center Stage reveals a modernist take on the ways in which cinema and culture create an actress, a legend, and a woman.