Da-Rin gives us an elusive but powerful sense of the limits of our own vision. 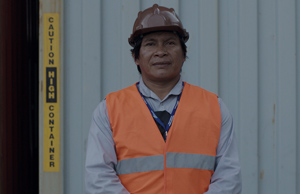 The division between urbanity and the wilderness is atmospherically explored in acclaimed documentarian Maya Da-Rin’s narrative debut. Middle-aged Justinio works security at the port of Manaus but longs for the Amazonian environment where he was raised, while his daughter plans to attend university in the big city. Da-Rin’s story presents the jungle as an inescapable, wondrous entity, and her eye for the telling detail is remarkable, infusing everything from the mysterious fever that grips Justinio to the news reports of a large animal on the loose. “Fiercely anti-Bolsonaro, the film portrays indigenous Amazonians as torn between their source of income—the city—and their source of strength: the rainforest. Da-Rin’s first feature [is] a searing indictment of her country’s leadership and fascism worldwide” (Laura Davis, Sight & Sound).