Streaming: The Story of a Three Day Pass

Among the great American films of the sixties. . . . The movie reflects the stylistic variety and the freewheeling innovation of the French New Wave. 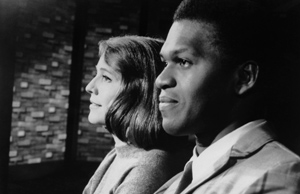 Exuberant, inventive, and poignant, The Story of a Three Day Pass brilliantly balances French New Wave style with profound social critique and psychological substance. Melvin Van Peebles adapted the film from his novel La permission, written in French after he traded Hollywood’s racist roadblocks for opportunity in Paris. In the very first scene Van Peebles makes explicit the conflicted consciousness of Black GI Turner (Harry Baird): as he checks himself in the mirror before a meeting with his commanding officer, his reflection chides him about why he is receiving an anticipated promotion. But after enduring a condescending lecture from the captain and being endowed with the eponymous pass, he embarks on a sightseeing sojourn to Paris, and eventually into the arms of Miriam (a radiant Nicole Berger in her final role). Baird’s extraordinary performance as Turner communicates the charm and complexity of the soldier as he navigates the streets of Paris and his courtship of Miriam in faltering French. Van Peebles makes the most of cinematic technique, cross-cultural comedy, and the pitfalls of translation, without sugarcoating the bitter structural realities inherent in the plight of the Black soldier.