A nuanced, fact-based period drama focusing on female relationships . . . Tove beguiles audiences into the world of its characters. 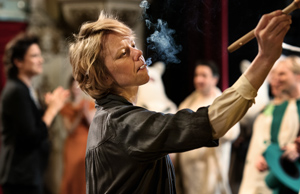 An exploration of love, art, and personal freedom, Zaida Bergroth’s biopic spans ten years in the life of Tove Jansson, creator of the internationally beloved Moomin novels, comic strips, and illustrations. Jansson initially created the Moomins—round, gentle creatures who inhabit a mythical valley—as an escape from the horrors of World War II, and the opening of the film finds Tove (an exuberant Alma Pöysti) drawing in a Helsinki bomb shelter in 1944. While Jansson initially deems her doodles a distraction, and illustration work merely a way to make a living as she struggles to be taken seriously as a painter, it is the Moomins that ultimately bring her acclaim and financial independence. Jansson's strained relationship with her father, a respected sculptor, and unconventional love affairs with left-wing journalist/politician Atos Wirtanen and magnetic but emotionally distant theater director Vivica Bandler (a dazzling Krista Kosonen) are all inextricably intertwined inspirations for her work. Written, directed, and photographed (on 16mm film) by women, and graced with a talented cast, Tove meticulously recreates Jansson’s fascinating bohemian milieu.