A Cinematic Progression: Critic Sam Lubell on the Architecture of the New BAMPFA

Diller Scofidio + Renfro’s Berkeley Art Museum and Pacific Film Archive—an adaptive reuse of the 1939 UC printing plant and its adjacent office building in downtown Berkeley—is a diverse complex, full of surprises, that merges old and new and creates a dramatic tension between serene and dynamic environments. “The parts and pieces are intended to contrast with each other, but also to work together,” explains DS + R principal Charles Renfro.

"The twisting, brushed stainless steel ribbon wraps itself around the existing Art Deco building like a torqued filmstrip."

On the exterior of the $112 million, 83,000-square-foot project that tension is made apparent by the twisting, brushed stainless steel ribbon that wraps itself around the existing Art Deco building like a torqued filmstrip. That striking form, which shelters the film theater and other new spaces, formally connects the varied components of the building, and leads the eye toward the dramatic cantilevered volume housing a cafe over the entrance.

"Each zone provides a glimpse into the next."

Once you enter under the beckoning canopy you’re brought into a building infused with natural light, open to Center Street through a large stripe of windows. From here the tension between styles and atmospheres plays out more explicitly as you follow what Renfro calls a “cinematic” progression of space (an appropriate concept for this film-related project); each zone provides a glimpse into the next, and “things get stitched together to form a complete experience,” he says. 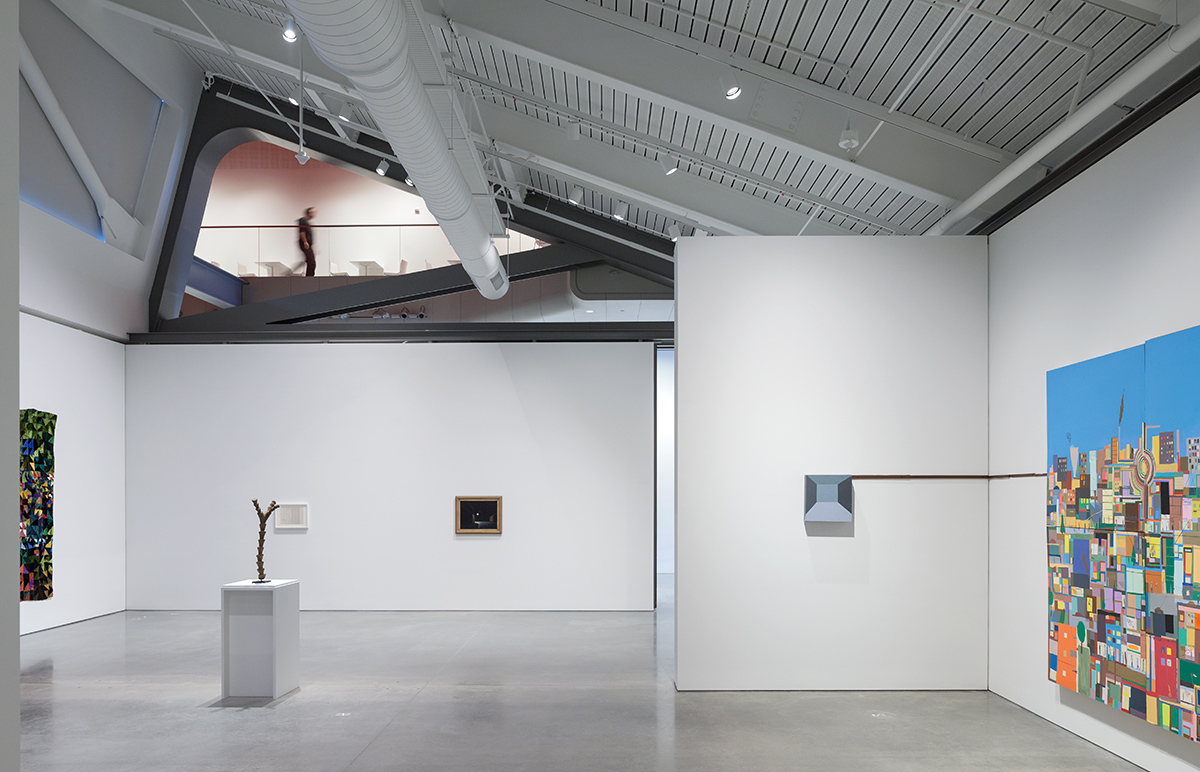 The entry extends into a central hallway—the spine of the building—from which you can peer into the three-story multipurpose space and bookstore, and then into the main exhibition galleries. The flexible, cavernous galleries, with their eighteen-to twenty-eight-foot ceiling heights, are infused with a sense of grandeur. While serene elegance dominates—the spaces are illuminated from above by soft, natural light—the sawtooth skylights feel almost prehistoric in their scale, jagged remnants from a grimier, more robust industrial past. Their rhythmic slats lend a sense of syncopation to the galleries below.

On the lower level you discover a grid of four cooler, more restrained galleries, with polished concrete floors (save for the wood-floored room devoted to the display of Himalayan art). Here the ceilings are lower and light levels more controlled, and you get a sense of intimate compression. You feel like you’re in a secret vault, tucked away from the hum above. Glimpses of light, space, and form lead you from one gallery to the next.

Beneath the theater DS+R has placed four study centers that open the collections to the public in a completely new way. With clerestory windows that allow in natural light as well as the gaze of curious passersby, it is a sanctum for study that is not too cloistered in the academic world. Looking up, you are confronted with large steel supports that are a hulking reminder of the 232-seat film theater hovering palpably above.

"The theater’s steel skin wraps tightly around its angular form, its long, slightly diverging seams accentuating a sense of tension and movement."

The institution’s first dedicated cinema, whose interior walls are lined with folded, perforated black acoustical panels, will allow BAMPFA to screen a variety of film formats with top-level clarity and sound, while still feeling appropriately intimate. On the building exterior, the theater’s steel skin wraps tightly around its angular form, its long, slightly diverging seams accentuating a sense of tension and movement. Its northern facade is punctuated by an impressive—and improbable—outdoor screen, which will show films and share glimpses of BAMPFA’s collection, among other things, visible from a small plaza.

Take the stairs or elevator to the second floor (past the light-filled staff offices in the adjacent building, with its flowing Deco details) and you visit another highlight: the rich, chili-red cafe that sits above Center Street. Its warped, extending form alters your reality and carves out views east toward the Berkeley campus and hills beyond, west toward the Golden Gate, and, from a glazed band down the hall, into the exhibition spaces below. The carefully created scenes, as cinematic as the spaces inside, are reminders of the building’s location between the campus and the city. “The site is the number one magical ingredient,” says BAMPFA Director Lawrence Rinder.

"Its wonderful, quirky variety—very Berkeley— calls you back for another visit."

The rich tapestry of architectural threads— old, new, tranquil, vigorous, constricted, and voluminous—woven together in an elegant, theatrical way, make the building not just an effective space to display art, screen films, and study, but a unique place to explore. Its wonderful, quirky variety—very Berkeley— calls you back for another visit. As Rinder notes, your path here is “more of a wander than a line.”

Sam Lubell writes about architecture for The Architect’s Newspaper, Wallpaper, and Wired, among other publications. He is coauthor of Never Built Los Angeles and is currently working on a companion project, Never Built New York, for Metropolis Books.