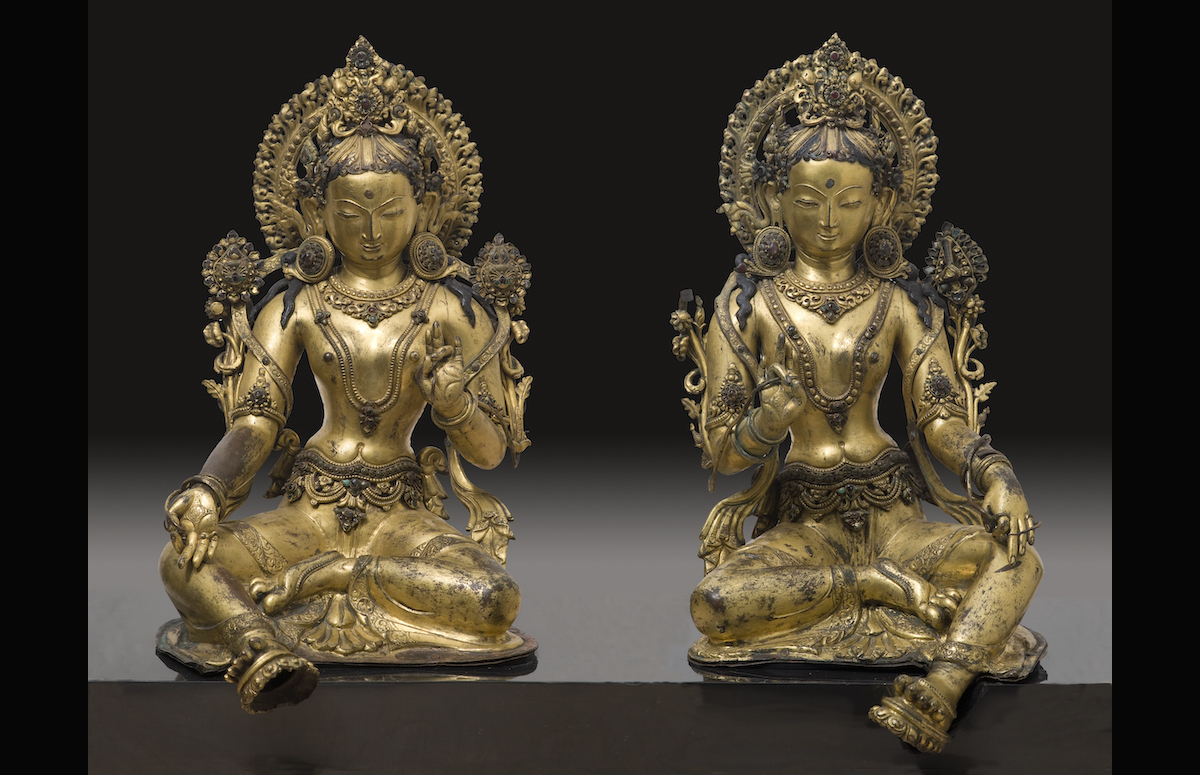 Two Taras, Nepal, 18th century; gilt copper repoussé; 11 3/4 in. high (each); on long-term loan to BAMPFA from a private collection.

BAMPFA Exhibition Celebrates the Role of Women in Himalayan Art, Made Possible by Louise Gund

There are eight galleries under BAMPFA’s roof, each with a rotating series of exhibitions that showcase the full breadth of the museum’s encyclopedic art collection. But since the opening of BAMPFA’s new building in 2016, one of these galleries has been exclusively dedicated to Buddhist art—allowing the museum to highlight its remarkable holdings of art from this area, one of the most significant strengths of the museum’s collection. This season, BAMPFA’s exhibition focuses for the first time on representations of women in Hindu and Buddhist art, entitled Divine Women, Divine Wisdom.

Though the female form is not always prominent in popular conceptions of Buddhist or Hindu art, artists in the tradition have been crafting vibrant female representations for millennia. Both secular and religious art often celebrates the beauty, fecundity, wisdom, power, and compassion of female identity—frequently depicting divine figures who align with the cosmology of Buddhist or Hindu practices. Divine Women, Divine Wisdom focuses on three separate historical strands of female representation: secular and Hindu South Asian art from India and Indonesia; Buddhist Indian art, including the Gandharan tradition that flourished in what is today Afghanistan and Pakistan; and Buddhist Himalayan art from Tibet and Nepal. Sometimes, as with the Buddhist deity Tara, women are depicted as figures of compassion and divine grace; others like the fiercely depicted Paldem Lhamo reflect a conception of female power and serve as protectors of the faith.

Some of the divine women depicted in the exhibition include:

Divine Women, Divine Wisdom draws on a long-term loan to BAMPFA of an outstanding collection of Himalayan and South Asian art. The exhibition is made possible by a BAMPFA supporter, Louise Gund, who has traveled to the Himalayan region many times and is a passionate supporter of its artistic traditions.

“The treasured works in this exhibition remind us that artists of the Himalayas have celebrated powerful female figures throughout the region’s history, with images that have the capacity to stir powerful reflections centuries after they were made,” said Gund. “I believe that this magnificent exhibition—exceptionally well assembled by the team at BAMPFA—can ignite a sense of appreciation for Himalayan artistic traditions among diverse audiences, and perhaps provide some special inspiration to visitors who find resonance in the depictions of strong women from this vibrant tradition.”

The exhibition was curated by Julia M. White, BAMPFA’s senior curator for Asian art. During her time at BAMPFA, White has curated a series of exhibitions drawn from this collection that is on long-term loan to the museum, as well as a wide range of other exhibitions of Asian art—including Hinges: Sakaki Hyakusen and the Birth of Nanga Painting, a new exhibition of Japanese painting that opens this week.

“BAMPFA has a proud history of exhibition, scholarship, and programming around Buddhist art from Asia, which has become an ever more central focus since we received the long-term loan of the extraordinary private collection from which this exhibition is drawn,” said White. “We’re pleased to advance a deeper understanding and appreciation for Buddhist art with these rare works, and especially to highlight the underappreciated role of female representation in the region’s cultural traditions.”

Divine Women, Divine Wisdom is now on view at BAMPFA through May 2020. For more information, visit the exhibition’s webpage.