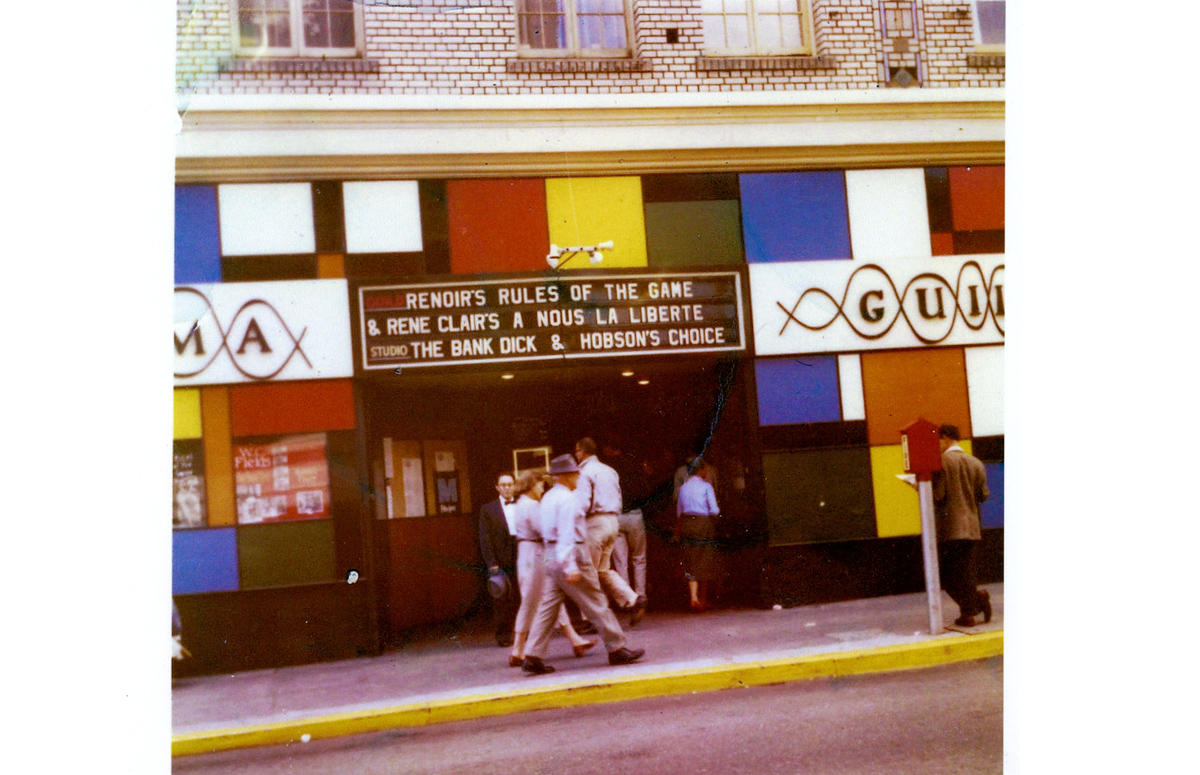 Off the Shelves: Pauline Kael and the Berkeley Cinema Guild

In conjunction with our streaming screening of Rob Garver’s documentary What She Said: The Art of Pauline Kael, the BAMPFA Film Library & Study Center is proud to share a digitized collection of publications from a place where the great film critic Kael got her start: the Berkeley Cinema Guild. Founded by Ed Landberg in 1952, the Cinema Guild was one of the first arthouse repertory theaters in the United States. In 1955 Landberg and Kael married; Kael co-managed the theater and became responsible for its program notes. Her short descriptions honed her concise writing style and original voice, foundations for a career that would influence cinema culture for decades to come, through her books and her work in the New Yorker. 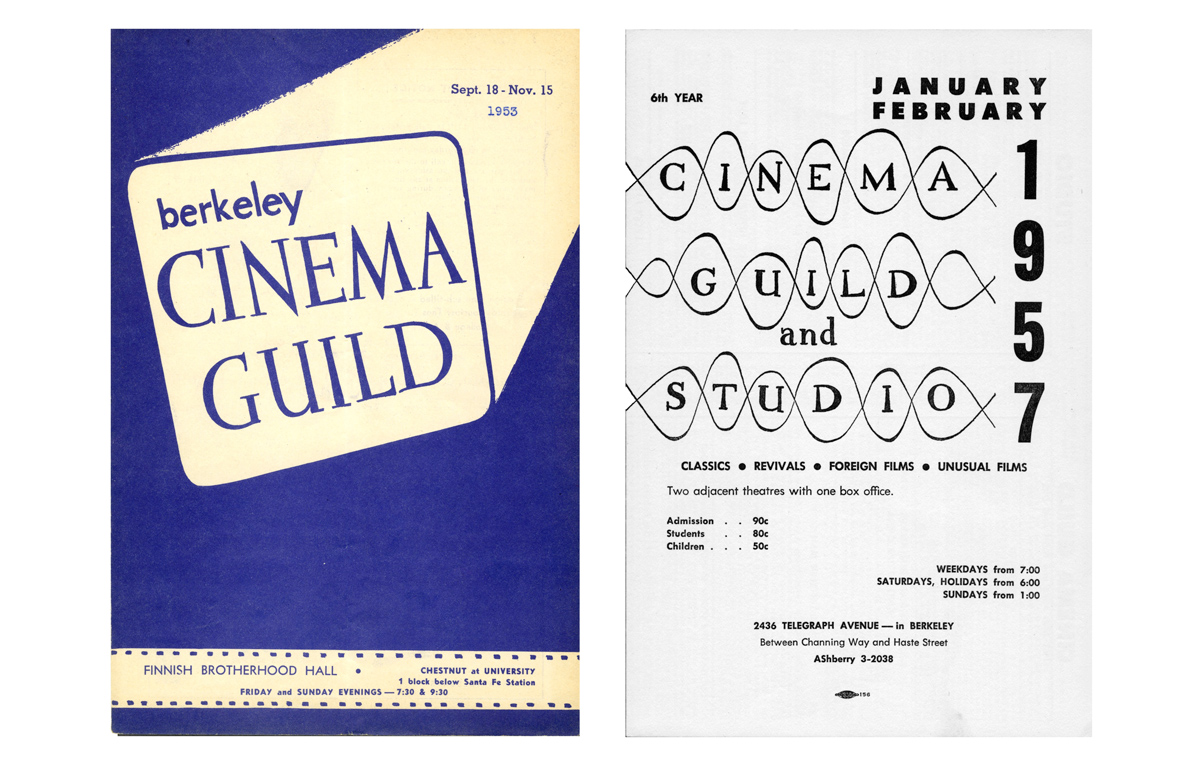 Kael and Landberg separated in 1958, but Kael continued working with the Cinema Guild until October 1960. (An Oakland Tribune article from 1961 describes a lawsuit by Kael against Landberg, noting misappropriation of corporate funds to purchase items such as “a hi-fi set . . . and a sports car, too.”) Kael later moved to New York City, while Landberg continued operating the Cinema Guild, building an artistic and cultural legacy that carries on through the countless repertory cinemas that followed—and through the cinephilia that supports them. “One of the earliest outposts of Telegraph Avenue as bohemian-intellectual playground” (Betty Marvin), the Guild was located in the Sequoia Building on Telegraph at Haste until shutting down in 1968; later the site of apartments and longtime Berkeley favorites Cafe Intermezzo and Raleigh’s, the building was badly damaged in a 2011 fire and later demolished. 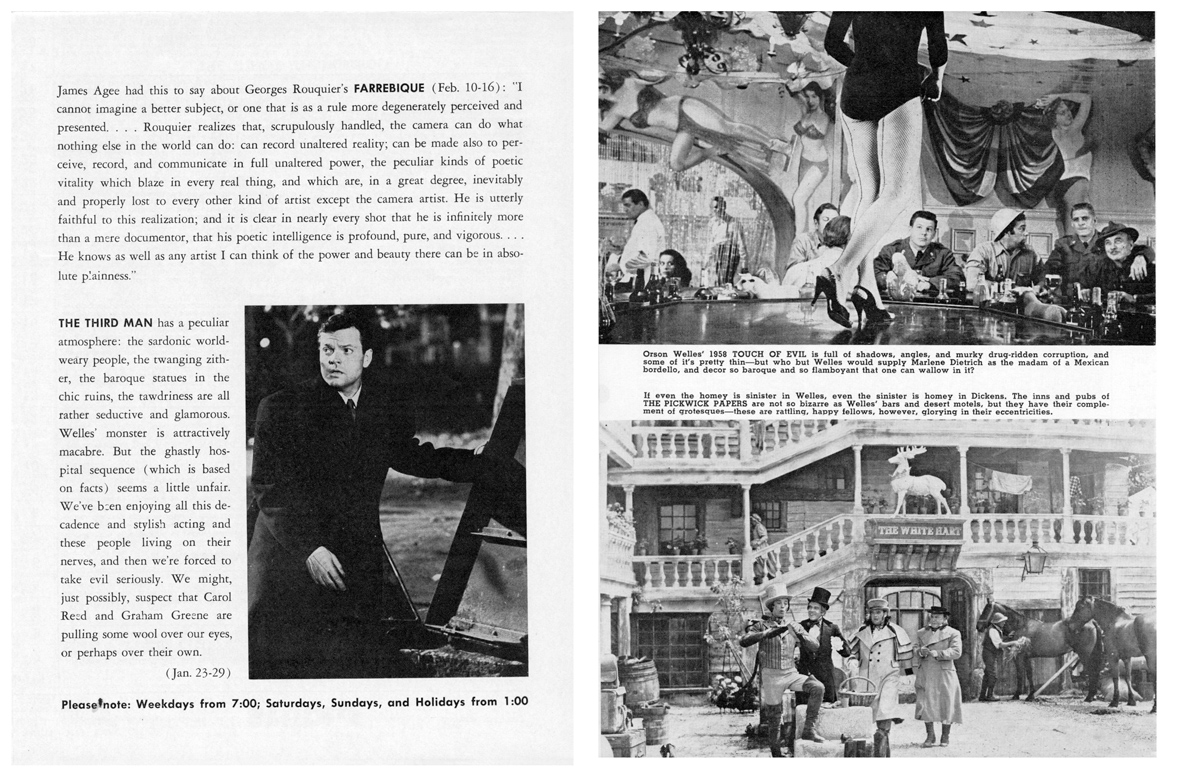 Excerpts from the Cinema Guild calendar, 1958.

Browse BAMPFA’s collection of Cinema Guild calendars through our newly redesigned CineFiles portal and you’ll witness the evolution of the program notes, with Kael developing a more distinct voice—and more space to write. The full collection includes calendars from 1952 to 1967; you can limit the search results by publication date to highlight the period from 1953 to 1960, when Kael was involved—although even after her departure it’s hard to tell whose notes are whose, as some of her earlier writing may have been reused in later programs.

You can accompany your browsing by virtually transporting yourself to March 1980, when Kael—at the height of her celebrity—made an appearance at the old Pacific Film Archive Theater. This recording was digitized with support from a CLIR grant, which enabled the Film Library & Study Center to digitize audiocassettes of many guest speakers at PFA from 1973 to 1986. The recording is split into two parts.