In honor of AAPI Heritage Month, this edition of Off the Shelves spotlights some of the key figures in Asian American film and video whose works are in our collection, and pays tribute to the organizations that have long funded, promoted, and championed such voices. Films by Bay Area luminaries like Wayne Wang, Trinh T. Minh-ha, and Steven Okazaki; audio recordings of champions like Loni Ding; and press kits and reviews of Asian American independent cinema milestones—often written by equally independent distributors and publishers—are some of the handful of rarities in the collection. 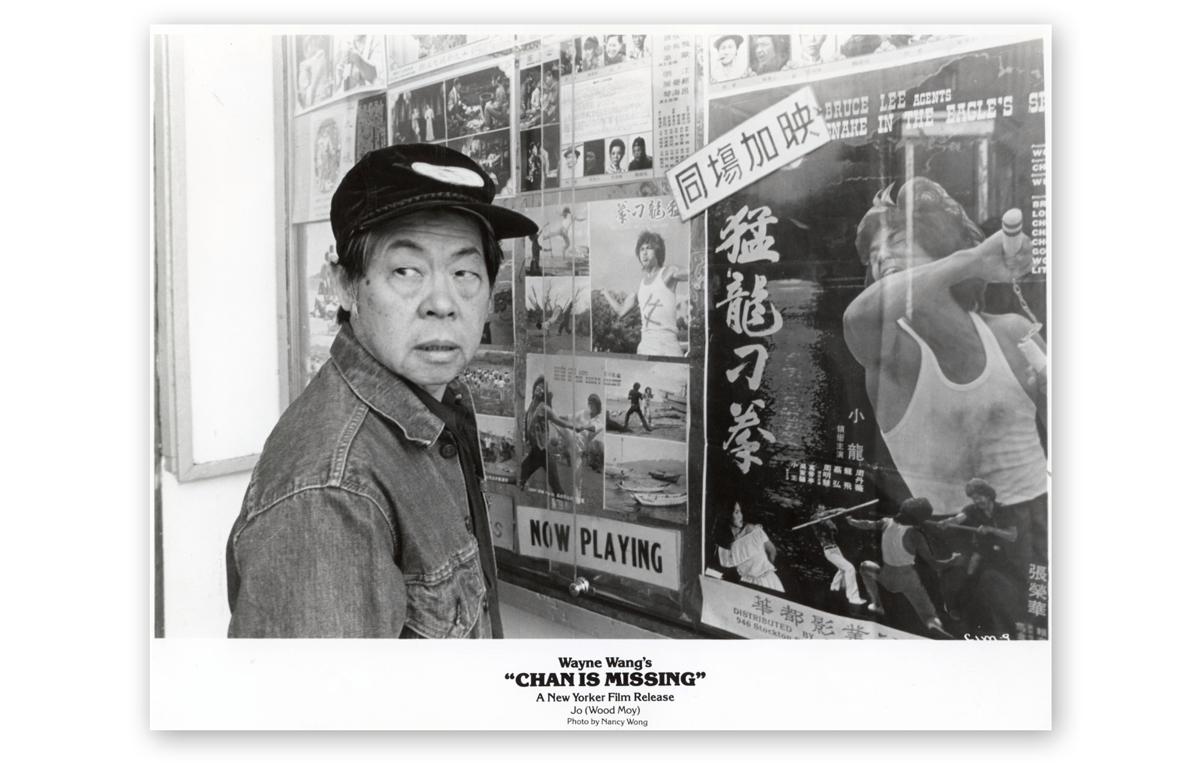 One can’t speak of independent film, Asian American or otherwise, without mentioning Wayne Wang. In 1982 his feature debut, Chan Is Missing, a noirish ramble set in San Francisco Chinatown, had its local premiere at BAMPFA, and went on to become “a leading expression of the Asian American and Asian experience in America” (Renee Tajima-Peña). Its proto-slacker humor and warm look at ordinary life in Chinatown, doused in a familiar mystery plotline of a search for a missing man, still stands as a monumental milestone in Asian American cinema, and in American independent cinema as a whole. A longtime friend of BAMPFA, Wang has of course forged a wildly successful career, ranging from other independent classics like Dim Sum and Eat a Bowl of Tea to the experimental, Hong Kong–set Life Is Cheap...But Toilet Paper Is Expensive (co-directed with Spencer Nakasako), and of course such Hollywood successes as The Joy Luck Club, Smoke, and Maid in Manhattan. Much of Wang's independent work can be found in the BAMPFA collection, and in 2017 we premiered a newly restored version of Chan Is Missing to a sold-out audience at BAMPFA’s Barbro Osher Theater. Our CineFiles portal holds a wide array of material, including a Dim Sum press kit and a 1986 interview with American Film.

Well-known San Francisco photographer Nancy Wong was on set for many of Wang’s early films, her sharp black-and-white images capturing the furtive energy of the team’s guerrilla shoots on the streets of San Francisco. She was kind enough to donate several of them to the BAMPFA Film Library & Study Center, where they provide excellent companion pieces to the films themselves. 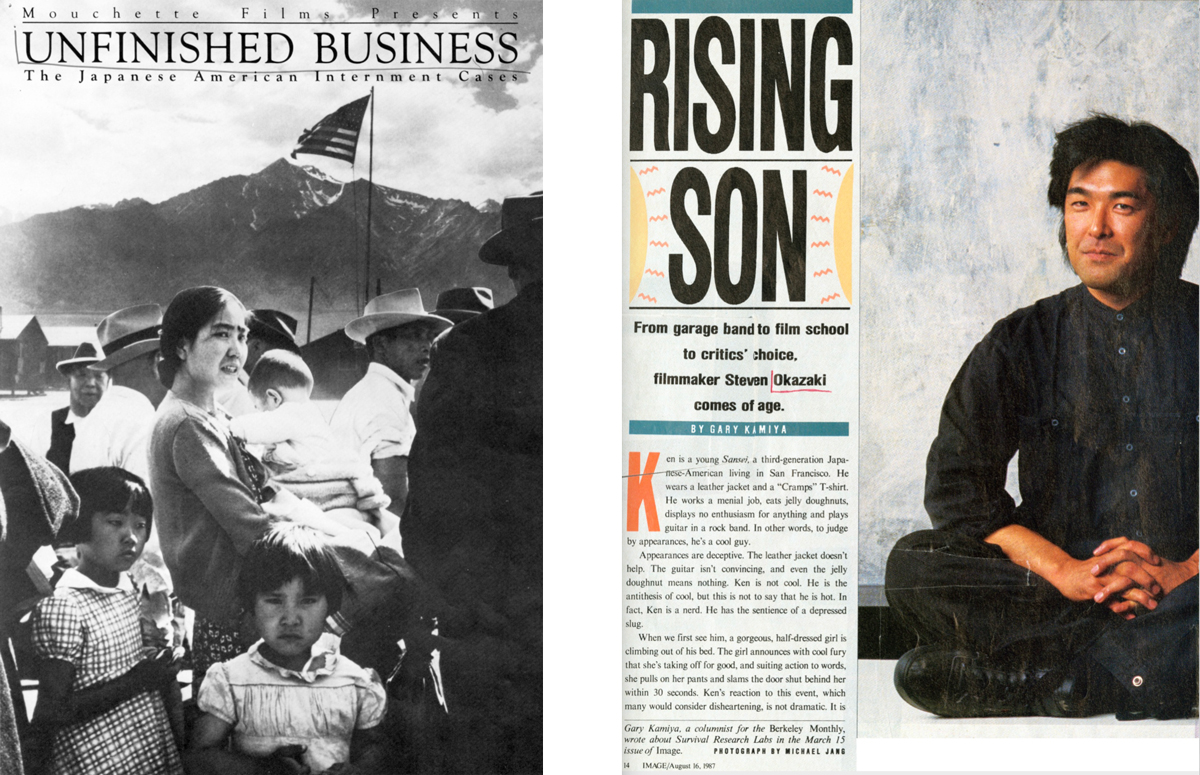 Left to right: Press kit for Unfinished Business, and 1987 interview with Image.

Another cornerstone of the Bay Area’s Asian American film community is the Academy Award–winning Steven Okazaki, whose career has brought Japanese American history and the Japanese American experience to the forefront, whether by capturing the stories of Hiroshima/Nagasaki survivors (White Light/Black Rain; Survivors), the forced internment of Japanese American citizens (Unfinished Business; Days of Waiting), or even in fictional tales of hopeful, vaguely talented rockers (Living on Tokyo Time). Okazaki’s work is also well-represented in the BAMPFA collection through many 16mm prints, while you can discover press kits, flyers, and reviews for his films through our CineFiles portal. 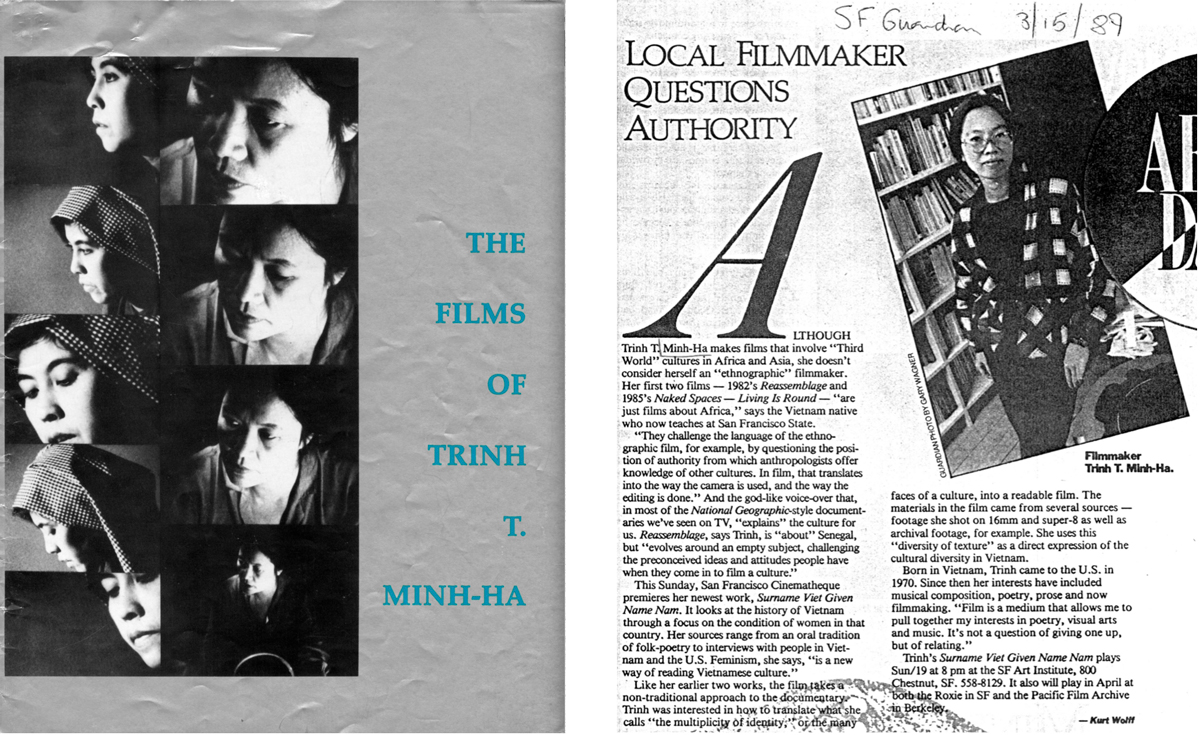 Through its campus connection, BAMPFA is especially fortunate to continually learn from the many Asian American scholars and teachers at UC Berkeley. One of our greatest colleagues is scholar/filmmaker/writer Trinh T. Minh-ha, “one of the leading American independent filmmakers” (New Directors/New Films) and the creator of such titles as Surname Viet Given Name Nam, Reassemblages, and A Tale of Love. The BAMPFA collection features many of her works, while CineFiles also offers an assortment of reviews and press kits, including retrospective catalogs from both Madrid’s Reina Sofía Museum and Lincoln, Nebraska’s Sheldon Film Theater.

Digging through the BAMPFA collection offers up several other intriguing discoveries, such as Curtis Choy’s groundbreaking activist documentary The Fall of the I-Hotel, Marlon Fuentes’s classic Filipino American essay film Bontoc Eulogy, and From Spikes to Spindles, a politically charged early documentary by Christine Choy, who would later go on to co-direct Who Killed Vincent Chin? with Renee Tajima-Peña. A few feature narratives on 35mm also appear, like Quentin Lee’s turbo-charged Shopping for Fangs (actually #starringjohncho, to borrow the once-famous hashtag), and Patrick Wang’s award-winning drama In the Family. Two early Deepa Mehta children’s shorts in the collection, co-directed with Paul Saltzman and made in collaboration with the Canadian Broadcasting Corporation, are Ming-Oi the Magician and Serema’s Mask.

Left to right: The Fall of the I-Hotel article, Rabbit in the Moon (dir. Emiko Omori) flyer, a.k.a. Don Bonus event invitation.

Both our CineFiles site and our collection of BAMPFA Theater guest recordings and Q&A’s offer more rewards for those curious about Asian American cinema. Online you can listen to the Bay Area’s very first Asian American Film Festival Q&A, where Wayne Wang debuts Chan Is Missing, Arthur Dong speaks on Sewing Women, and Emiko Omori discusses her work on what would become The Fall of the I-Hotel. Hear Trinh T. Minh-ha introduce her influential Surname Viet Given Name Nam in 1989, or learn from the beloved activist, filmmaker, and UC Berkeley professor Loni Ding during a 2001 Asian American Film Festival spotlight. (These digitized audio recordings are the tip of the proverbial iceberg; there are hundreds more available onsite on request at the BAMPFA Film Library & Study Center.) In CineFiles, discover coverage of the careers of Deepa Mehta, Mira Nair, and Ang Lee, or on influential individual titles like Spencer Nakasako’s a.k.a. Don Bonus, Christine Choy and Renee Tajima-Peña’s Who Killed Vincent Chin?, and Curtis Choy’s The Fall of the I-Hotel, among many others. (Don’t worry if you can’t find your favorite filmmaker, or if you, favorite filmmaker, can’t find yourself: We have actually only digitized about 10 percent of our entire collection.) Drawn from our paper collection of news clippings and ephemera, CineFiles has also become a kind of accidental repository of writings from the many independent newspapers and distributors that never made it into the digital age, such as San Francisco Chinatown’s East/West (or East West) newspaper, which published bilingually in Chinese and English from 1967 to 1989 before folding. Some of their film writing, including coverage of the nascent Asian American independent film scene, made it into our files, with over one hundred of its film reviews findable in CineFiles.

The BAMPFA Film Library & Study Center boasts an expansive collection of film festival and distribution catalogs, drawn from both local and global sources. BAMPFA was the longtime East Bay host of the San Francisco International Asian American Film Festival (now called CAAMFest), and the Library holds many of its catalogs, along with those of its distribution wing, the National Asian American Telecommunications Association (NAATA, now CAAM, or the Center for Asian American Media). The catalogs offer original writings and descriptions for many of the films, especially valuable as many titles would go on to be ignored or “made invisible” by mainstream publications afterwards. One can also track a festival’s growth through the years, from hand-mimeographs to glossy hundred-plus page, advertisement-filled booklets. 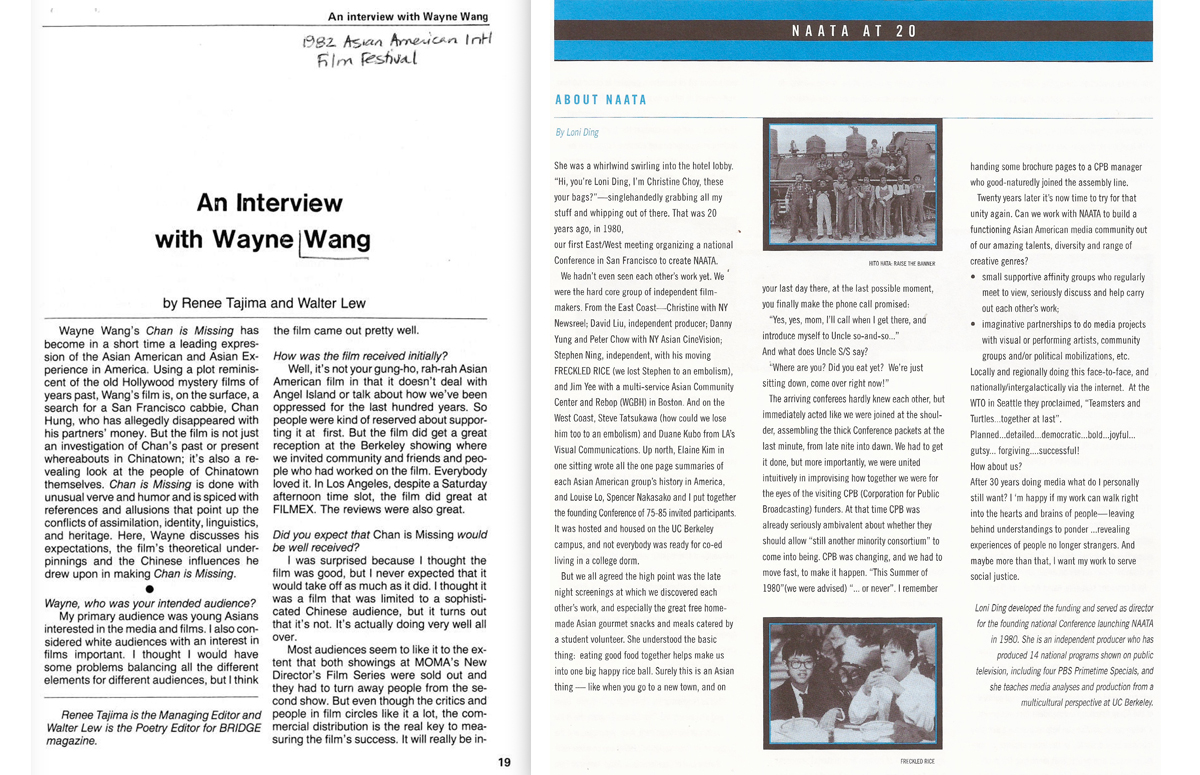 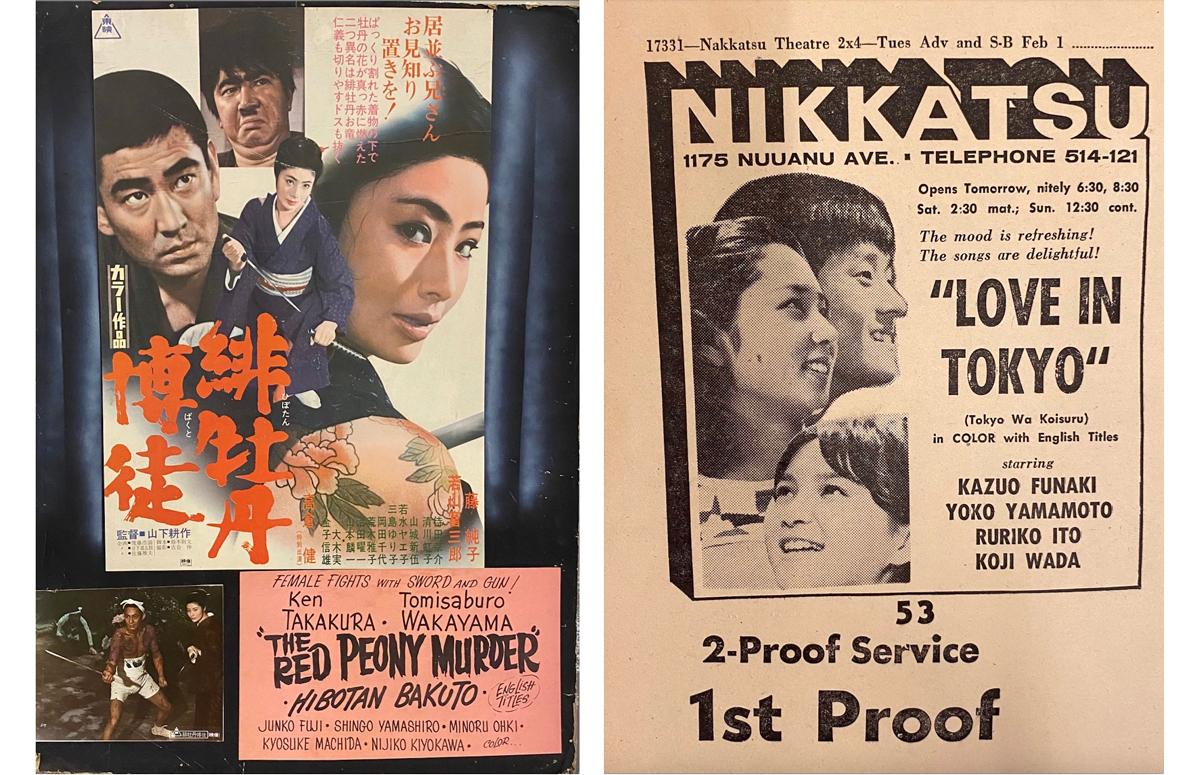 It’s not only film festivals that provide spaces for communities to view films from beyond the dominant Hollywood mainstream, of course. For decades, film theaters that catered primarily to immigrant and second-generation audiences could be found in any large-size city, specializing in anything from Yiddish-language films in 1930s New York to Mexican and Puerto Rican films in Chicago and Los Angeles, or the movie theaters in Chinatowns across the U.S. that showcase Hong Kong cinema. For immigrant communities, these theaters provided a way to keep in touch with the popular cultures of their homelands, and also gave patrons a chance to see people who looked like themselves still reflected as heroes and heroines, rather than relegated to the background of Hollywood tales. The history of BAMPFA’s expansive Japanese film collection (often touted as the largest outside of Japan) is rooted in this past; for years, Japanese American movie theaters could be found up and down the West Coast and Hawai'i, showing films imported from Japan. After the films completed their runs, though, the prints were considered disposable; after all, the Japanese studios thought, why bother paying to ship them back, when they had already made their money? Working with contacts in the Japanese system, the Pacific Film Archive’s founding director Sheldon Renan negotiated to have many of those prints donated to the archive instead, while future staff members like Stephen Gong (now the head of CAAM) and Film Collection Curator Mona Nagai kept the relationships going, ensuring that these films could be held onto for future generations. Working with longtime UC Berkeley professor Frank Motofuji, BAMPFA even published a catalog devoted to its Daiei Studio holdings, with subject headings as minute as “Department Store Comedy.” In later years, a generous donation arrived from the Koga family of Alameda, who ran many of the theaters in the Bay Area and even Hawai'i: boxes of movie stills, film posters, lobby cards, and scripts, even shipping and customs records, all providing insight into the inner workings of how Japanese films were promoted, and consumed, by Japanese American audiences.

The Library’s collection of film fan magazines and trade journals provides some eye-opening material for those studying the promotion and reception of film stars, and especially early Asian American stars such as Sessue Hayakawa and Anna May Wong. Here you can browse through and discover how these artists were framed and promoted, while our collection of studio movie stills and portraits offers up further visual insights.

Naturally, the BAMPFA Film Library & Study Center has numerous books on Asian American cinema and representation that are available to browse and consult. Some of the rarer titles include programmer and writer Roger Garcia’s Out of the Shadows: Asians in American Cinema, published by the Locarno Film Festival, and the seminal Moving the Image: Independent Asian Pacific American Media Arts.

While this blog post focuses on the Film Library & Study Center and Film Collection, we would be remiss not to mention one of BAMPFA’s most revered special collections, that of the singular, influential artist, poet, and writer Theresa Hak Kyung Cha, an “avant-garde of one,” as the Asian American Writers’ Workshop recently wrote. Her career is often analyzed more within an art museum, literary, or even performing-arts milieu, so it’s as an artist rather than a filmmaker that she is usually described. However, much of her work is based in—and a critique of—the moving image. Her film and video works can be viewed by appointment in the Film Library & Study Center, courtesy the Theresa Hak Kyung Cha Memorial Foundation.

Another creator of moving-images who falls more within the art world is Al Wong, the acclaimed painter/photographer/filmmaker/teacher whose 1977 16mm film Twin Peaks BAMPFA recently preserved, thanks to a grant from the National Film Preservation Foundation (NFPF).

While many of these works can be sampled online as noted, the remainder can be viewed, heard, or read onsite at the BAMPFA Film Library & Study Center once we can safely reopen. For more information, please visit us online or email us.