Off the Shelves: Hispanic and Latinx Collection Spotlight — Los Siete, Huelga!, Yo Soy Chicano, and More 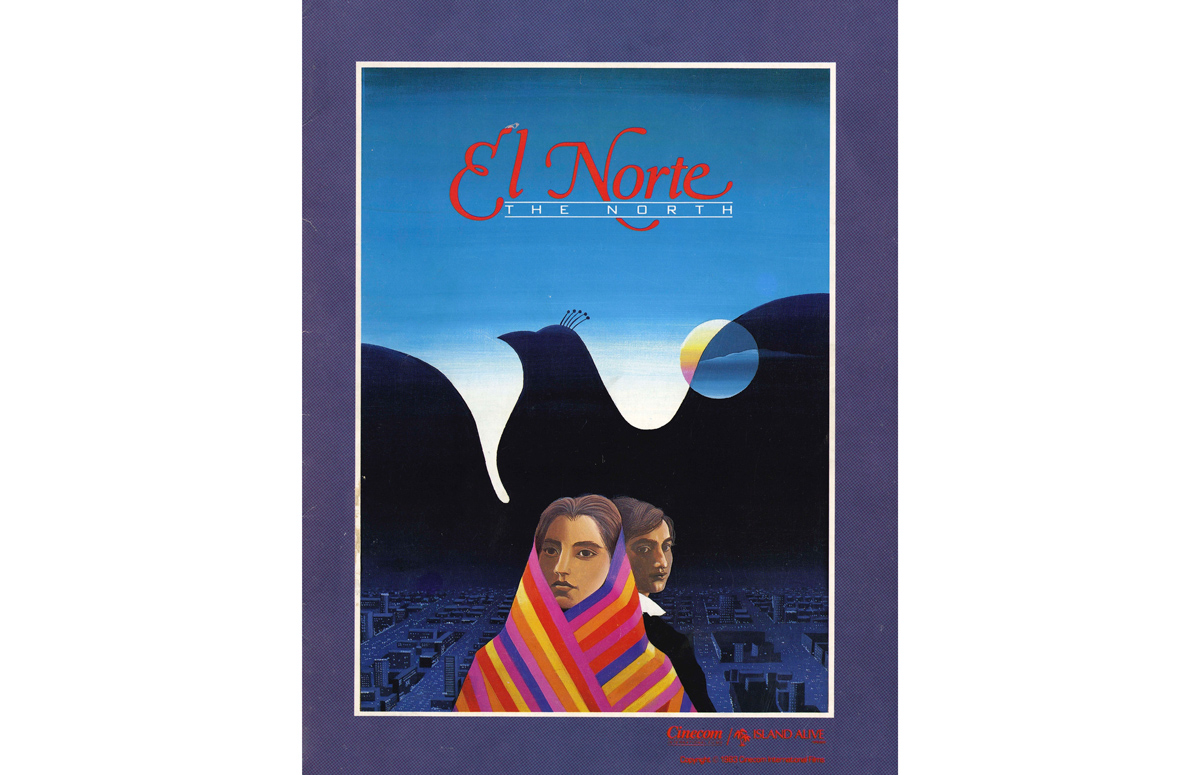 In honor of National Hispanic and Latinx American Heritage Month (September 15–October 15), we’d like to spotlight some rare films, audio recordings, and movie ephemera from our collections. From early activist documentaries glimpsing the early days of the civil rights movement and, rare press kits promoting some of the key films of Hispanic and Latinx American cinema, to audio recordings of guest Latin American filmmakers and actors, there’s much to discover in the BAMPFA film collection and Film Library & Study Center; even better, much of it has been digitized and made available to experience from the safety of home.

We have digitized several titles from our collection of films by Newsreel, an activist film collective originally formed in 1967 to bear witness to the political demonstrations, protest movements, civil rights struggles, and social unrest then sweeping the country. Aiming to take the means of production of news away from corporate television studios and place it in the hands of individuals actually involved with or affected by the issues of the time, Newsreel showed how documentaries could look when created on the street, “for the street.” 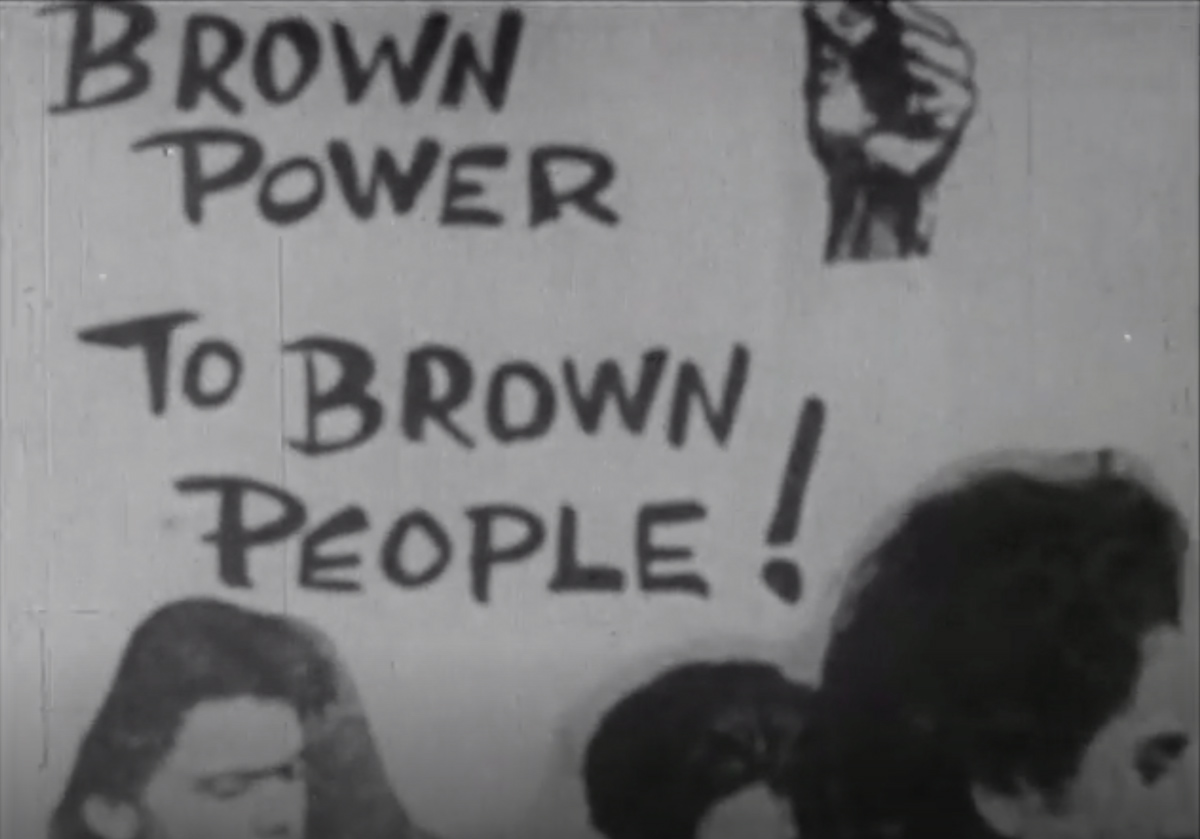 Newsreel’s 1969 piece Los Siete is of particular interest for Bay Area viewers. It showcases the aftermath of San Francisco’s notorious “Los Siete de la Raza” trials, when seven Latino education activists in the Mission district were accused of killing a policeman (who was later discovered to have been accidently shot by his partner’s gun). The trial, which finally ended in acquittal, galvanized the community, and crystallized the activism of the local Hispanic and Latinx American civil rights movement against racism and injustice; it also captured the attention of Latinx American activists nationwide.

From the city to the fields, Skeets McGrew and Newsreel’s Huelga! takes viewers into the first eighteen months of the Delano grape strike, the grassroots labor strike of mostly Mexican and Filipino migrant farmers against grape growers in the San Joaquin Valley. The film includes footage of and commentary by strike leaders, including Cesar Chavez and Dolores Huerta, and offers a moving and rousing portrait of the laborers, their lives, and their hopes for justice. 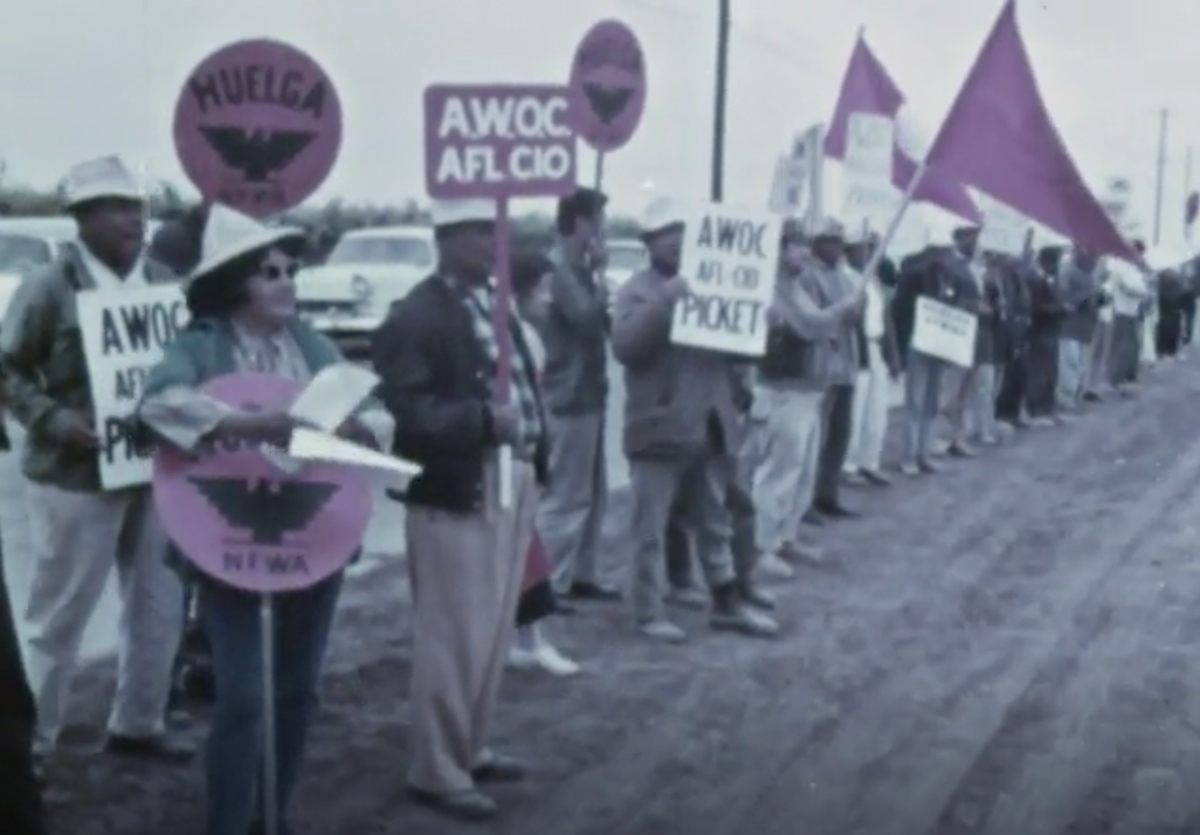 BAMPFA was able to digitize both of these fascinating documentaries in 2012, thanks to our participation in the California Audiovisual Preservation Project (CAVPP), which picked films and audio recordings from across California museums and archives that spotlighted California history. Both titles are available for viewing through the links above, and are hosted by the Internet Archive. A third Hispanic and Latinx American Newsreel documentary from our collection also available online (though not digitized by us), Rompiendo puertas (Break and Enter, aka Squatters) is Newsreel’s 1970 look at Puerto Rican activism and direct community action in the face of homelessness in New York City.

The BAMPFA film and video collection includes many other titles documenting Hispanic and Latinx American political movements. Newsreel’s 1971 El Pueblo se Levanta (The People Are Rising) hears from the Puerto Rican Young Lords activist group in New York City, showcasing its efforts to fight injustice and oppression. The first nationally broadcast documentary about Latinos, made by a Latino, Jesus Salvador Treviño’s pioneering Yo Soy Chicano (1972) gives a portrayal of the Chicano experience across history, with appearances by such key figures of the movement as Rodolfo “Corky” Gonzales and Dolores Huerta. El Teatro Campesino and Luis Valdez’s I Am Joaquin (1969) provides a filmic adaptation of Gonzales’s famed long-form poem of the same name (Valdez would later go on to direct Zoot Suit and La Bamba). Researchers could also experience multiple works from Mexico, such as our intriguing collection of 1940s and 1950s travelogues shot by Luis Barona Osorno. All films can be viewed with a few weeks’ notice in the BAMPFA Film Library & Study Center, either individually or as part of a group or class, once we reopen to the public. 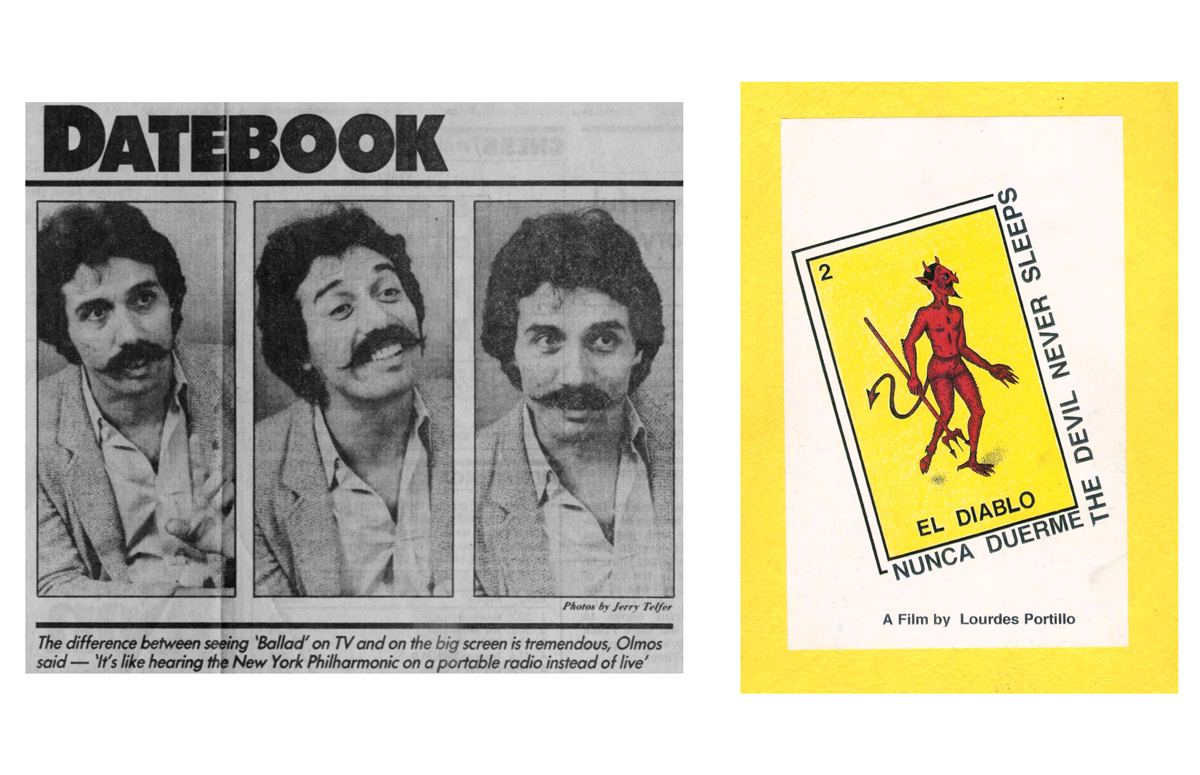 On our Cinefiles website, you’ll find multiple documents on various classic works of Hispanic and Latinx American cinema, whether press kits, film reviews and original receptions, or interviews with actors and directors. Examples include the striking Cannes press kit for Gregory Nava’s El Norte; a fabulous 1983 interview with Edward James Olmos by Judy Stone for The Ballad of Gregorio Cortez; the original distributor materials for San Francisco–based filmmaker Lourdes Portillo’s The Devil Never Sleeps; and the rare publicity kit for Salt of the Earth, the 1954 look at striking Hispanic and Latinx American miners in New Mexico. Among the many filmmakers and artists featured are Gregory Nava, Luis Valdez, Lourdes Portillo, and Edward James Olmos, along with such individual titles as The Ballad of Gregorio Cortez, Real Women Have Curves, and Alambrista! 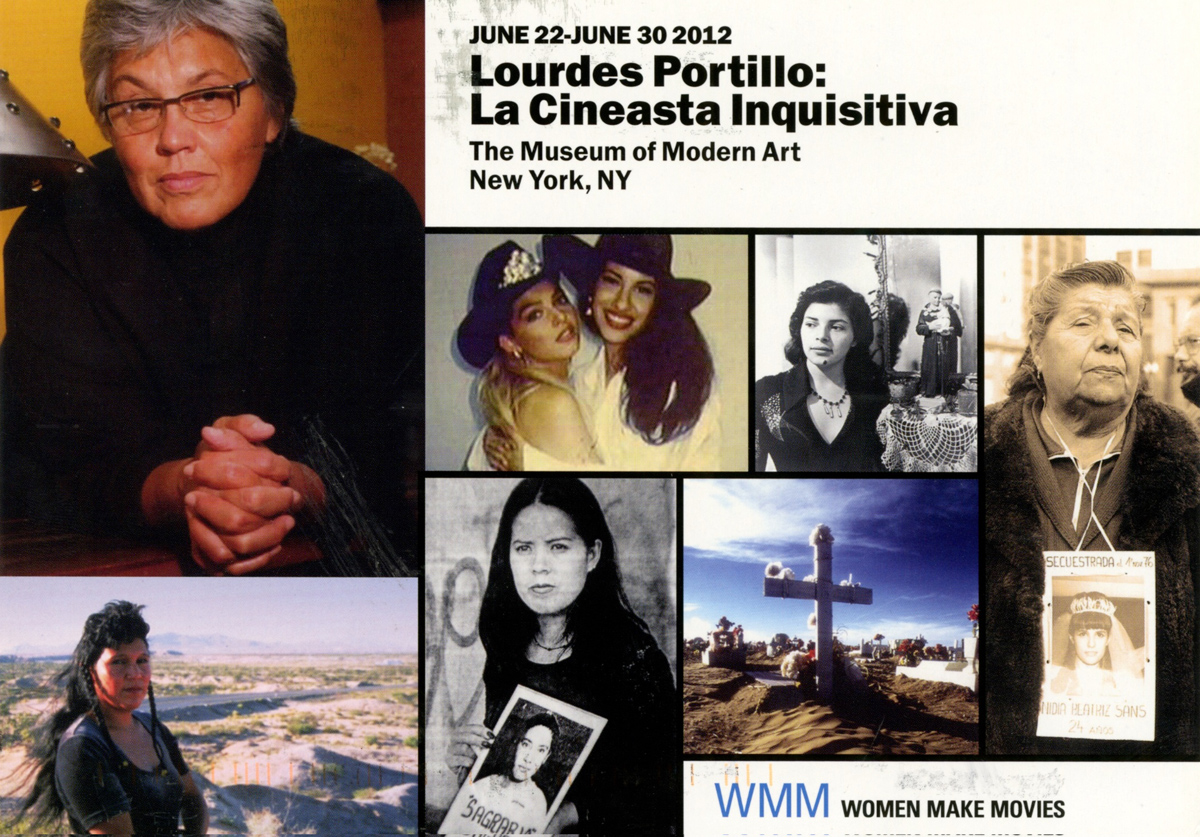 For those with more of an ear for history, head back in time with audio recordings of a few of the Latin American directors who visited us in the 1970s and 1980s. You’ll find recordings of Tomas Gutierrez Alea, Alejandro Grattan, and Jorge Preloran, among many others, plus a special appearance by Brazilian actress Sonia Braga in 1979, supporting the films Dona Flor and Her Two Husbands and The Lady In the Bus. These are from our recent CLIR project to digitize our recordings of film-related guest appearances from 1969 to 1986; to learn more about what we have, contact the BAMPFA Film Library and Study Center.

For those interested in learning more about our film and video collection and how to access the Library and Film Study Center holdings, please feel free to email us. (And remember, the library is open to everyone, not just BAMPFA members or UC Berkeley affiliates.) Once we are able to reopen, we hope to share these materials with you in person again.