Off the Shelves: Kinuyo Tanaka 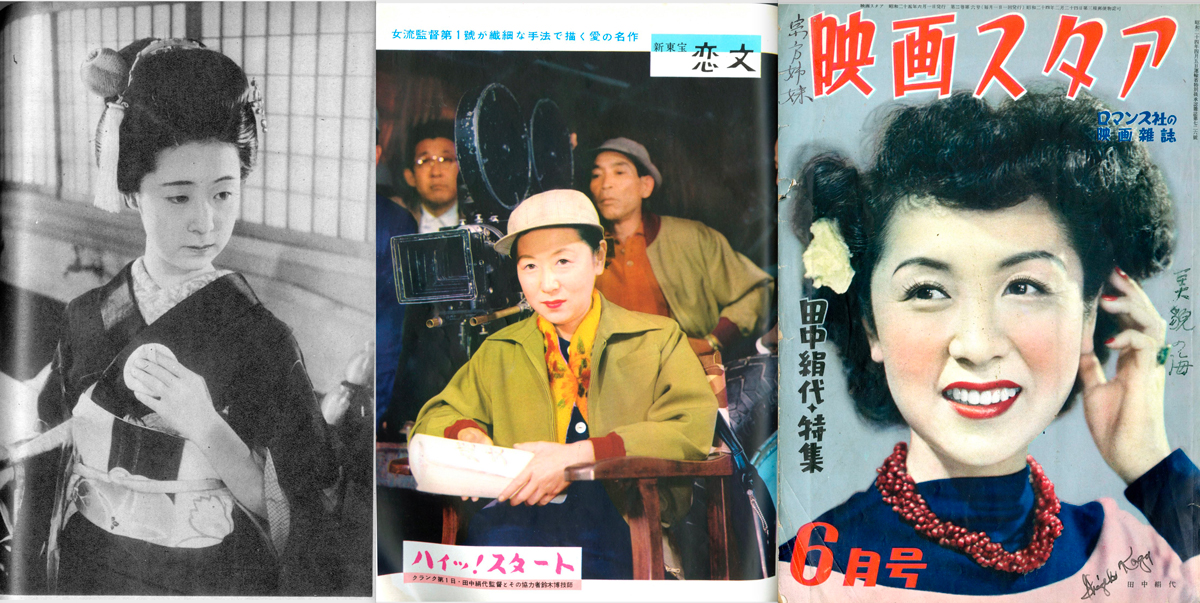 In honor of BAMPFA's Forever Kinuyo Tanaka retrospective (July 8–August 28, 2022), the BAMPFA Film Library & Study Center draws from its collection of rare Japanese film-fan magazines like Eiga Fan, Kindai Eiga, and more for this Off The Shelves post on Japan's most popular actress from the thirties to the fifties, and later its first major female director.

Over the course of her long career, Kinuyo Tanaka appeared in more than 240 films. Compared early on to Lillian Gish, she began acting in the silent era at age fourteen, and was a favorite actress of the era for such directors as Yasuziro Ozu (see July 16th’s Dragnet Girl) and Heinosuke Gosho. She starred in Japan’s first-ever talking picture, Gosho’s The Neighbor’s Wife and Mine, and immediately laid to rest the notion that her “country accent” would prevent success in the sound era. Instead, audiences embraced her all the more as “the girl next door.” The above Eiga Star overview, published in 1950, provides some fascinating images from her silent-era roles. (Film scholar Chris Fujiwara even noticed images from a lost Yasujiro Ozu film). “Her films of the early thirties present a studio-crafted feminine image . . . , through which shines Tanaka’s obviously genuine niceness.” —Fujiwara. 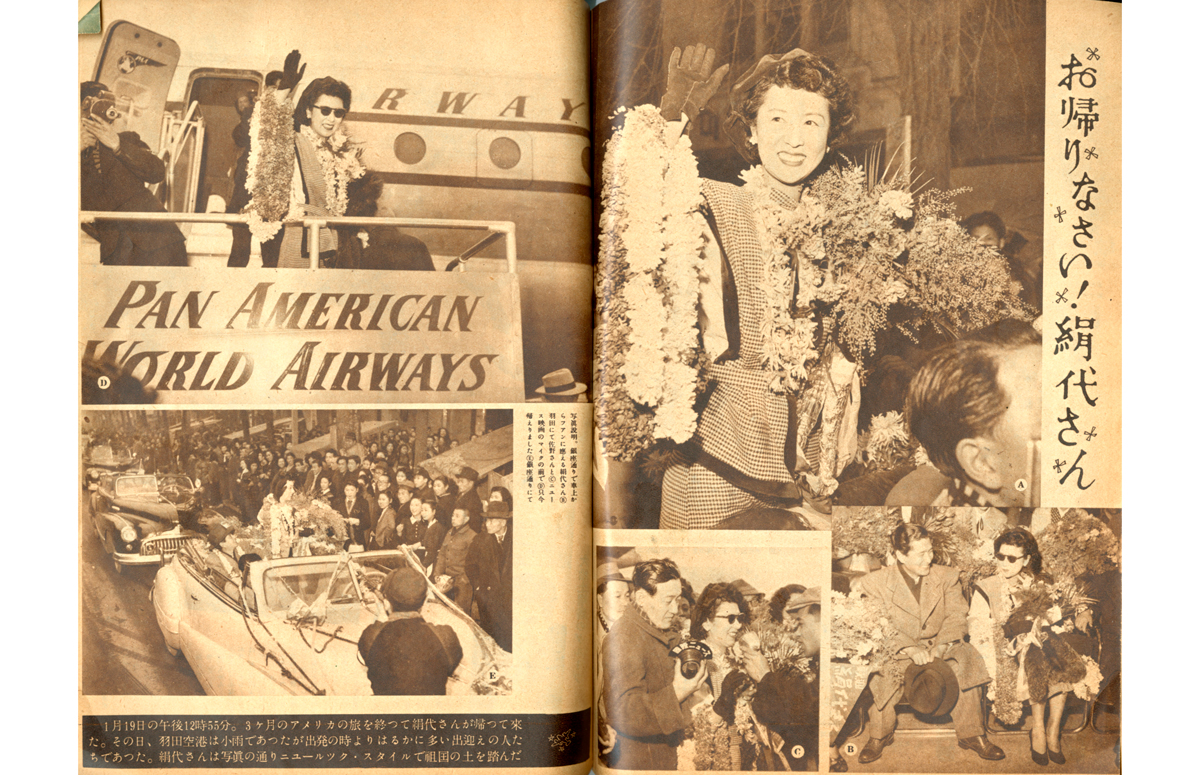 By 1949 Tanaka was one of the biggest stars in Japan, and entrusted to embark on a well-publicized goodwill tour of Hawai'i and the American mainland designed as a "soft-power" way to promote Japanese culture and art. "Japan's Bette Davis likes ice cream, kimonos" noted one American press blurb during her tour, which included a meeting with Davis and a Hollywood welcome party attended by Elizabeth Taylor, John Wayne, and more. Her return, though, caused controversy due to what the press condemned as an "Americanized" new persona, complete with blowing kisses in pant suits. "Wearing sunglasses and a half coat of silver fox, Kinuyo Tanaka returned from America," tisked-tisked an NHK newsreel. "She had set out dressed in impressive kimonos, but when she returned, her new look drew everyone's attention."

“A famous star who went abroad creating the image of an unsubmissive, non-conformist woman provided unhoped-for material for Japanese scandal newspapers,” recalled a 1977 CineJapan article. The trip, though, wound up solidifying her star persona's move from that "girl next door" to successful, modern, mature woman, a representative of a new version of Japan.

In the early-mid 1950s, as Tanaka enhanced her career with defining roles in such classics as Mizoguchi’s The Life of Oharu and Mikio Naruse's Flowing, she returned as a fixture in fan magazines, functioning as both a respected “elder statesman” and a stabilizing presence in a realm of ever-changing new personalities. A rare woman over the age of forty in a publicity industry dominated by teenagers and young women, she was styled in a modern, approachable manner. 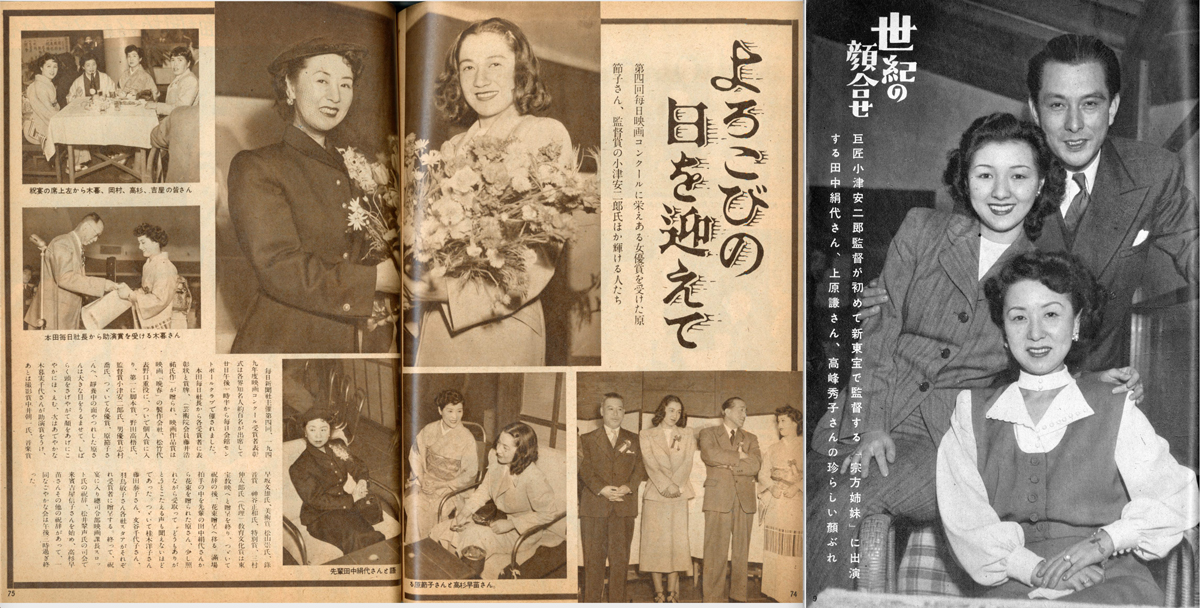 Befitting her newfound stateperson-like role, Tanaka also appeared with many of her younger peers, such as Hideko Takamine and Setsuo Hara. 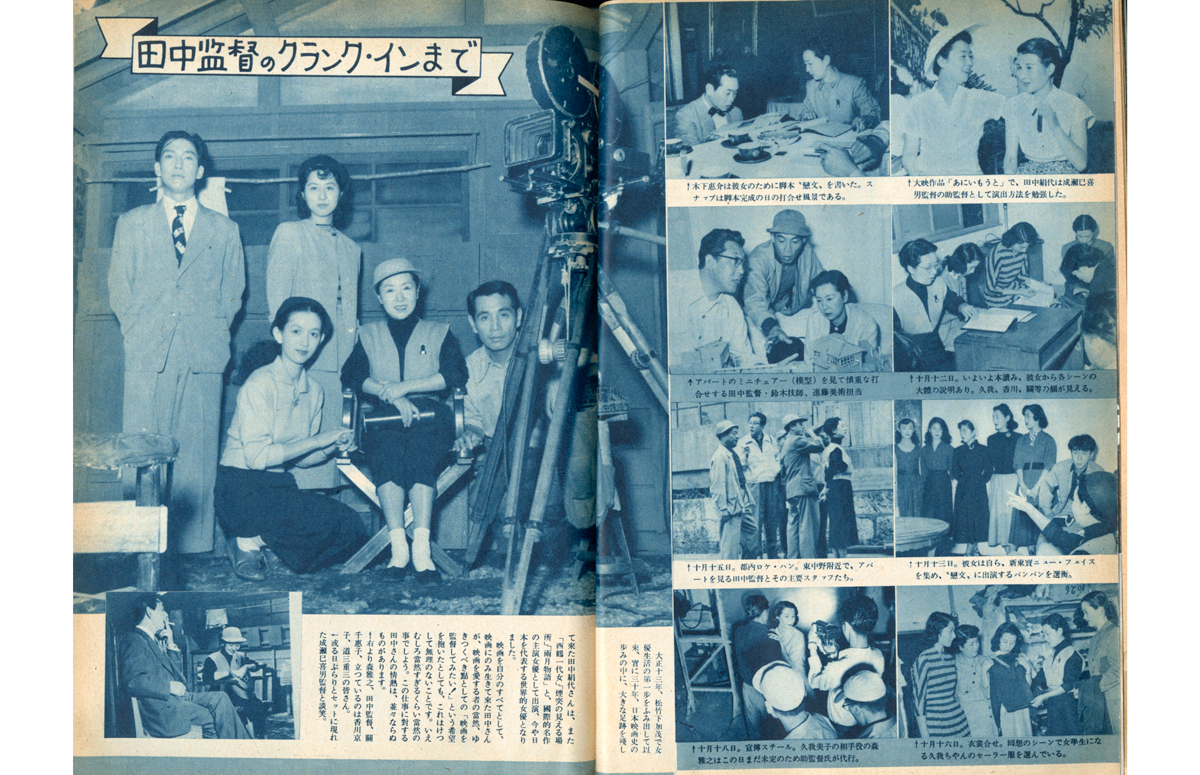 Behind the scenes with Eiga Fan, January 1954

In 1953 Tanaka moved behind the camera as well, becoming the first Japanese woman ever to direct and release a feature film (in 1936 the editor Tazuko Sakane directed a work that was never released). After she debuted with Love Letter, she would go on to direct five more films, all of which are included in this retrospective. “Skillfully using the experience and knowledge that she gained from working with some of the best directors of her time, Tanaka realized a long-held ambition to stand behind the camera herself and create art.”—Japan Society retrospective, 1993. 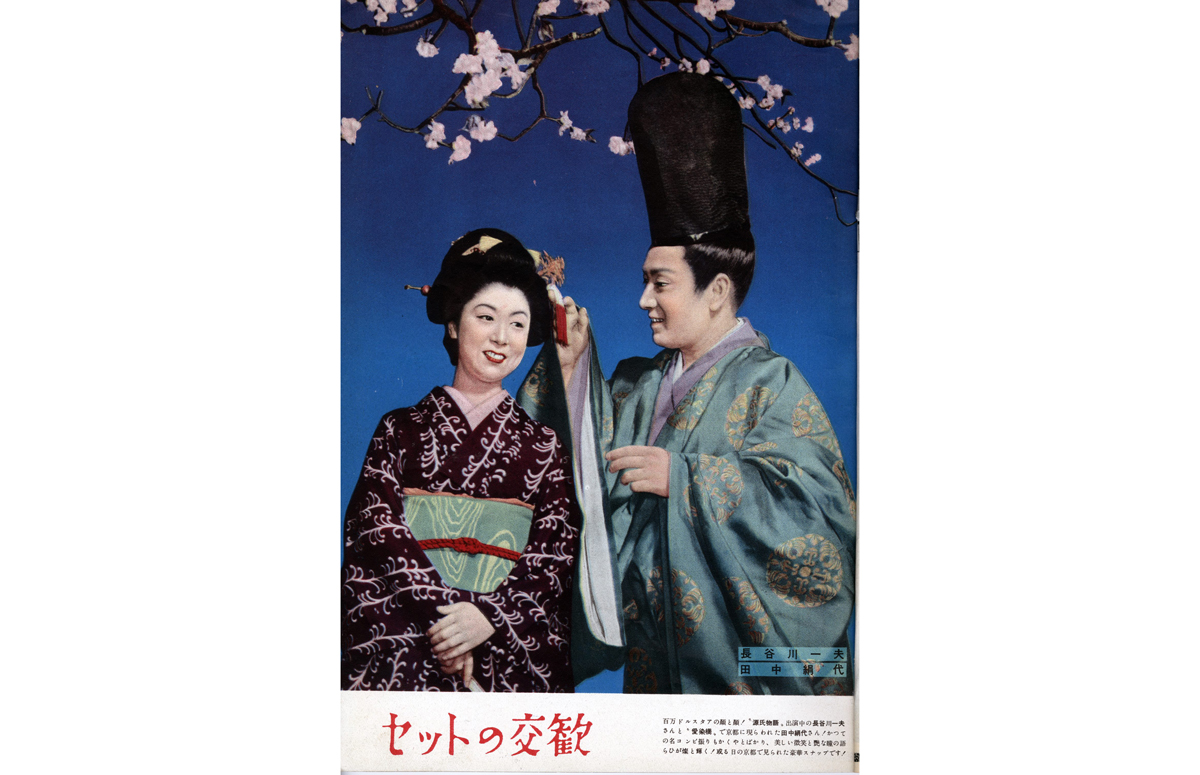 For over five decades, Tanaka was one of Japanese cinema’s most beloved actresses, making appearances into the 1970s (see our screening of 1975's Let's Go, Grandma). She passed away in 1977, with her legacy as an actress—and a director—secure. “Like the great Hollywood stars, Tanaka rarely appears to be acting. But instead of presenting a fixed screen persona, she makes each of the disparate characters she embodies appear to be her natural self," wrote William Johnson in the Jan/Feb 1994 Film Comment. Writing recently on this series of her directorial efforts, that magazine simply writes, "her work can excite us to pity, anger, wonder, and joy." 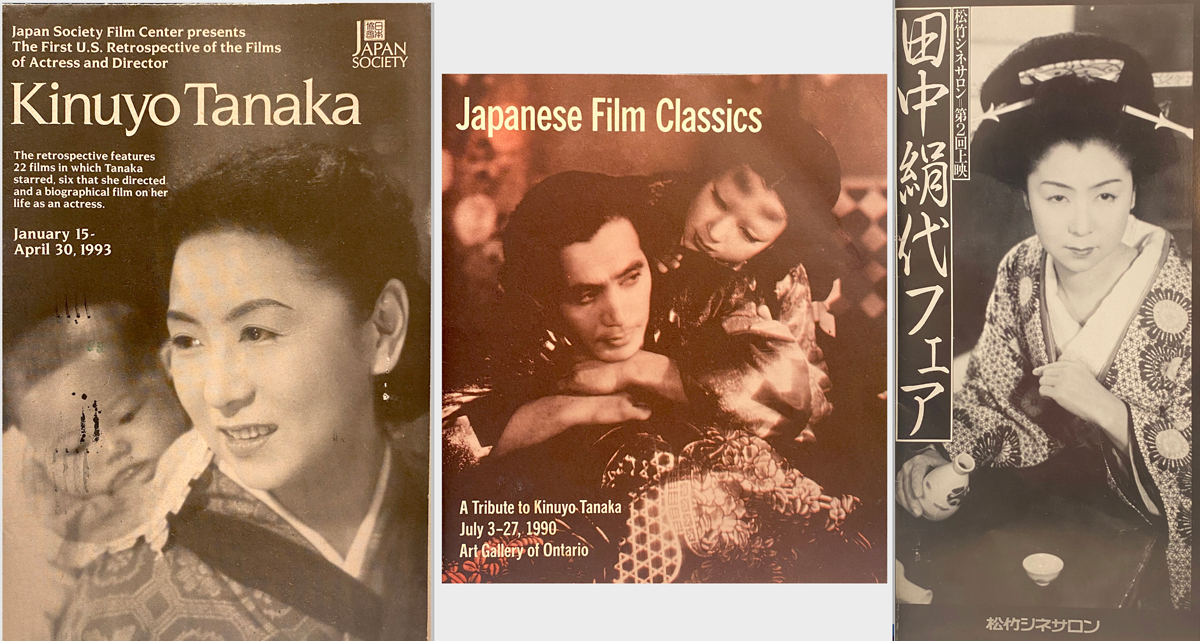 A small sampling of previous retrospectives, including The Japan Society, the Art Gallery of Ontario, and the National Film Center in Tokyo.

To see more Tanaka images from the BAMPFA Film Library & Study Center's collection, see its Instagram and again here, or visit its online collection of Tanaka ephemera at Cinefiles.

Thanks to all those who have donated their magazine collections and other materials to the BAMPFA Library through the years, especially the family of Koga Kogyobu and Mrs. Frank Motofuji. It is through their generosity that the Library holds such rare material.