Off the Shelves: This is Serious Business 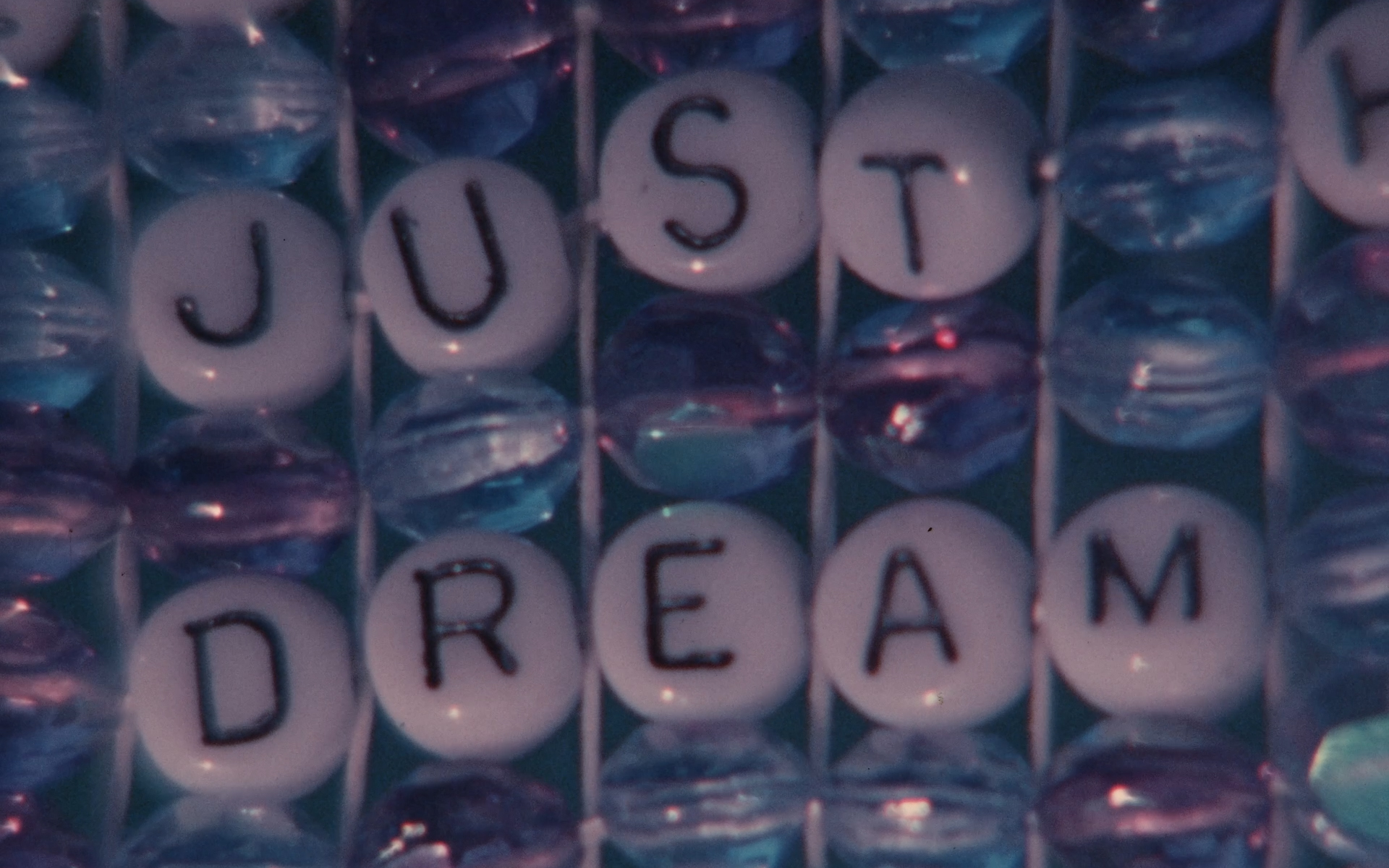 San Francisco Bay Area experimental filmmaking during the 1960s and 1970s is a period studded by the brilliant works of pioneering women artists. Working in support of one another and often collaboratively, they drew on their experiences as women for inspiration for their films. At the center of this community was Freude (1942-2009)—a filmmaker and trailblazing entrepreneur. Her Serious Business Company distributed many of the era’s most acclaimed films, but its lasting impact created a platform for discovering lesser-known works. In that same spirit, BAMPFA has focused our recent preservation efforts on the films of both influential and undervalued women filmmakers.

With generous support from National Film Preservation Foundation (NFPF), BAMPFA received two grants in 2020 to preserve fifteen short 16mm films from our collection, including five films by Dorothy Wiley (b. 1935); and, ten films distributed by the Serious Business Company (see the complete list of films below). To celebrate these projects, we curated a showcase featuring a selection of these works, including all the ones discussed below, as part of the film program Serious Business Company and Bay Area Women Artists.

Dorothy Wiley’s 16mm experimental films are made with the distinct perspective of a woman and a mother, and are underscored by dry humor, demonstrating Wiley’s sophisticated ability to convey an absurdist sensibility through a formally simple and direct filmmaking style. Wiley says about her filmmaking: “I like to film ordinary things I do and see every day because film makes it so easy to see the immense cosmic fearsomeness and beauty of everything.” Wiley transforms ordinary moments into sublime events. Whether by peering into a coffee filter in her 1977 film Coffee; documenting the Urechis caupo spoon worm (or penis fish) in The Weenie Worm or the Fat Innkeeper (1972); or composing an ode to letters in Letters (1972), Wiley invites the viewer to muse on poetics of everyday life.

Wiley made most of her films between the late 1960s and the end of the 1970s while living in Marin County,  California. Even with the acclaim she received in her early career, Wiley’s affiliation and collaboration with many of the scene’s prominent figures such as William T. Wiley, Bill Allan, Robert Nelson, and Gunvor Nelson, her remarkable solo contributions remain largely unknown.

Dorothy Wiley and Gunvor Nelson (b.1931) collaborated on their first film, Schmeerguntz (1966). A feminist juggernaut, Schmeerguntz is a collage film that intercuts found footage and magazine advertisements of  “picture perfect” women and wives with unfettered original footage depicting the realities of being a mother and a woman—from cleaning diapers and clogged drains to pregnancy and menstruation. It was met with immediate acclaim, winning First Prize at the Ann Arbor Film Festival that year. Wiley and Nelson would go on to make four more acclaimed films together: Fog Pumas (1967), Five Artists: BillBobBillBillBob (1971), Before Need (1979), and Before Need Redressed (1994). 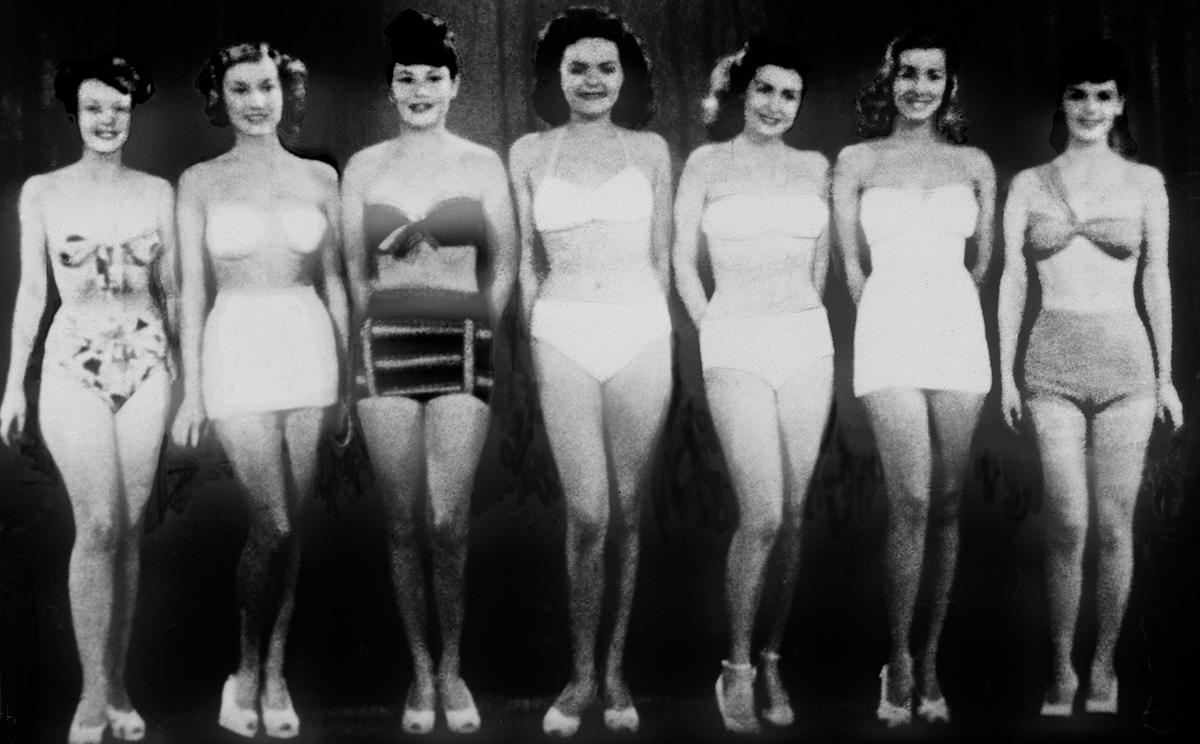 Still from Nelson and Wiley’s Schmeerguntz (1966). BAMPFA preserved this film in 1996 with funding from an American Film Institute Challenge Grant for Film Preservation.

A 2019 inductee to the Library of Congress’s National Film Registry, My Name is Oona (1969), Gunvor Nelson’s second film, is an undeniable masterpiece of the American avant-garde, highly acclaimed at the time of its release, with countless international screenings at festivals and museums, including Cannes and Oberhausen. Amos Vogel described it for the Village Voice as a film that “captures in haunting, intensely lyrical images, fragments of the coming of consciousness of a child girl.” Nelson, now 91 and living in Sweden, has had an illustrious career as a filmmaker and artist, and continues to make and exhibit work worldwide. 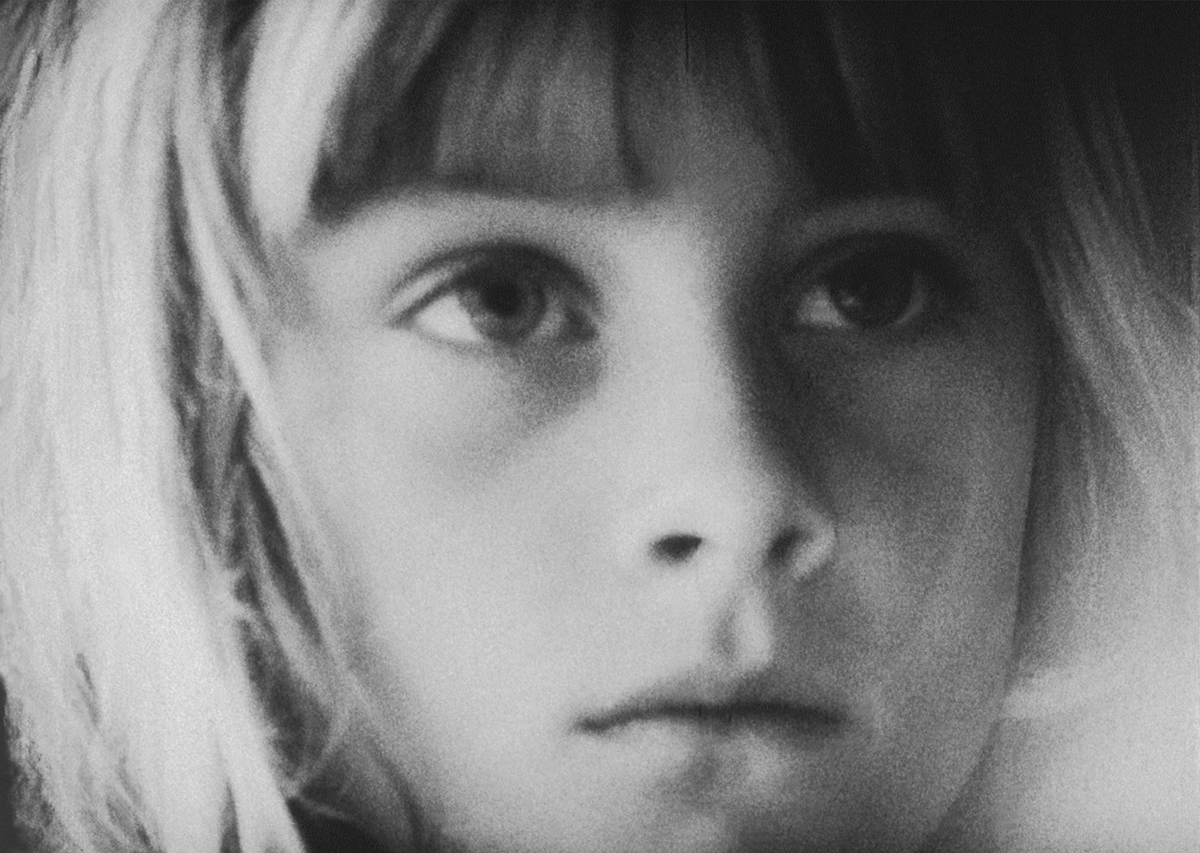 Wiley and Nelson distributed their works through Serious Business Company, founded and operated by Freude (formerly Freude Bartlett). In operation from 1972 until 1984, it was born out of her experience successfully distributing her then-husband Scott Bartlett’s films in the late 1960s. Starting with just forty titles, the Serious Business catalog’s focus was independent and experimental films but expanded over the years to include over 250 works including social documentaries, films for children, alternative healthcare films, and an extensive animation collection. The roster of filmmakers included James Broughton, Bruce Conner, Shirley Clarke, Barbara Hammer, David Pies, Chick Strand, Pat O'Neill, and Sally Cruikshank, among many others.

Freude had a short but productive filmmaking career, completing nine films between 1966 and 1974. Unlike her male contemporaries such as Jordan Belson or Bartlett, who in Freude’s words, “were making movies that reveal the ‘mysteries of the cosmos,’”1 Her films were deeply personal, exploring the realities of domestic and personal life. Karen Cooper from Film Forum (NYC) stated: “Freude combines the most glorious artifact of California living with a melange of domestic, maternal, and wholly personal symbols. The result is a free-flowing pastiche whose essence is the filmmaker’s love of husband, babies, friends, and the West Coast.” Freude’s Promise Her Anything But Give Her the Kitchen Sink (1969) articulates the complex identity of a fiercely independent and talented woman; and Sweet Dreams (1971), a profound expression of motherhood, is an aqueous and dreamy film that Freude described as a “poetic celebration of an earthly and tender aspect of female sexuality.”

From left: Stills from Freude’s Promise Her Anything But Give Her the Kitchen Sink (1969) and Sweet Dreams (1971)

Heavily involved in the women’s movement, Freude leveraged Serious Business to actively support women filmmakers and champion feminist film by creating an outlet for this work to a national audience. Through her efforts, she cultivated a modest but meaningful income for the filmmakers represented in the catalog by brokering print sales and rentals to educational and cultural institutions. Freude2 organized touring exhibitions at independent cinemas like Film Forum and the Landmark Theatres across the country, introducing this radically alternative cinema to general audiences. Honoring her legacy of inclusion, for this preservation project BAMPFA chose to group Freude’s films along with those of Gunvor Nelson, Alice Anne Parker (Severson), Karen Johnson, Josie (Ramstad) Winship, and Judith Wardwell, all artists Serious Business Company distributed. We thus pay tribute to Freude's ethos of collaboration as expressed through her artistic and entrepreneurial practices and to the sense of community that defined Bay Area filmmaking during that era. 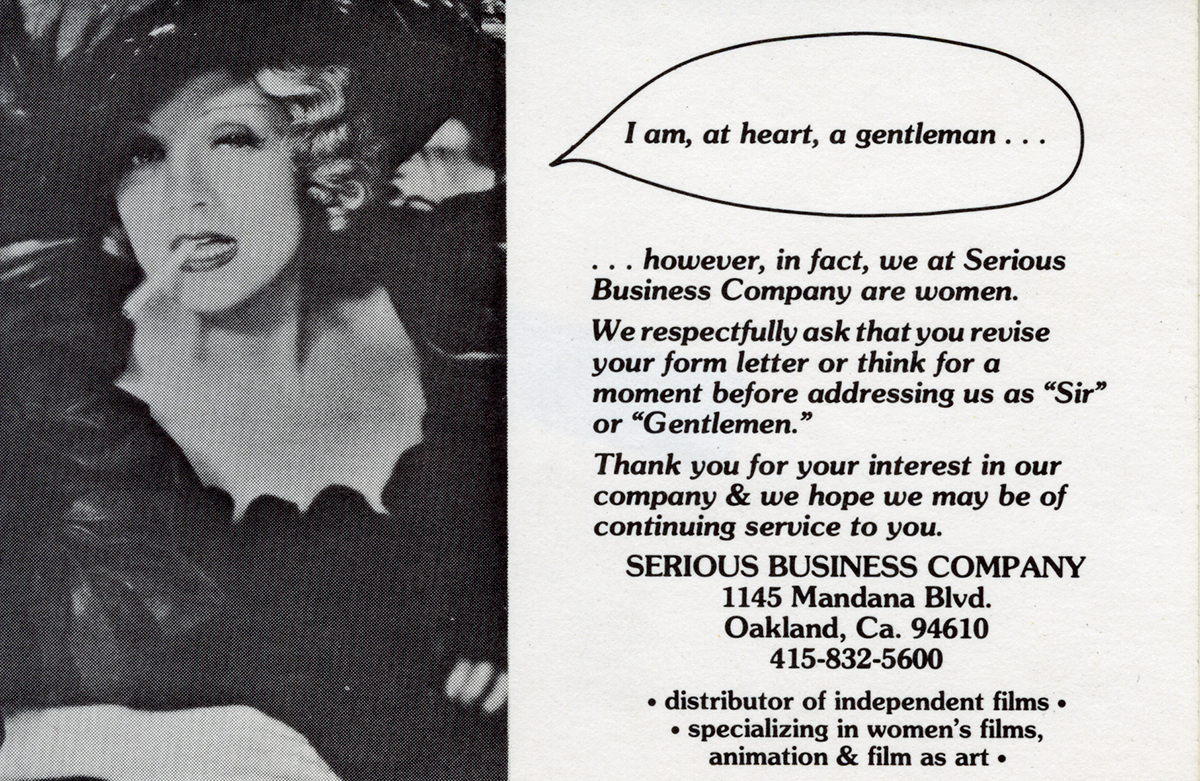 Films about sexual liberation and female sexuality were among the most popular films in the Serious Business catalog. Following on Schmeerguntz, Judith Wardwell’s Plastic Blag (1968) is a satirical critique of America’s obsession with sanitation and puritanical sexual repression where everything and everyone is laundered, sanitized, and covered completely in plastic—from the meat at the grocery store to your sexual partner. A trick animation film, Alice Anne Parker (Severson)’s I Change I Am the Same (1969) is a charming and cutting commentary on contemporary gender roles. Only 47 seconds long, Parker and Shelby Kennedy stoically pose, looking directly at the camera, and with each cut, their clothes switch—Parker wears the pants, Kennedy a bra, they both appear nude, and so on. Parker was immersed in the local filmmaking community during the late 1960s, teaching at the San Francisco Art Institute and providing entertainment at the Canyon Cinema Cinematheque screenings. She made six films between 1969 and 1974, including Riverbody (1970), a continuous dissolve of 87 male and female nudes, and then left filmmaking to become a psychic.

Left to Right: Stills from Judith Wardwell’s Plastic Blag (1968) and Alice Anne Parker (Severson)’s I Change I Am the Same (1969).

The films preserved in these two projects represent a singular moment in the history of the American avant-garde, which Freude’s pioneering work with Serious Business filmmakers helps present in context. Bringing the female perspective to the fore, the films are examples of the radical, countercultural, and experimental approach that became synonymous with Bay Area filmmaking during the 1960s and 1970s. The barriers these women fought to break down have eroded but are not gone. Almost sixty years on, the struggle for equality and autonomy over life and body continues. These films are a testament to the legacy of those who opened doors and cracked ceilings for future generations of women.

BAMPFA is committed to exhibiting, collecting, and preserving films of the Bay Area filmmaking community, and the work done on the Dorothy Wiley and Serious Business Company projects adds to this fifty-year-long effort. These films are now available for research and exhibition through this preservation effort. Contact BAMPFA Film Library and Study Center to learn how to access these films and other non-film materials we have related to them.

If you are interested in the Serious Business Company records, they can be accessed through UC Berkeley Bancroft Library.

Please email us if you want to learn more about our film and video collection and how to access the Film Library and Study Center holdings. (The library is open to everyone, not just BAMPFA members or UC Berkeley affiliates.)

2 Freude’s films were reviewed in Ms. Magazine and the New York Times prompting national attention followed by invitations to screen her works at museums and festivals including the Carnegie Museum of Art, Wexner Center for the Arts, Whitney Museum of American Art, New York Film Festival, and countless others.