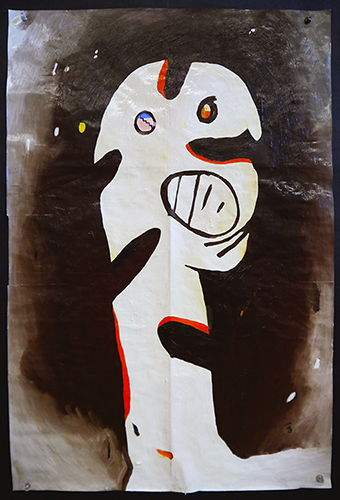 (Berkeley, CA) June 8, 2016 — For the forty-sixth consecutive year, the Berkeley Art Museum and Pacific Film Archive (BAMPFA) presents the University of California, Berkeley Master of Fine Arts Graduate Exhibition. This year’s presentation features the work of six extraordinary artists who bring innovative perspectives and approaches to art making. While the work cannot be categorized under a single theme or style, many of these artists use tactics of humor and “world making” to comment on serious contemporary issues, such as extinction, personal trauma, gentrification, and social and cultural melding.

Isaac Vazquez Avila incorporates elements of painting, collage, and sculpture to create works that evoke the power of living between cultures, specifically referencing the artist’s Mexican American heritage. Sculptor Michael Berens creates installations, videos, and drawings that celebrate the precariousness of objects within space, employing a playful and humorous approach to examine the world around us. Lark Buckingham’s films explore the ways that institutional monitoring and technology are threatening our individual privacy and safety, challenging the pervasiveness of social media networks. Working with materials ranging from glitter to bouncy houses, José Joaquin Figueroa creates installations that take viewers on transformative, even spiritual journeys through worlds that suggest dystopia rather than nirvana. Clement Hil Goldberg presents a new stop-motion animated film that explores queerness in the context of biological diversity and the extinction of lemurs in Madagascar, illustrating the animals’ struggle for survival while interrogating a human-centric world. Documentary photography and video form the basis of Jin Zhu’s creative practice, which addresses the vulnerability of the displaced, specifically those who have experienced the trauma of eviction in San Francisco due to gentrification brought on by the influx of tech companies and real estate developers.

Opening Reception
Friday, July 1, 2016; 6 p.m.
Join us for a reception to celebrate the 2016 MFA graduates of UC Berkeley’s Department of Art Practice. During the opening reception, looped screenings of MFA graduate Lark Buckingham's film Tattletale Heart will be shown in BAMPFA's Theater 2.
Open to BAMPFA members and guests of the artists

Tenants Speak
July 3, 2016; 4:30 p.m.
Join us for a short screening of video interviews with San Francisco tenants who fought their evictions, made by MFA artist Jin Zhu and Alexandra Lacey in collaboration with the Anti-Eviction Mapping Project. The filmmakers will be available at the screening for a Q&A with the audience.
Included with admission

Internationally recognized for its art and film programming, the UC Berkeley Art Museum and Pacific Film Archive (BAMPFA) is a platform for cultural experiences that transform individuals, engage communities, and advance the local, national, and global discourse on art and film. Founded in 1963, BAMPFAis UC Berkeley’s primary visual arts venue with its screenings of some 450 films and presentations of up to twenty exhibitions annually. BAMPFA’s mission is to inspire the imagination and ignite critical dialogue through art and film.