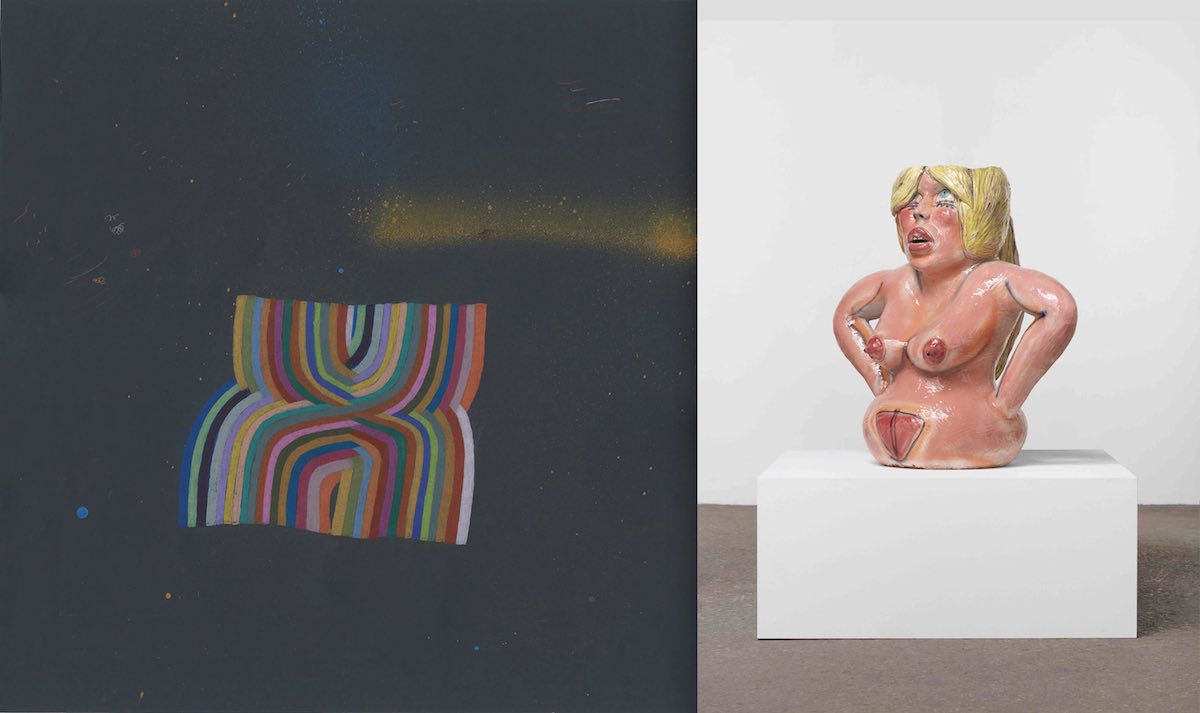 Both nationally established artists who maintain strong ties to the Bay Area, McCarthy and Neri began their practices as SFAI undergraduates in the early 1990s, where they were closely associated with the burgeoning postpunk scene that coalesced around San Francisco’s Mission District and also included such artists as Barry McGee, Margaret Kilgallen, and others. Following an extended period of creative collaboration in the first half of the 1990s, their practices diverged after Neri relocated to Los Angeles for graduate school, but they have remained in close creative dialogue ever since. While they typically work in different modes—Neri in figurative sculpture and McCarthy in abstract painting and drawing—the pair continue to share a range of aesthetic affinities, including an intuitive and process-oriented approach, a saturated palette, and a strong physical relationship to their respective mediums.

For their MATRIX exhibition, McCarthy and Neri have each created new work that advances the formal and aesthetic interests that have shaped their practices. In Neri’s case, these include large-scale sculptures that upend art historical representations of the female nude by exploring the motif in relation to her sculptural ceramic vessels—such as Two Women (2018), which asserts a confrontational sexual frankness that is characteristic of her recent work. McCarthy’s contributions include a new group of square-format paintings set on white backgrounds that display woven grids, double rainbows, and stacked, colored bars—including Untitled (2018), which the artist recently donated to BAMPFA’s collection. McCarthy is also creating a temporary, site-specific mural in BAMPFA’s exhibition gallery.

As the latest artists to participate in the MATRIX program, McCarthy and Neri join a distinguished roster of contemporary artists whose work has been showcased at BAMPFA over the past four decades, including Jean-Michel Basquiat, Louise Bourgeois, James Lee Byars, Sophie Calle, Jay DeFeo, Willem de Kooning, Juan Downey, Eva Hesse, Sol LeWitt, Shirin Neshat, Nancy Spero, Cecilia Vicuña, Andy Warhol, and earlier this year, Jay Heikes. In addition to their MATRIX exhibition—the artists’ first joint presentation since 2004—McCarthy and Neri have also collaborated on a unique work on paper in celebration of MATRIX’s fortieth anniversary; the black-and-white drawing, which unites the artists’ figurative and abstract styles, is available as a commemorative poster in the BAMPFA bookstore.

“For nearly thirty years, Alicia McCarthy and Ruby Neri have continually found inspiration and aesthetic experimentation from each other’s work, even as they themselves have become inspirations to a newer generation of West Coast artists,” said the exhibition’s curator Apsara DiQuinzio, curator of modern and contemporary art and Phyllis C. Wattis MATRIX Curator at BAMPFA. “Alicia and Ruby’s work is united by a tone of equanimity and curiosity about the relational, in-between moments of life—a fitting spirit in which to celebrate the fortieth anniversary of MATRIX.”

In conjunction with the opening of Alicia McCarthy and Ruby Neri / MATRIX 270, the pair present a lecture at BAMPFA on Wednesday, May 23 at 6 p.m. The event is free with museum admission.

Born in Oakland in 1969, Alicia McCarthy received her BFA from the San Francisco Art Institute in 1994 and her MFA from the University of California, Berkeley in 2007. McCarthy has shown her work in solo and two-person exhibitions at the Jack Hanley Gallery in New York, Berggruen Gallery in San Francisco, the V1 Gallery in Copenhagen, and Johansson Projects in Oakland, as well as in group exhibitions at The Lab, The Oakland Museum of California, the San Francisco Museum of Modern Art, and the UC Berkeley Art Museum and Pacific Film Archive. The artist’s work is also in the collections of the Millennium Iconoclast Museum of Art in Brussels, Facebook in Menlo Park, and the American Academy of Arts and Letters in New York. McCarthy received the Artadia Award in 2013, and the SECA Award from SFMOMA in 2017. McCarthy lives and works in Oakland and is represented by the Jack Hanley Gallery in New York and the Berggruen Gallery in San Francisco.

Ruby Neri was born in 1970 in Oakland, and received her BFA from the San Francisco Art Institute in 1994 and her MFA from the University of California, Los Angeles in 1998. Neri’s work has been featured in solo and two-person exhibitions at the Los Angeles County Museum of Art, Los Angeles Contemporary Exhibitions, and the China Arts Objects Galleries, and in group exhibitions at The Underground Museum, the Oakland Museum of California, the Hammer Museum, Yerba Buena Center for the Arts, Gallery Paule Anglim, and the Stephen Wirtz Gallery. She has completed artist residencies at the College of the Arts at California State University, Long Beach and the Archie Bray Foundation in Helena, Montana. Neri lives and works in Los Angeles, where she is represented by David Kordansky Gallery.

Alicia McCarthy and Ruby Neri / MATRIX 270 is organized by Apsara DiQuinzio, curator of modern and contemporary art and Phyllis C. Wattis MATRIX Curator, with Valerie Moon, curatorial assistant. The MATRIX Program is made possible with a generous endowment gift from Phyllis C. Wattis and the continued support of the BAMPFA Trustees. Additional support is provided by Hotel Shattuck Plaza.