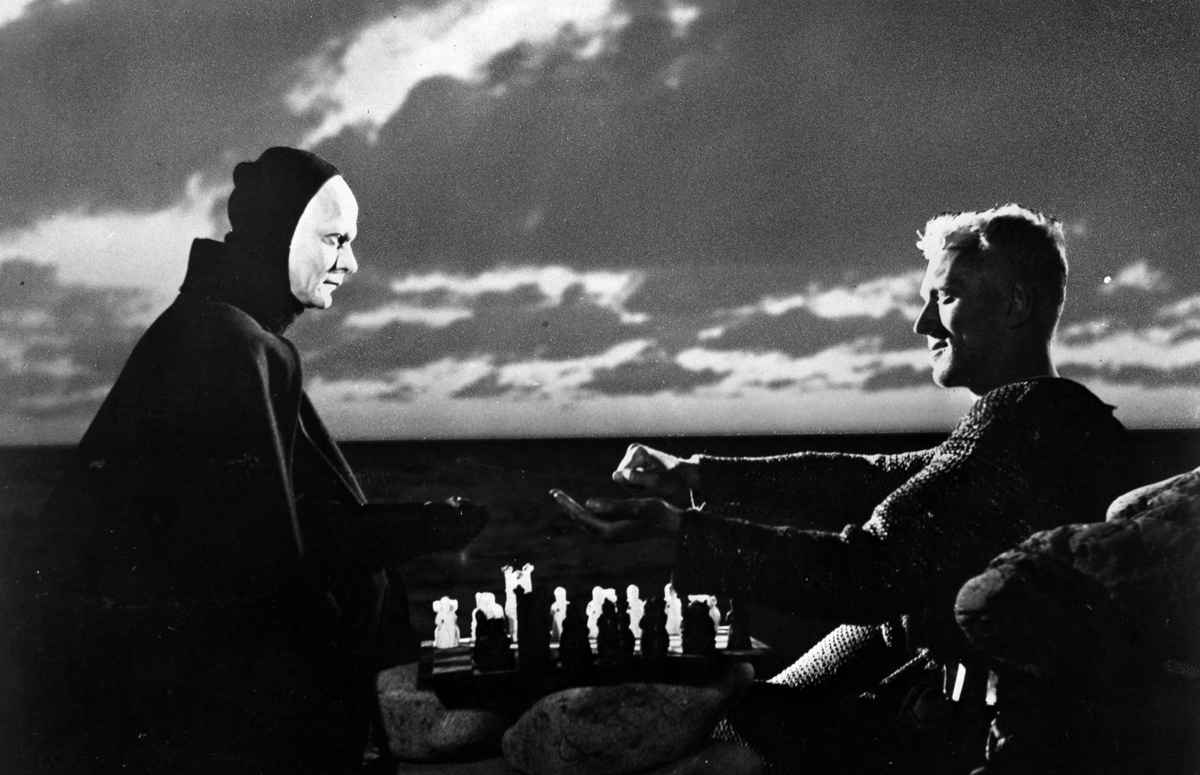 (Berkeley, CA) March 1, 2021—This spring, the UC Berkeley Art Museum and Pacific Film Archive (BAMPFA) partners with the California Film Institute and Smith Rafael Film Center to present Max von Sydow: The Best Stradivarius, a virtual tribute to the beloved Swedish film actor who passed away last year. The streaming spotlight features six of von Sydow’s most celebrated performances, accompanied by online conversations with scholars and luminaries of the Swedish film industry. The series launches on March 5; the films and online conversations will remain available through April 30.

A towering presence with a distinctive, deep voice, von Sydow (1929-2020) was acclaimed throughout his seventy-year career as an actor of extraordinary range, able to convey strength and fragility with equal finesse. He first rose to international prominence at the age of twenty-seven for what remains one of his most iconic roles, the medieval knight who plays chess with Death in Ingmar Bergman’s masterpiece The Seventh Seal. Von Sydow would appear in ten more films directed by the Swedish auteur, who praised the actor as “the first and the best Stradivarius that I have ever had in my hands.” He was also a frequent collaborator with another of Sweden’s great film artists, Jan Troell, who directed von Sydow in seven films—including the Academy Award-nominated two-part epic about Swedish settlers in the United States, The Emigrants and The New Land. In 1988, von Sydow himself would receive the first of two Oscar nominations for his performance in another immigration-themed saga, Pelle the Conqueror, a lyrical historical drama that won the Palme d’Or at Cannes.

Launching almost exactly one year after von Sydow passed away, Max von Sydow: The Best Stradivarius includes multiple livestream discussions with some of von Sydow’s closest collaborators, including Jan Troell and his wife and fellow filmmaker Agneta Ulfsäter-Troell; Katinka Faragó, the distinguished Swedish production manager and producer; and Liv Ullmann, who appeared alongside von Sydow in numerous films and later directed him in Private Confessions. As a prelude to these conversations, UC Berkeley professor Linda H. Rugg will offer an introductory lecture focusing on von Sydow’s biography and his work with Bergman on Friday, March 12 at 11 a.m. PST.

The full program for Max Von Sydow: The Best Stradivarius follows below, including dates and times for each corresponding conversation. After each livestream presentation airs, the conversations will be available through the conclusion of the series on April 30.

It may be folly to think that life and thus death could hold any secrets. With The Seventh Seal,

Bergman spoke to this modern query in a medieval setting rendered at once awesome and intimate in chiaroscuro. A knight, Antonius Block (Max von Sydow), and his squire Jöns return disillusioned from the Crusades to the hysteria of plague-infested fourteenth-century Sweden. On the shore Block encounters Death and challenges him to a game of chess, playing for time to perform one significant act in life. What is timeless about this existential passion play is the humanity of its characters, who seem to shun allegory like a kind of narrative death: Block, whom the Crusades took away from the real—the only proof of God—to the torment of the abstract; Jöns, cynical sensualist who articulates the void; Death himself, a picture of inconclusiveness; and the dreamer Jof and his wife, actors traveling into light.

A carriage bumps along a wooded path. Inside is a magician, Vogler (Max von Sydow), and his entourage, including his young assistant who in his better moments is a she, the magician’s wife (Ingrid Thulin); and an ancient auntie who has a sideline in love potions and, we suspect, eye of newt. They are a down-at-the-heels lot, curious about the devil out in the woods and about death, which joins them in their carriage. They are headed for a politically fraught performance, for the mute Vogler is mocked, even as he is sought, for his “animal magnetism.” And no one does animal magnetism better than von Sydow. We see hints of Persona (silence as the last refuge of the artist), Fanny and Alexander (family theatrics as its own refuge), and Scenes from a Marriage (in fact, two). But with its fairytale landscape, Expressionist sets, and old-dark-lab sci-fi, The Magician asks to be taken on its own terms. Max the mesmerist and Bergman the magician, each with his “apparatus,” effect the willing suspension of belief.

Hour of the Wolf intertwines supernatural mysteries with the no less mysterious torments of creativity. Alma (Liv Ullmann) tells of her life on a remote island with her artist husband (Max von Sydow), who has disappeared, leaving only his diary. The strange occurrences she relates invoke the waking nightmares of gothic horror, yet in creating this eerie tale, Bergman drew on his own experiences of isolation on the island of Fårö: “The demons would come to me and wake me up, and they would stand there and talk to me,” he said.

Based on Vilhelm Moberg’s popular novels about a Swedish farming family’s migration to America in the mid-nineteenth century, The Emigrants, along with its follow-up The New Land, constituted the most expensive Swedish film production up to that time. The Emigrants received Oscar nominations for Best Picture, Actress, Director, and Adapted Screenplay—rare honors for a foreign film. Max von Sydow had made appearances in director Jan Troell’s earlier work, and Liv Ullmann, often identified with Bergman’s films as closely as her costar, has said Kristina is her favorite role. Among the many distinctive qualities of Troell’s approach to cinema is the fact that he is the cinematographer of his own films, infusing his epic subject with emotional intimacy and visual poetry.

With its strong performances and striking location cinematography, Pelle the Conqueror earned Bille August international acclaim as a director. Max von Sydow was nominated for an Academy Award for his immensely moving performance as Lasse Karlsson, an aging farmhand and widower who emigrates from poverty-stricken Sweden to the Danish island of Bornholm with his young son Pelle (Pelle Hvenegaard) in search of a better life. Adapted from volume one, Boyhood, of the four-part novel Pelle Erobreren by the Danish proletarian writer Martin Andersen Nexø, this nineteenth-century epic deals with class inequities in rural society, where Lasse and Pelle live under impoverished conditions yet hold out some hope for the future. Story has it that Ingmar Bergman watched the film seven times before inviting August to direct The Best Intentions (written by Bergman).

Bergman’s second color film is one of his most economical—spare, straightforward, but in no sense lightweight. Four people have escaped to a remote island off the Swedish mainland but find that they cannot flee the injustice, violence, and guilt of modern life. An intricate four-way relationship among Max von Sydow, Erland Josephson, Bibi Andersson, and Liv Ullmann is played out against a mysterious situation in which an anonymous sadist is killing animals on the island. Bergman interrupts the narrative with two unusual devices that only serve to increase the profundity—and believability—of the film: each character is given a lengthy passage in which to reveal the most important incident in his or her life, and each actor has a moment in which to comment on the role being played.

Max von Sydow: The Best Stradivarius is organized by BAMPFA Director of Film and Senior Film Curator Susan Oxtoby and Richard Peterson, Director of Programming at the Christopher B. Smith Rafael Film Center. The series is presented by the University of California, Berkeley Art Museum and Pacific Film Archive and the California Film Institute, and with the support of the Consulate General of Sweden, San Francisco, and the Barbro Osher Pro Suecia Foundation.

About the California Film Institute

The California Film Institute (CFI) is a non-profit organization dedicated to celebrating and promoting film and media arts through the presentation of the internationally acclaimed Mill Valley Film Festival celebrating its 43rd year in 2020 and DocLands Documentary Film Festival, the ongoing cultivation of the next generation of filmmakers and film lovers through CFI Education, which features a broad range of activities, including screenings, Q&A sessions and seminars with top international and local filmmakers and industry professionals as well as a rich program of classes and hands-on-workshops. Additionally, CFI acts as a year-round film-centric town hall with a diverse calendar of programming at the Christopher B. Smith Rafael Film Center, one of the leading non-profit independent theatres in the country. The art of storytelling through film enables CFI to engage 275,000 guests throughout the year with films and events that entertain as well as address a breadth of social, environmental, and cultural issues. CFI is also the majority owner of the Sequoia Theater in Mill Valley, California. Additionally, through CFI Releasing, a national non-profit film distribution initiative, CFI enables filmmakers and sales agents to collaborate with U.S. independent exhibitors, giving nationwide audiences access to quality independent film and promoting this work as a valuable artistic and educational medium conveying different visions, viewpoints and cultural perspectives.

CFI relies on the generosity of its community to sustain these core programs. The invaluable support of our sponsors, foundations, and individual donors ensures our continued success. For more information visit cafilm.org