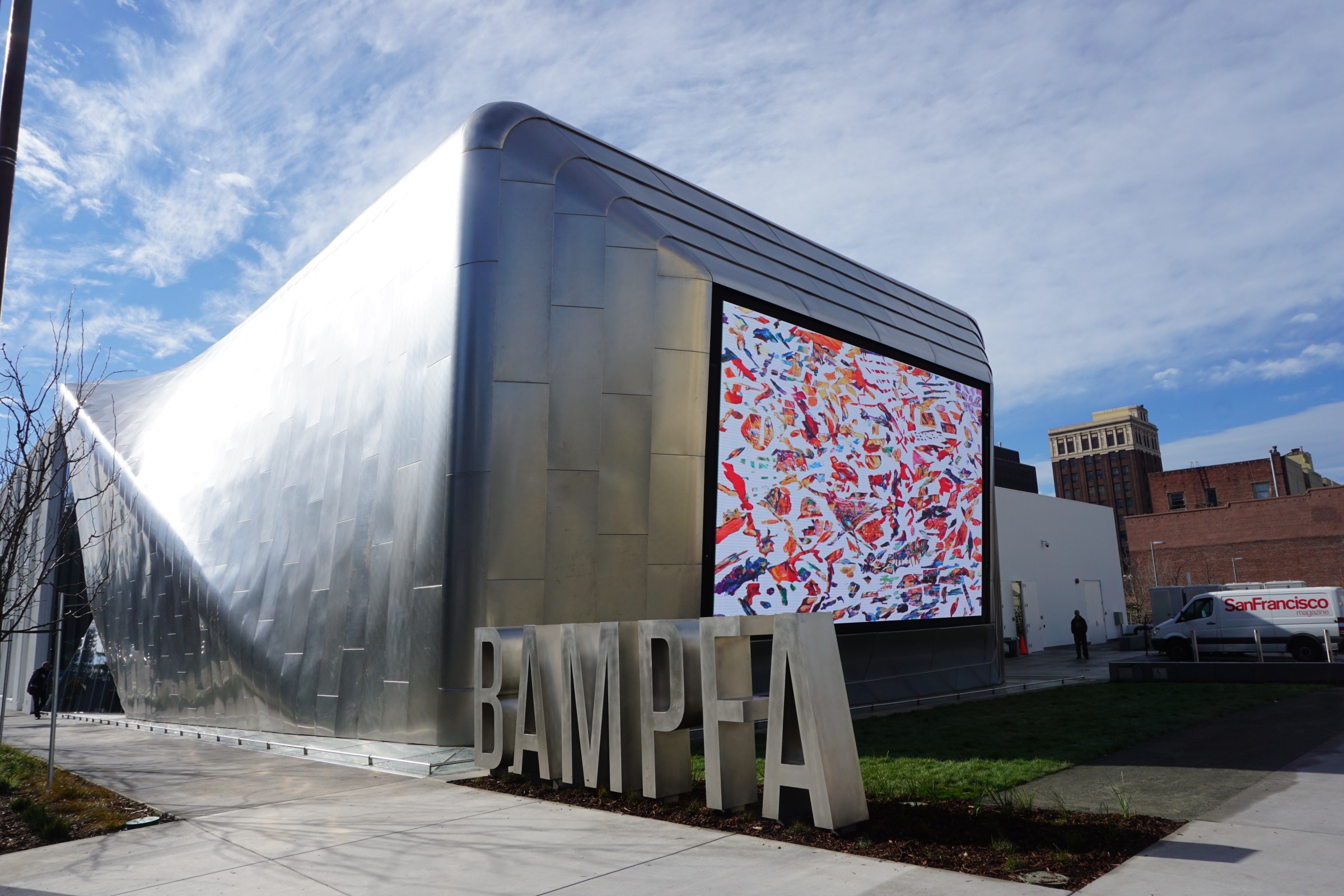 (Berkeley, CA) July 13, 2021—The UC Berkeley Art Museum and Pacific Film Archive (BAMPFA) announced today that it will resume in-person film screenings next month, beginning with a series of free programs presented on the museum’s massive outdoor screen. BAMPFA’s return to in-person film programming will begin on Thursday, August 12 with a free screening of Barbara Lee: Speaking Truth to Power, the first of three outdoor screenings celebrating iconic trailblazers from the Bay Area and beyond. BAMPFA’s Barbro Osher Theater will reopen for indoor screenings beginning Wednesday, September 1, and the theater will serve as the exclusive East Bay venue for the Mill Valley Film Festival the following month.

“It’s thrilling to welcome our community of filmgoers back to BAMPFA after this difficult year, and I can’t imagine a better way to do so than with a series of free screenings presented al fresco on the museum’s outdoor screen,” said Susan Oxtoby, BAMPFA’s director of film and senior film curator. “For nearly eighteen months, we’ve been deeply moved by the support of our devoted audiences, who have continued to engage with BAMPFA’s film programming during our pivot to virtual cinema. We’re delighted to invite our audiences to return in person now that restrictions have been lifted.”

Presented in partnership with the Downtown Berkeley Association, BAMPFA’s free outdoor film series will feature three acclaimed documentaries from the past year, each of which highlight the contributions of artists and activists who have deep connections to the Bay Area. Attendees are invited to set up lawn chairs and blankets in front of BAMPFA’s outdoor LED screen, located on Addison Street less than five minutes’ walk from the Downtown Berkeley BART station. Dates and descriptions for the outdoor screenings follow below, and screener links are available on request.

With unique access to a sitting member of Congress, her family, and her colleagues, award-winning Bay Area filmmaker Abby Ginzberg profiles East Bay Congresswoman Barbara Lee and her decades of advocacy in this compelling and inspiring documentary. Barbara Lee: Speaking Truth to Power follows Lee from her hometown as she reminisces on her early years as a single mother dependent on federal aid, to her work with the Black Panthers, and her pivotal friendships with Shirley Chisholm and Ron Dellums.

Sisters with Transistors highlights the work of nine pioneering female composers who continue to inspire new generations and influence how music is made and appreciated. Illustrated with a sensuous montage of archival materials and interviews, the documentary features Clara Rockmore, whose virtuosic performances on the theremin vetted its orchestral viability; Delia Derbyshire, whose haunting compositions—like the indelible Doctor Who theme—were realized before electronic music became commonplace; Laurie Spiegel, whose pioneering software harnessed the power of microcomputers in musical composition; and Berkeley’s own Suzanne Ciani, whose synthesizer compositions crossed over into concert halls, cinemas, and commercials.

This culture-changing documentary draws on archival materials and intimate stories from campers, camp counselors, journalists, and activists to show how a summer camp for disabled teens in 1971 helped spark a civil rights movement for people with disabilities. The film follows the story of the disability rights movement from the Catskills through Berkeley and ultimately on to Washington DC, where it led to the historic passage of the Americans with Disabilities Act.

Following the launch of its outdoor film series, BAMPFA will reopen the Osher Theater for indoor film screenings starting on Wednesday, September 1. Films will initially screen on Wednesday evenings, beginning with the return of two annual film series that will play on alternating weeks: Alternative Visions, which showcases the best of historic and contemporary avant-garde cinema; and Documentary Voices, which highlights important voices in international documentary film. BAMPFA will resume its standard five-day weekly film schedule beginning on October 8 with the opening of the Mill Valley Film Festival, when the museum will renew its role as the Festival’s exclusive East Bay venue.

Full programs for each of these series will be announced later this summer; visit bampfa.org for the latest program updates, as well as the current safety guidelines related to Covid-19. BAMPFA will continue to offer virtual film rentals on its website throughout the fall, and the museum’s art galleries have been open to visitors since May 2021. The selection for this year’s Mill Valley Film Festival will be announced in September; visit mvff.com for the latest Festival updates.