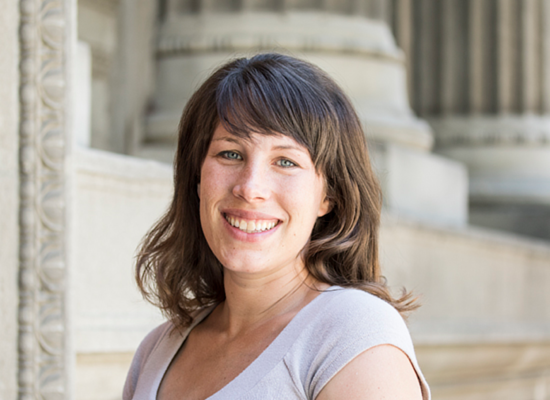 (Berkeley, CA) April 26, 2022—The UC Berkeley Art Museum and Pacific Film Archive (BAMPFA) announced today the appointment of Katelyn Nomura-Weingrow as the museum’s next Director of Administration and Strategic Initiatives. Nomura-Weingrow brings to BAMPFA more than twenty years of experience as a senior administrator in academia and the arts, including in her current role as the Interim Executive Director and Assistant Dean of Students at UC Berkeley’s Student Union. She has served in multiple roles at UC Berkeley over the past decade and has also held past positions at New York’s Museum of Modern Art (MoMA) and Sotheby’s.

In her new role, Nomura-Weingrow will oversee all aspects of BAMPFA’s day-to-day operations, including budgetary management, human resources, visitor services, information technology, and security. She will also play a central role in the museum’s financial planning, developing multiyear administrative strategies to ensure BAMPFA’s long-term institutional health and vitality. In addition, Nomura-Weingrow will be the project supervisor on a range of important institutional priorities for BAMPFA, including its reaccreditation with the American Alliance of Museums, new diversity initiatives, and the museum’s next strategic planning cycle, among other projects. Nomura-Weingrow’s appointment completes the staffing of BAMPFA’s senior leadership team under BAMPFA Director Julie Rodrigues Widholm, who has made five senior-level appointments since she began her tenure in August 2020.

“We’re thrilled to welcome Katelyn to the senior leadership team at BAMPFA, where I’m confident that she will continue her outstanding track record of success as an administrator in a position that interfaces with nearly every aspect of the museum’s daily activities,” said Widholm. “Katelyn impressed us throughout the hiring process with her clear understanding of the administrative complexities that go into running a university-affiliated museum, and her deep experience at both Cal and in the arts field more broadly make her well-equipped to thrive in this role. We’re particularly excited about Katelyn’s record of accomplishment in her past positions as a project manager of long-term strategic initiatives in such critically important areas as financial planning and staff development, and we know that she'll be more than capable of advancing these important priorities at BAMPFA.”

In her current role as UC Berkeley’s Interim Executive Director and Assistant Dean of Students for the Associated Students of the University of California (ASUC) Student Union, Nomura-Weingrow oversees the operations for a student services infrastructure that reaches more than thirty thousand undergraduates. Her portfolio encompasses three separate facilities, four self-operating businesses, eight campus leaseholders, and a wide array of student programs, as well as the management of thirty-five career staff and a $10 million annual operating budget. Nomura-Weingrow joined the Student Union leadership team in 2015 as Director of Marketing and Creative Programs, where she spearheaded a comprehensive annual marketing and communications campaign to promote the organization’s programming; in this role, she also oversaw multiple creative programs on the UC Berkeley campus including the Publications and Media Center, Creative Lab, and Berkeley Art Studio, the latter of which she managed full-time from 2011 to 2015.

Before joining UC Berkeley, Nomura-Weingrow managed the media and performance art department at MoMA for five years, running the daily operations and administrative planning for time-based art programming at one of the world’s preeminent art museums. During her tenure at MoMA, Nomura-Weingrow coordinated the acquisition of more than six hundred artworks to the museum’s collection, managing every aspect of these accessions from contract negotiations to cataloging to logistics. She also led the department’s fundraising activities, earning approximately $1 million annually in grants to support acquisitions and special projects—including the digitization of more than two thousand video artworks from MoMA’s collection.

Prior to her tenure at MoMA, Nomura-Weingrow was a senior administrator in the Impressionist and Modern Art Department at Sotheby’s, managing sales, appraisals, restorations, and legal agreements for the globally renowned auction house. During her time at Sotheby’s, Nomura-Weingrow helped to administer the historic transaction of the first artwork to be sold for nine figures at auction: Pablo Picasso’s Boy with a Pipe (1905), which sold for $105 million in 2004.

”What intrigued me about this position is that it requires equal parts administration and passion for the arts,” said Nomura-Weingrow, who starts at BAMPFA this month. “I’m looking forward to bringing my unique skill set to BAMPFA under Julie Rodrigues Widholm’s exciting vision for the museum.”