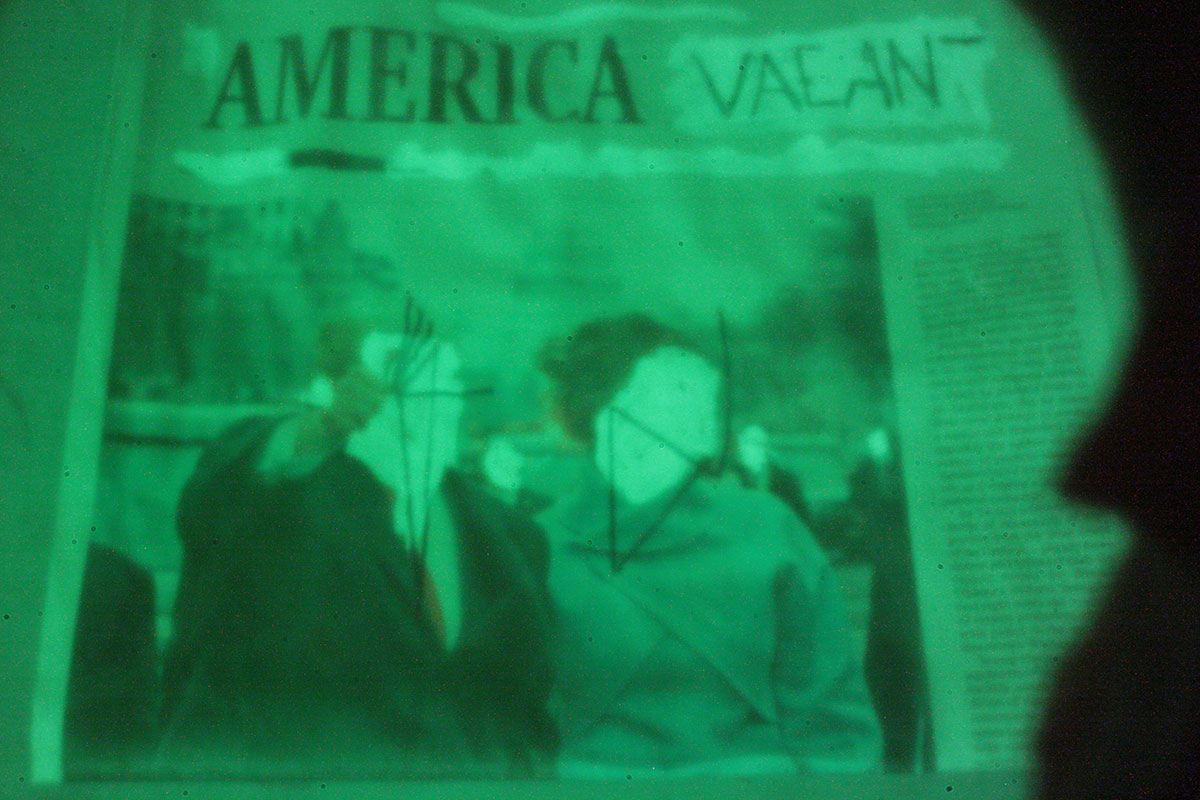 (Berkeley, CA) August 10, 2017—This fall, the UC Berkeley Art Museum and Pacific Film Archive (BAMPFA) unveils a major site-specific video commission from the groundbreaking contemporary artist JJ PEET. Comprising two separate presentations—one of which will appear on BAMPFA’s outdoor screen—JJ PEET: THE VACANT AMERICAN exemplifies PEET’s interest in the subjective nature of surveillance and modern media representation. The project marks the inaugural installment in On the Hour, a series that engages contemporary artists to create new work for BAMPFA’s monumental outdoor screen that is one of the signature design features of BAMPFA’s Diller Scofidio + Renfro-designed facility, which opened to the public last year.

THE VACANT AMERICAN features the experimental video REGULATED VIEWING, which draws on footage from PEET’s travels to explore the porous boundary between documentary and subjective photography. Like all of PEET’s work, REGULATED VIEWING engages directly with contemporary social and political undercurrents, while also inviting broader considerations about the nature of representation and surveillance. As PEET describes it, his work presents “leaks in reality” that are captured through his own distinctive approach to observational journalism.

REGULATED VIEWING screens at regular on-the-hour intervals on BAMPFA’s outdoor screen from September 13 through October 29. A companion presentation—FiLTER Animation, which interprets similar subject matter through PEET’s intricate hand-drawn animations—screens concurrently in BAMPFA’s 33-seat Theater Two during the same period. Both videos were conceived by PEET specifically for BAMPFA’s unique screening spaces, reflecting the institution’s role as one of the Bay Area’s premier venues for experimental film and video.

“By launching our On the Hour series with site-specific videos by an internationally acclaimed contemporary artist, BAMPFA is fulfilling the potential of our new facility to mount exciting multimedia artworks that expand our understanding of form and spectatorship,” said BAMPFA Director Lawrence Rinder. “Our partnership with JJ signals a renewal of BAMPFA’s longstanding commitment to supporting cutting-edge work through a robust contemporary commissioning program.”

“JJ PEET’s innovative approach to contemporary media makes him an ideal artist to inaugurate On the Hour, a series that leverages BAMPFA’s distinctive capacity to present large-scale experimental video projects” said Apsara DiQuinzio, curator of modern and contemporary art and Phyllis C. Wattis MATRIX curator at BAMPFA. “THE VACANT AMERICAN typifies JJ’s inquisitiveness about the aesthetic dimensions of contemporary social environments, inviting viewers to contemplate how artists amplify our understanding of the world around us.”

In conjunction with the opening of THE VACANT AMERICAN, BAMPFA hosts an artist’s talk with PEET on Monday, September 11 at 6:30 p.m. The program is free and includes an inaugural screening of REGULATED VIEWING. Future installments in the On the Hour series will be announced at a later date.

On the Hour / JJ PEET: THE VACANT AMERICAN is organized by Apsara DiQuinzio, curator of modern and contemporary art and Phyllis C. Wattis MATRIX Curator. The project is made possible with majorsupport fromVIA Art Fund.