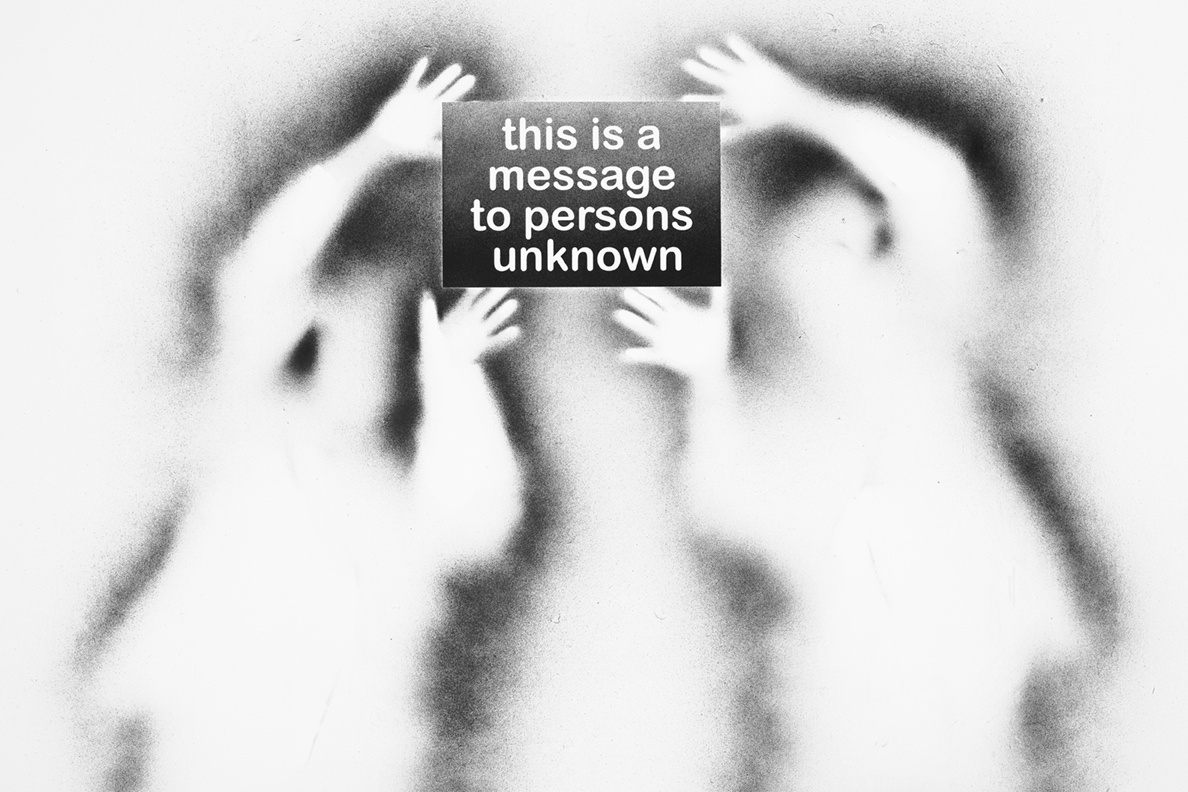 Born and raised in Mexico City, Amorales has exhibited widely in the United States and Europe, where his installation for the Mexican Pavilion at the 2017 Venice Biennale was met with great acclaim. Working with a wide range of media, the artist has spent the past three decades exploring themes of language and communication through his practice, in forms ranging from animation and video art to live performance and more. Amorales’s BAMPFA commission extends this theme by reimagining Berkeley protest posters from the 1960s, when the city emerged as a nexus of left-wing political and social movements. These slogans and signifiers are depicted in the mural alongside more recent protest language from Berkeley demonstrations over the past decade, as well as lyrics of British Anarcho-punk bands from 1980s who opposed Thatcher-era neoliberal policies.

For Ghost Demonstration, Amorales has spray-painted dozens of stencils of these posters and lyrics onto large boards that are mounted onto BAMPFA’s Art Wall, creating a composite grid of protest that spans the two-story entry space. The work also depicts stenciled human figures, alluding to the activists past and present who exercise their free speech rights. The work’s visual aesthetic further draws from Mexico’s vibrant history of murals and avant-garde art movements from the first half of the twentieth century, suggesting continuity between the emerging political art of that earlier era with the political protest actions of the recent past.

Inspired by Berkeley’s vivid history of activism, Amorales has selected more than a dozen phrases collected from archival images of demonstrations, photos of posters, and recent imagery culled from the Internet. The language that appears in Ghost Demonstration is deeply rooted in specific historical moments, even as the text often transcends its origins to resonate across disparate eras. This process of reassembling the language of past histories into new forms of communication is characteristic of Amorales’s practice, which explores the potential for art to reshape historical modes of transmission.

“With Ghost Demonstration, we see Carlos Amorales integrating his interest in counterculture movements with the history of avant-garde developments in Mexico that were motivated by more populist interests of a new political regime seeking to reconnect with its people,” said Apsara DiQuinzio, BAMPFA’s curator of modern and contemporary art and Phyllis C. Wattis MATRIX Curator. “The ghostly outlines of the human figure point to historically significant moments in time and in diverse cultures, while, in combination with the slogans, reinforcing the urgent need for remaining socially and politically engaged in the present.”

Ghost Demonstration marks the sixth installment in BAMPFA’s Art Wall series, which began with the inauguration of its new Diller Scofidio + Renfro-designed building in early 2016. Amorales’s Art Wall commission follows that of Barbara Stauffacher Solomon, the Bay Area artist and graphic designer whose work was on view at BAMPFA from August 2018 through March 2019.

On Wednesday, March 27 at 6 p.m., Amorales appears at BAMPFA in conversation with DiQuinzio to discuss his artistic practice and the historical legacy of Mexican muralism and political protest art. The conversation is free with museum admission.

Carlos Amorales studied in Amsterdam at the Gerrit Rietveld Academie (1996–97) and Rijksakademie van beeldende kunsten (1992–95). He has participated in artistic residencies at the Atelier Calder in Saché (2012) and MAC/VAL, Vitry-sur-Seine in France (2011), and as part of the Smithsonian Artist Research Fellowship program in Washington, D.C. (2010).

Carlos Amorales represented Mexico at the fifty-seventh Venice Biennial with the project Life in the Folds (2017). His work has been part of other biennials such as the tenth Shanghai Biennale, China (2015); 2 and 8 Berlin Biennial (2001 and 2014); Sharjah Biennal 11, United Arab Emirates (2013); the tenth and twelfth Bienal de la Habana, Havana, Cuba (2015 and 2009); fifth SeMA Biennale Mediacity Seoul, South Korea (2008); and second Moscow International Biennale of Contemporary Art (2007).

Art Wall: Carlos Amorales is organized by Apsara DiQuinzio, BAMPFA’s curator of modern and contemporary art and Phyllis C. Wattis MATRIX Curator. The Art Wall is commissioned by BAMPFA and made possible with major funding from Frances Hellman and Warren Breslau.