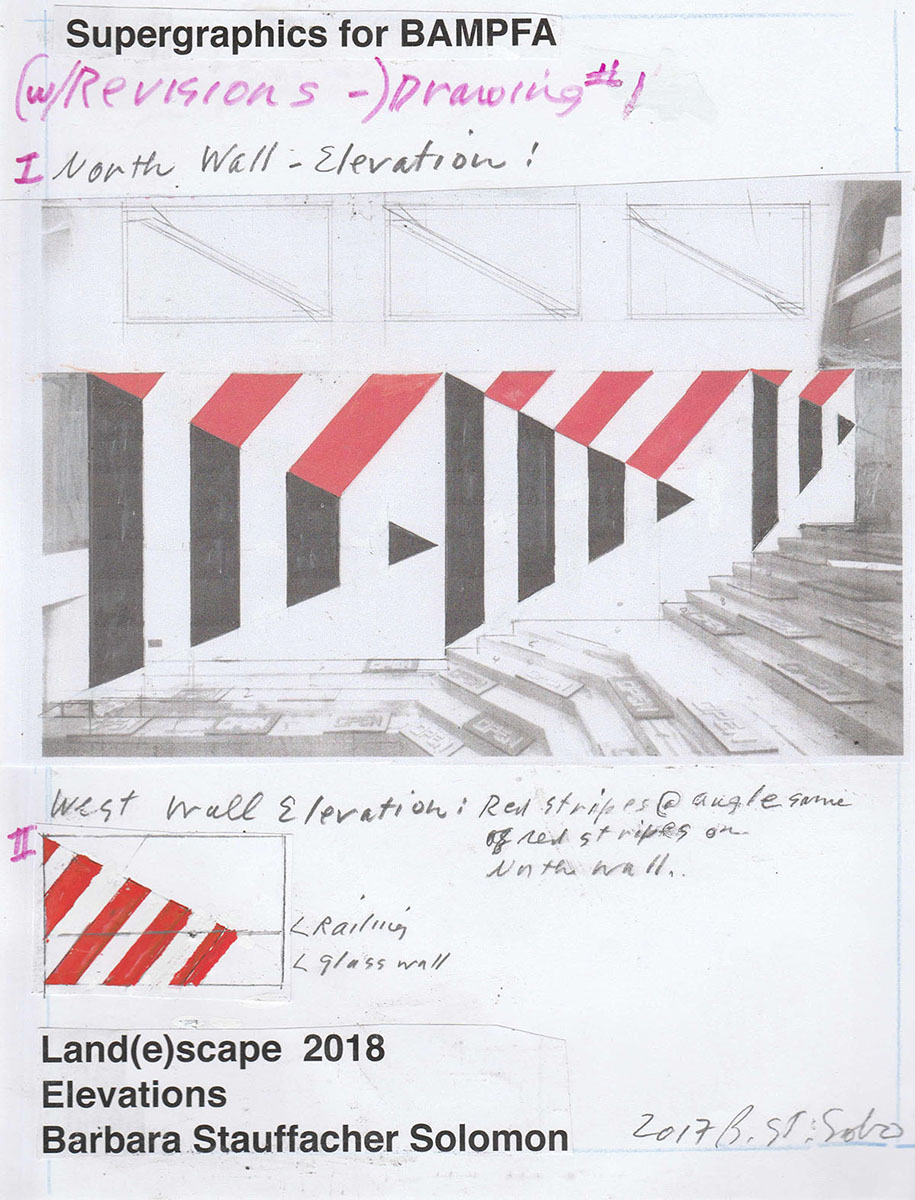 A Bay Area native who has been active in the region’s creative community for more than sixty years, Solomon is credited with launching the Supergraphics movement of the 1960s, which blends elements of Swiss Modernism and American Pop with a distinctly West Coast sensibility. Her installation at BAMPFA revives this singular aesthetic with an arresting geometric pattern rendered in red, black, and white. Exemplifying Solomon’s immersive approach to graphic design, the work extends across the entirety of the 63-by-30-foot Art Wall and continues to wrap around the entrance to a nearby gallery.

Land(e)scape 2018 marks the fifth installment in BAMPFA’s Art Wall series, which began with the inauguration of its new Diller Scofidio + Renfro-designed building in early 2016. The new project reaffirms the 90-year-old artist’s continuing role as a creative force in the Bay Area, where her work can be found on permanent display at SFMOMA and in colorful interiors at Sea Ranch in Sonoma County. Solomon’s Art Wall commission follows that of Karabo Poppy Moletsane, the South African artist whose work was on view at BAMPFA from November 2017 through July 2018.

On Thursday, August 16 at noon, Solomon is joined in conversation at BAMPFA by Director Emeritus Jacquelynn Baas to discuss her six-decade career and the legacy of Supergraphics. Families are invited to engage with Solomon’s work at a Gallery + Studio workshop on October 13 at 11:30 a.m., where children ages 6–12 can collaborate on their own Supergraphic designs. Additional public programs will be announced at a later date on bampfa.org.

“It’s a delight to animate BAMPFA’s interior with a sweeping new work by an artist who has put her indelible stamp on the history of West Coast graphic design for more than half a century and shows no signs of slowing down,” said Baas, who curated Solomon’s Art Wall presentation. “Barbara Stauffacher Solomon’s work has been exhibited around the world, but it’s especially meaningful to present her latest project here in the Bay Area, where she was born and educated and where her Supergraphics revolution first took off.”

Barbara Stauffacher Solomon is a San Francisco-based artist, graphic and landscape designer, and writer. Born in 1928, Solomon first worked as a dancer before studying painting and sculpture at the San Francisco Art Institute. After the death of her husband, the experimental filmmaker Frank Stauffacher, in 1956, Solomon moved to Basel, Switzerland to study graphic design at the Basel Art Institute with Armin Hoffman. She later studied Architecture at the University of California, Berkeley.

Best known for her interior Supergraphics of the 1960s Sea Ranch and her 1991 Ribbon of Light installation at the Embarcadero Promenade in San Francisco, Solomon developed an iconic style that mixed Swiss Modernism and West Coast Pop, pioneering the look of California Cool—an important moment in graphic design history. Her work has been exhibited in galleries around the world from Paris to New York, and is currently on permanent exhibition at SFMOMA.

Art Wall: Barbara Stauffacher Solomon is organized by BAMPFA Director Emeritus Jacquelynn Baas. The Art Wall is commissioned by BAMPFA and made possible with major funding from Frances Hellman and Warren Breslau. Additional support is provided by Hotel Shattuck Plaza.