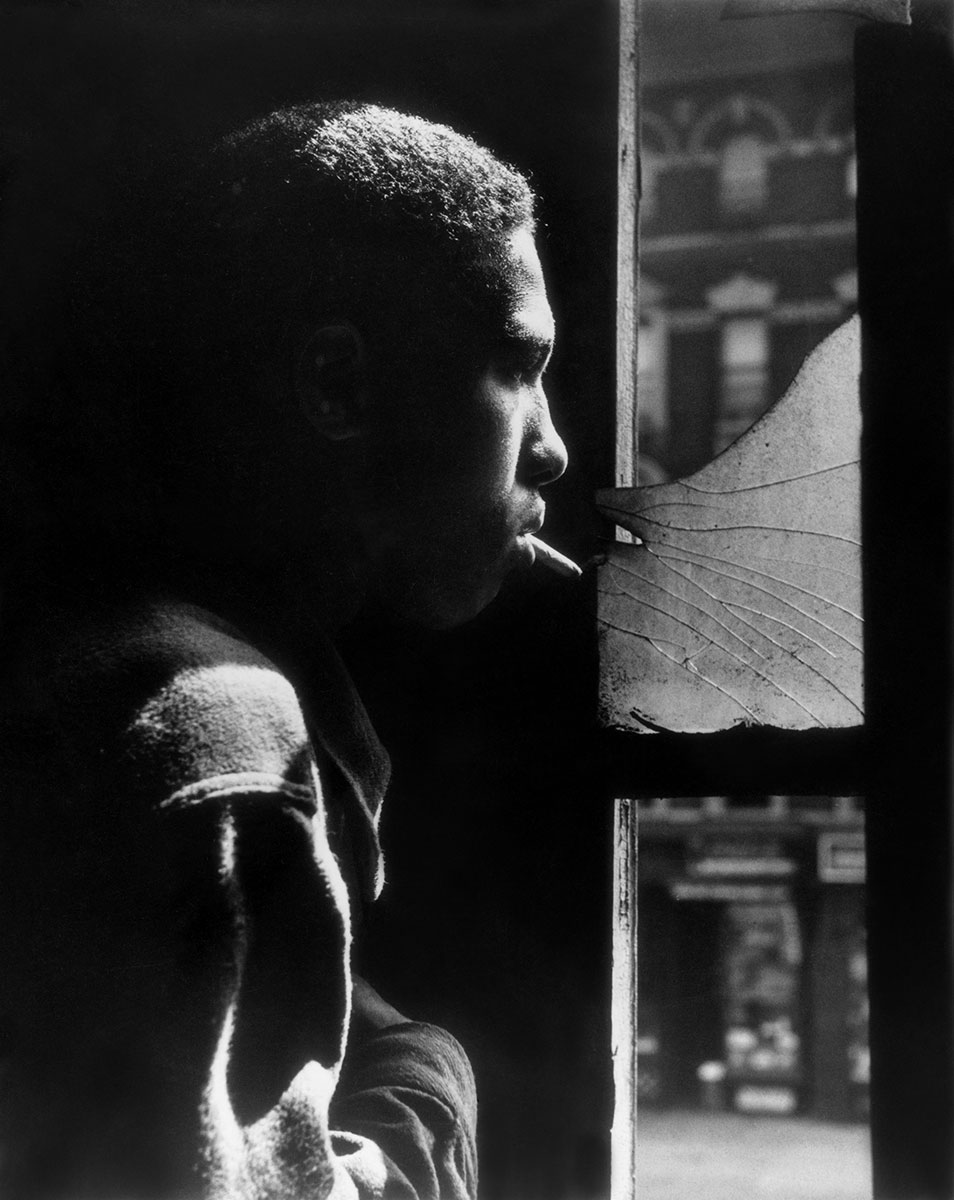 (Berkeley, CA) August 17, 2017—This fall, the UC Berkeley Art Museum and Pacific Film Archive (BAMPFA) presents a major exhibition of work by the photographer, artist, and filmmaker Gordon Parks, whose indelible images chronicled the twentieth-century African American experience. Gordon Parks: The Making of an Argument is the first exhibition to explore the production of Parks’s breakthrough work: “Harlem Gang Leader,” his first photo-essay for Life magazine, which documented life among the street gangs of 1940s Harlem. Featuring more than eighty objects from the Gordon Parks Foundation—including previously unseen photos that were redacted by the magazine’s editors—the exhibition illuminates the untold history behind the series that launched Parks’s career, revealing formerly submerged tensions between photographer, editor, subject, and truth.

Parks began his work in Harlem by establishing a relationship with Leonard “Red” Jackson, a seventeen-year-old gang leader who is the primary subject of the photo-essay. Through his friendship with Jackson, Parks was able to photograph daily life in postwar Harlem, where he observed the struggles of black inner-city youth contrasting with scenes of communal and domestic resilience. Images in the series range from street brawls between rival gangs to moments of unexpected tenderness between Jackson and his family, providing a thoughtful and nuanced portrayal of African American urban life.

The project yielded hundreds of photos that Parks submitted to his editors at Life, who ultimately selected twenty-one images for publication. When it was published in 1948, the series was celebrated as one of the most emotionally textured depictions of the African American experience to date, and it remains an iconic work of photojournalism to this day. However, a deeper look at the selection process—represented in the exhibition through contact sheets, archival issues, and dozens of unpublished photos—reveals unacknowledged tensions between Parks’s artistic vision and an editorial process that did not fully align with his intentions. By contrasting the photographer’s initial ambitions with the series that eventually reached newsstands, the exhibition raises profound questions about the intersection of artistic representation, mass media, and curatorial intent.

BAMPFA is the exclusive West Coast venue for Gordon Parks: The Making of an Argument, which originated at the New Orleans Museum of Art (NOMA). The BAMPFA presentation features screenings of multiple films directed by Parks, including three early documentary films, Flavio (1964), Diary of a Harlem Family (1968), and Moments Without Proper Names (1986); The Learning Tree (1969), the first major Hollywood studio film directed by an African American; Solomon Northup’s Odyssey (1984), an early adaptation of the memoir 12 Years A Slave; and Shaft (1971), which is widely credited with launching the “blaxploitation” genre. The exhibition also coincides with another presentation of Parks’s work, Gordon Parks: Legacy, which opens at San Francisco’s Jenkins Johnson Gallery on October 26, 2017.

“We are thrilled to mount an exhibition that offers visitors a new perspective on one of the most artistically ambitious works of photojournalism to emerge from the mid-twentieth century,” said BAMPFA Director and Chief Curator Lawrence Rinder. “BAMPFA’s presentation of Gordon Parks: The Making of an Argument is a timely reminder of the ways in which mass media can be manipulated and profoundly impact our understanding of social and political issues.”

“Given how profoundly Parks’s photographs advanced the discourse around African American representation in mass culture, it is remarkable to contrast his ‘Harlem Gang Leader’ series as published with what we can discern from the more complete series that he initially submitted to Life,” said BAMPFA Assistant Curator Stephanie Cannizzo, who curated the exhibition’s BAMPFA presentation. “The extraordinary archival holdings of the Gordon Parks Foundation have allowed us to provide visitors with a new way to engage with a series of images that have resonated in the public consciousness for decades.”

In conjunction with Gordon Parks: The Making of an Argument, BAMPFA hosts a curator’s talk on Thursday, September 28 at 12 p.m. with Russell Lord, who curated the exhibition’s presentation at NOMA. Other programs include a panel discussion on Saturday, September 30 at 1 p.m. with Makeda Best, curator of photography at the Harvard Art Museums; Tina Sacks, assistant professor at UC Berkeley’s School of Social Welfare; and Orlando Bagwell, renowned social justice filmmaker and director of the documentary program at UC Berkeley’s Graduate School of Journalism. Both presentations are free with BAMPFA admission. Dates for the film programs will be announced in September.