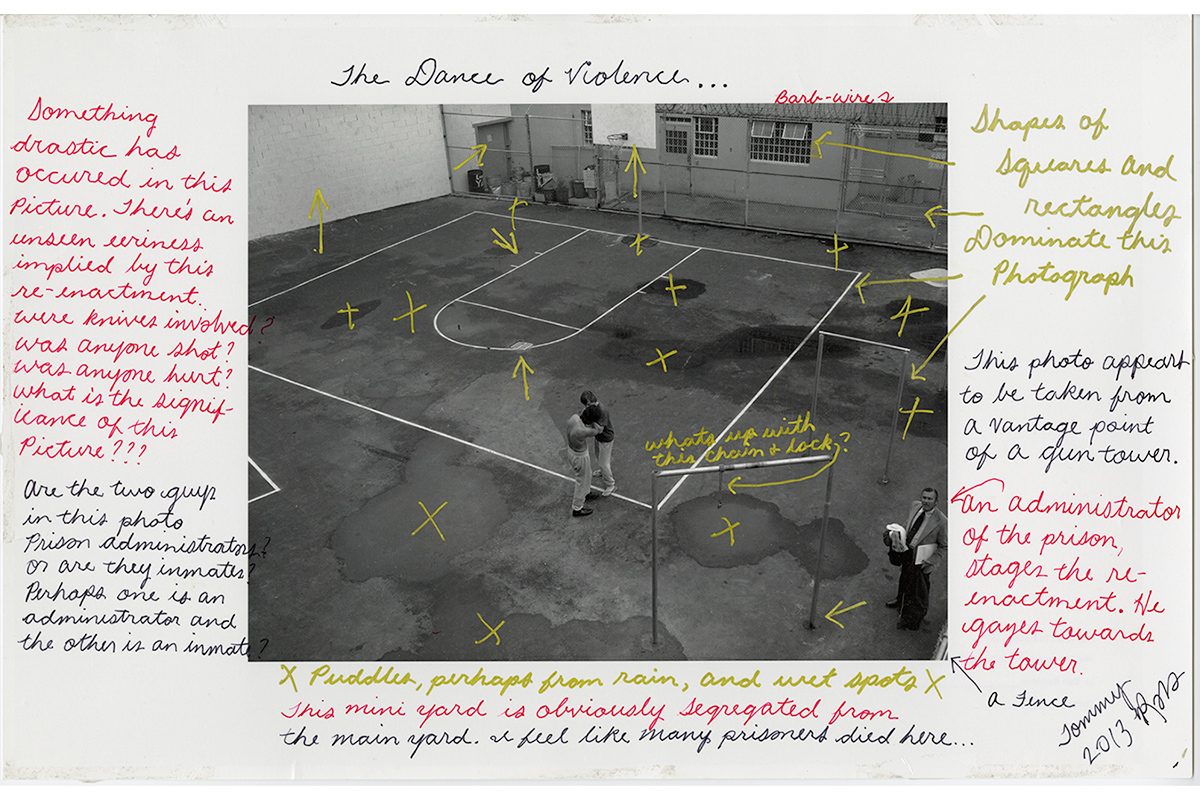 (Berkeley, CA) July 11, 2019—A new exhibition at the Berkeley Art Museum and Pacific Film Archive (BAMPFA) showcases a unique collaboration between the contemporary artist Nigel Poor and the inmates of San Quentin State Prison. The San Quentin Project: Nigel Poor and the Men of San Quentin State Prison uses photography to capture rarely seen glimpses of daily life behind the walls of the prison, a minimum-maximum facility in the Bay Area that currently houses more than four thousand men. The exhibition features visual documents made during Poor’s collaboration with the inmate population, presented alongside rare photographs from the prison’s own archives.

The San Quentin Project centers on an eponymous series of nearly thirty works created by prison inmates working in collaboration with Poor, an artist and photographer who has taught classes on visual literacy and photography at San Quentin since 2011. Poor invited her students to complete “mapping exercises,” annotating photographs with handwritten responses that analyze the images and explore their meaning. Though these exercises began with conventional art photography, Poor eventually incorporated pictures from the prison’s historical archive, offering her incarcerated students a chance to respond to, refute, and translate these visual records of San Quentin’s history. The results of their work are on display in this exhibition, along with more than 80 photographs from an uncataloged archive of negatives made inside the prison from the 1930s to the 1980s.

Complementing the visual documentation of San Quentin, the exhibition includes audio stations where visitors can listen to Ear Hustle, a podcast co-created by Poor and Earlonne Woods, a former prisoner at San Quentin whose sentence was commuted by Governor Jerry Brown last year. Ear Hustle documents daily life inside the prison, including extended interviews with many current inmates. Since launching in 2017, Ear Hustle has received massive critical and popular acclaim, including more than 20 million downloads worldwide. Select episodes will be available for listening in an adjacent space, providing greater understanding of the inmates’ experiences of life behind bars.

After premiering at the Milwaukee Art Museum earlier this year, The San Quentin Project receives its sole West Coast presentation at BAMPFA, inviting Bay Area audiences to reflect on the role of the carceral system in their own community. The museum will host multiple public programs that highlight the role of San Quentin in the Bay Area’s own history, including a colloquium on Saturday, October 19 at 1:30 p.m. that brings together leading UC Berkeley faculty from the fields of law, social welfare, and literature, along with Poor herself. Based in San Francisco, Poor returns to BAMPFA on Monday, October 28 at 6:30 p.m. to co-deliver a lecture with Michael Nelson, a former San Quentin State Prison resident whose essay about photography is included in the exhibition. Other programs include a curator’s talk on Thursday, August 22 at 12 p.m. with Lisa Sutcliffe, the Herzfeld Curator of Photography and Media Arts at the Milwaukee Art Museum.

“The San Quentin Project offers a unique opportunity to consider the role of art in sparking conversations that question assumptions and open dialogue,” said Sutcliffe, who organized the exhibition’s presentation in Milwaukee. “This exhibition seeks to not only invite audiences to discover how images of incarcerated populations have been codified, but also promote more critical skills in reading the cultural signs and power structures inherent within visual images.”

“We’re pleased to introduce Bay Area audiences to an exhibition that illuminates the complicated history and current conditions of San Quentin State Prison, a place that is widely known throughout our region without being deeply understood by those outside its walls,” said BAMPFA’s Senior Curator for Asian Art Julia White, who co-organized the exhibition’s Berkeley presentation with Associate Curator Stephanie Cannizzo. “It’s especially meaningful to us to share the perspective of the prison’s own inhabitants—many of whom come from Bay Area communities—whose voices have been powerfully foregrounded through this remarkable collaboration with Nigel.”

Nigel Poor lives and works in the Bay Area. Her work has been shown at many institutions including, The San Jose Museum of Art, Institute of Contemporary Art, San Jose, Friends of Photography, SF Camerawork, San Francisco Museum of Modern Art, the San Diego Museum of Contemporary Art, Museum of Photographic Arts, San Diego, Corcoran Gallery of Art, Washington, D.C. and the Haines Gallery in San Francisco. Her work can be found in many collections including the SFMOMA, the M.H. de Young Museum, San Diego Museum of Contemporary Art and Corcoran Gallery of Art, Washington D.C. She received her BA from Bennington College and her MFA from Massachusetts College of Art.

For many years her work has explored the various ways people make a mark and leave behind evidence of their existence. She is interested in forms of portraiture and explores this vastly mined photographic area through unconventional mean; using fingerprints and hands, objects people have thrown out, human hair, dirt, dryer lint and dead insects as indexical markers of human presence and experience. Her work explores the troubling question of how to document life and what is worthy of preservation.

Nigel Poor is a Professor of Photography at California State University, Sacramento, and a member of the Bay Area photo collective Library Candy.

The San Quentin Project: Nigel Poor and the Men of San Quentin State Prison is organized by the Milwaukee Art Museum. The exhibition is curated by Lisa J. Sutcliffe, Herzfeld Curator of Photography and Media Arts at the Milwaukee Art Museum. The BAMPFA presentation is organized by Senior Curator for Asian Art Julia M. White and Associate Curator Stephanie Cannizzo. BAMPFA’s presentation is made possible with generous support from the Present Progressive Fund, Frish Brandt and August Fischer, and Kaitlyn and Mike Krieger.