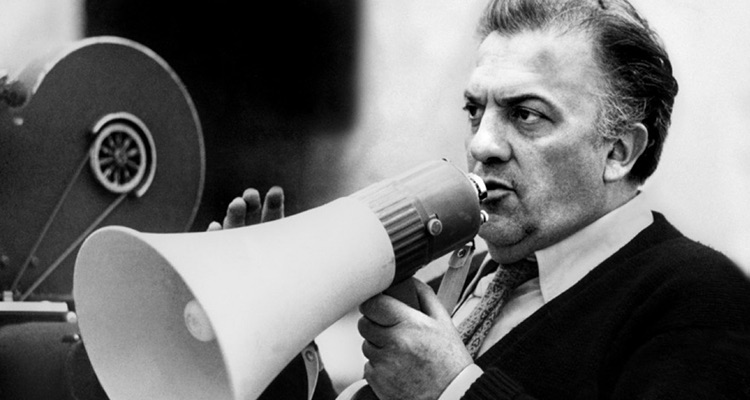 (Berkeley, CA) December 17, 2019—The UC Berkeley Art Museum and Pacific Film Archive (BAMPFA), in association with Luce Cinecittà, Rome, will mount a major retrospective of films by Federico Fellini, the Italian director widely regarded as one of the twentieth century’s greatest filmmakers. Federico Fellini at 100 comprises more than forty programs, offering a comprehensive retrospective of Fellini’s films—the largest of its kind ever mounted in the Bay Area. The series will premiere in Berkeley as the first North American installment of a worldwide centennial tour, which kick-starts in London at BFI Southbank in January and is coordinated by the Italian agency for the promotion of Italian cinema worldwide, Luce Cinecittà.

BAMPFA’s five-month retrospective features many new digital restorations of Fellini’s films that have been prepared by Luce Cinecittà in partnership with Cineteca di Bologna and Cineteca Nazionale. The program includes a series of guest lectures by the distinguished film historians Russell Merritt and David Thomson as part of BAMPFA’s ongoing In Focus program. BAMPFA is also partnering with Cinema Italia San Francisco to present a daylong marathon of Fellini films at San Francisco’s Castro Theatre on Saturday, March 7.

A central figure in the international art cinema movement of the postwar era, Federico Fellini (1920–1993) became one of the most celebrated European directors of his generation, garnering global acclaim for masterworks like La strada, Amarcord, and 8½. Though he began his career in the Italian Neorealist movement as a protégé of Roberto Rossellini, Fellini soon transitioned from Neorealism to his own distinctive style, employing dreamlike imagery and fantastical scenarios to explore themes of memory, desire, and artistic expression. In a career that spanned nearly five decades, Fellini was lauded with countless international awards, including a Palme d’Or at Cannes for La dolce vita, four Academy Awards for Best Foreign Language Film—the most ever awarded to a single director in that category—and an Academy Honorary Award, which he received in 1993 for his many contributions to cinema across his career.

Federico Fellini at 100 includes every film Fellini ever directed, from his Neorealist-inflected solo directorial debut Variety Lights to midcareer masterpieces like the Oscar-winning 8½ to phantasmagorical late works like Fellini Roma. The series encompasses rarely seen documentary and short films by Fellini, as well as three of his early collaborations with Rossellini—a canonical director in his own right who directed Fellini’s screenplays for Open City, Paisan, and The Flowers of St. Francis. In addition to hosting the screening program, BAMPFA will celebrate Fellini’s legacy with a Felliniesque gala at The Hibernia in San Francisco on Tuesday, March 10.

“It’s an honor for BAMPFA to host the North American launch of the Federico Fellini touring retrospective coordinated by Luce Cinecittà. It has been twenty-five years since that last major presentation of Fellini’s films in the Bay Area, so this series represents a very important chance to see Fellini’s films in full context,” said Susan Oxtoby, senior film curator at BAMPFA. “Fellini’s cinema is at once imaginative, fantastical, humorous, and self-reflective—a body of work that has been influential on many filmmakers and beloved by generations of filmgoers around the world. We are delighted to collaborate with our colleagues at Luce Cinecittà, with whom we’ve presented tributes to great Italian masters in the past. After years of research and careful restoration by the most respected Italian film archives, including Cineteca di Bologna and Cineteca Nazionale, the Fellini 100 tour offers audiences a unique experience. Here in the Bay Area, we are pleased to partner with Cinema Italia, who will celebrate Fellini on March 7 at the Castro Theatre. And, in grand style, this year we will connect BAMPFA’s gala fundraiser with its festive Felliniesque theme to our programmatic activities presented in association with the Istituto Italiano di Cultura, and the Consulate General of Italy in San Francisco.”

All films are directed by Federico Fellini unless otherwise noted.

The Flowers of St. Francis (1949) – directed by Roberto Rossellini

Federico Fellini at 100 is copresented with Luce Cinecittà and is the first US installment in the Federico Fellini 100 tour, a series of centennial tributes that will travel to museums and film institutions worldwide, led by Luce Cinecittà. Unless otherwise noted, all films have been digitally restored by Luce Cinecittà, Cineteca di Bologna, and Cineteca Nazionale. BAMPFA’s series is presented in association with the Italian Cultural Institute (IIC) of San Francisco, under the auspices of the Consulate General of Italy. The series is organized by BAMPFA Senior Film Curator Susan Oxtoby and Camilla Cormanni and Paola Ruggiero, Luce Cinecittà. Thanks also to Annamaria Di Giorgio, IIC San Francisco; Amelia Antonucci, Cinema Italia, San Francisco; Emily Woodburne, Brian Belovarac, and Ben Crossley-Marra, Janus Films; and Eric Di Bernardo, Rialto Pictures.

Advance tickets can be purchased via www.cinemaitaliasf.com.

* Not to be confused with the BAMPFA gala

Istituto Luce Cinecittà
Established in May 2010, following the merger of Cinecittà Holding and Istituto Luce (founded in 1924), Istituto Luce Cinecittà is the public service branch of the Italian Ministry of Cultural Heritage and Activities and Tourism with the aim of promoting classic and contemporary Italian cinema worldwide, through traveling programs in major international institutions. Such programs include: film retrospectives of Italy’s most prominent directors and actors, art and photographic exhibitions, books, presentations, support in the selection of Italian films at film festivals, and the participation of Italian talents attending international events. It is also home of Cinecittà Studios. www.Cinecitta.com

The Italian Cultural Institute of San Francisco
The Italian Cultural Institute promotes Italian language, culture, and the best of Italy by offering information about Italy, scholarships, and cultural events, such as: art exhibits, film screenings, concerts, and lectures. The Institute’s goal is to foster mutual understanding and cultural cooperation between Italy and the United States. www.iicsanfrancisco.esteri.it