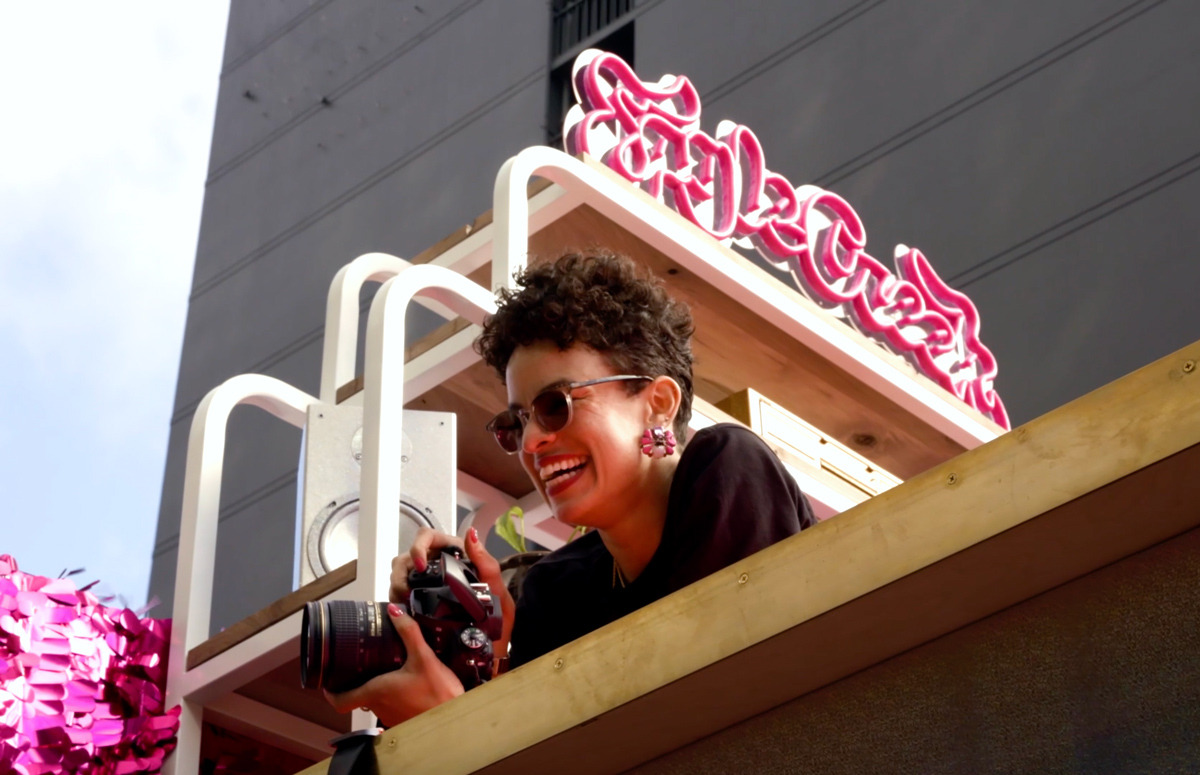 Opens May 7 in BAMPFA’s Virtual Cinema

(Berkeley, CA) April 20, 2021—Next month, the UC Berkeley Art Museum and Pacific Film Archive (BAMPFA) will launch an exclusive first-run presentation of Tell Them We Were Here, a new documentary that celebrates the iconoclastic art scene of the San Francisco Bay Area. Opening as a virtual presentation on BAMPFA’s website, the film comprises a series of studio visits and intimate conversations with some of the Bay Area’s best-known artists, curators, gallerists, and other creative practitioners. Tell Them We Were Here marks the feature film debut of the distinguished painter, publisher, and gallerist Griff Williams, founder of San Francisco’s Gallery 16, who codirected the film with his son Keelan Williams.

An impressionistic snapshot of the past twenty-five years of Bay Area art making, Tell Them We Were Here centers on eight artists who each epitomize the community-driven spirit that defines the region’s art scene. Considering Amy Franceschini’s merging of design, research, public art, and gardening; Tucker Nichols’s mail art; Jim Goldberg’s photographs of the poor and the rich; Lynn Hershman Leeson’s prescient works on identity, surveillance, and artificial intelligence; Nigel Poor’s collaboration with the incarcerated men of San Quentin State Prison; Michael Swaine’s Mending Library; Alicia McCarthy’s mural in the Tenderloin; and Sadie Barnette’s transformation of the FBI file on her activist father into a glittering celebration of resistance and survival, the film shows how these artists have engaged with the legacies of Bay Area activism and social consciousness throughout their eclectic bodies of work. Each of the eight artists featured in Tell Them We Were Here have been exhibited at BAMPFA or are represented in the museum’s collection.

“BAMPFA is honored to launch this exceptional documentary, which offers a unique perspective on one of the world’s most vibrant and distinctive arts communities—one we’re proud to be a part of and help to nurture with our own programming,” said BAMPFA’s Associate Film Curator Kate MacKay. “Tell Them We Were Here is a timely reflection on the role of the Bay Area’s historical countercultural movements, as well as the region’s contemporary social and economic challenges, in fostering an art scene less concerned with money and power than with imagination, innovation, community, and care.”

In conjunction with the film’s online presentation, BAMPFA will host a free livestream conversation and Q&A with Griff and Keelan Williams alongside one of the film’s featured artists, Nigel Poor, whose work with the inmates of San Quentin State Prison was the subject of an acclaimed exhibition at BAMPFA in 2019. The conversation will be moderated by BAMPFA Director Julie Rodrigues Widholm and will be streamed live on Tuesday, May 11 at 6 PM PDT.

Tell Them We Were Here will be accessible online via BAMPFA’s virtual cinema program beginning May 7. The rental fee is $12 for the general public and $8 for BAMPFA members. Viewers can preorder the film and watch the trailer at bampfa.org/event/tell-them-we-were-here. For more information about the film, visit tellthemwewerehere.com.

Griﬀ Williams is an American painter, publisher, and gallerist. In 1993 he founded Gallery 16 and the pioneering fine art printmaking workshop Urban Digital Color in San Francisco. The exhibition and publishing program has worked with hundreds of artists, including Lynn Hershman Leeson, William Kentridge, Deborah Oropallo, bell hooks, Rex Ray, Margaret Kilgallen, Mark Grotjahn, and Paul Sietsema. Williams has also designed and published dozens of acclaimed books with the Gallery 16 Editions imprint, including The Gay Seventies: Hal Fischer and a monograph on the life and artwork of the late San Francisco artist Rex Ray. Williams’s paintings have been exhibited in galleries and museums like the San Diego Museum of Art, Crocker Art Museum in Sacramento, and San Jose Museum of Art.

Filmmaker Keelan Williams was born and raised in the Bay Area and is now based in Los Angeles. He graduated from Loyola Marymount’s School of Film and Television Production. Williams has directed, produced, shot, and edited short films, documentaries, concert films, and music videos. His first short film, Everything Old Is New Again, was an Oﬃcial Selection at The Big Sky Documentary Film Festival and was nominated for Best Documentary at Film Outside the Frame. Tell Them We Were Here is his first feature-length documentary.

An internationally recognized arts institution with deep roots in the Bay Area, the University of California, Berkeley Art Museum and Pacific Film Archive (BAMPFA) is a forum for cultural experiences that transform individuals and advance the local, national, and global discourse on art and film. BAMPFA is UC Berkeley’s premier visual arts venue, presenting more than 450 film screenings, scores of public programs, and more than 20 exhibitions annually. With its vibrant and eclectic programming, BAMPFA inspires the imagination and ignites critical dialogue through art, film, and other forms of creative expression.