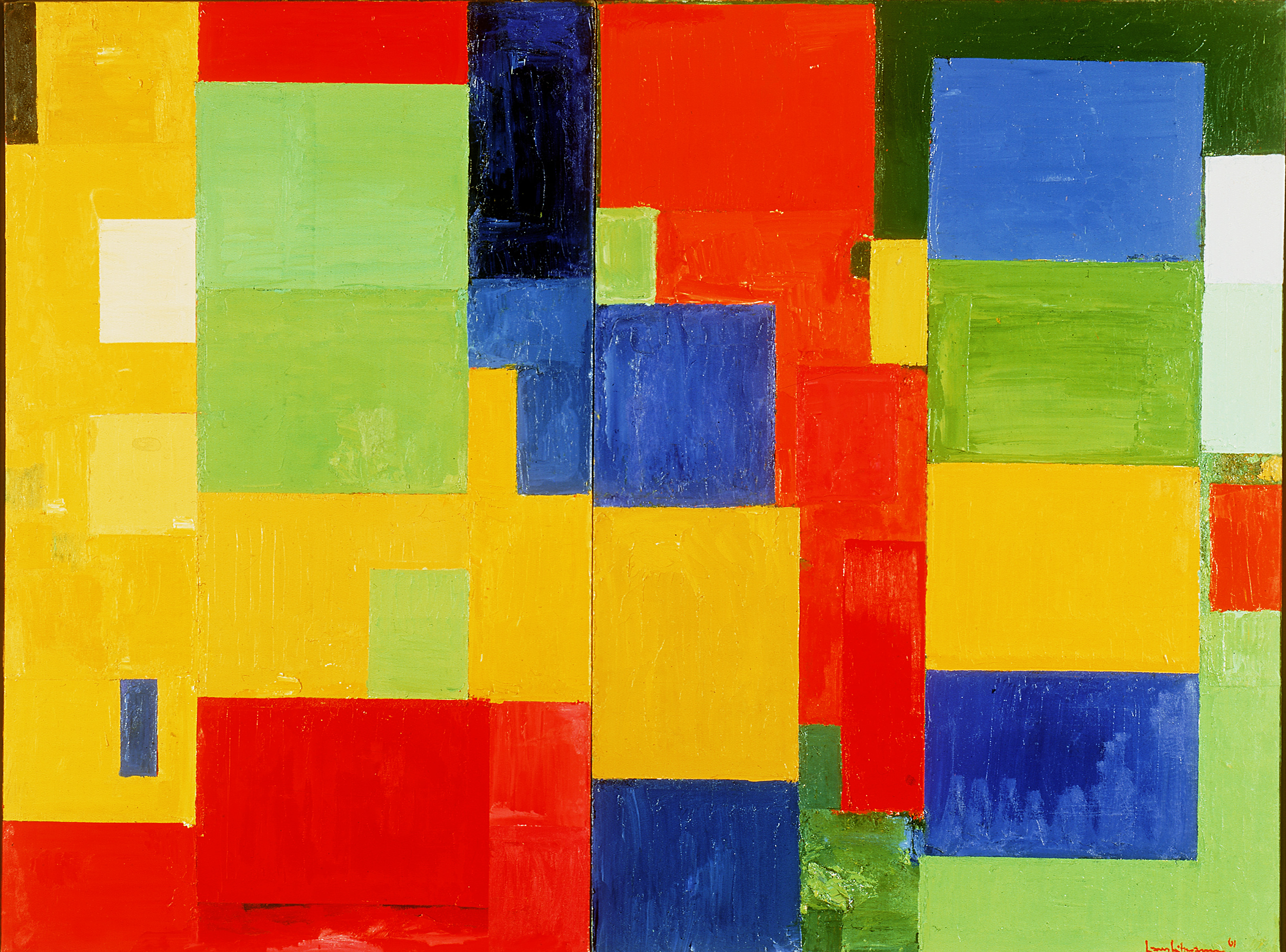 (Berkeley, CA) October 3, 2018—A monumental Hans Hofmann exhibition opens at the University of California, Berkeley Art Museum and Pacific Film Archive (BAMPFA) next year, marking a comprehensive reevaluation of one of the twentieth century’s most influential abstract painters. With nearly seventy paintings—including works from private collections that have never been exhibited in a museum setting—Hans Hofmann: The Nature of Abstraction presents an unprecedented and fresh look at Hofmann’s studio practice, focusing in particular on his continuously experimental approach to painting and the expressive potential of color, form, and space. On view at BAMPFA from February 27 through July 21, the exhibition will then travel to the Peabody Essex Museum in Salem, MA September 21, 2019 through January 6, 2020.

Accompanied by a fully illustrated scholarly catalog on Hofmann’s career, the exhibition marks the most significant opportunity to reexamine the artist’s legacy since his death in 1966. Since that time, discourse around Hofmann has focused primarily on the remarkable color plane abstractions he created the 1950s and ’60s, which were the focus of major exhibitions at New York’s Museum of Modern Art and the Whitney Museum of American Art during his lifetime. Hans Hofmann: The Nature of Abstraction offers an even broader perspective on Hofmann’s body of work, reconnecting many of the artist’s most iconic late-career paintings from the MoMA and Whitney exhibitions with dozens of remarkably robust, prescient, and understudied works from the 1930s and ’40s to chart the trajectory of his singular style. This comprehensive view of Hofmann’s oeuvre advances a growing public and scholarly reassessment of the artist ignited by the rich revelations of the catalogue raisonné of his paintings, which was published in 2014.

Curated by BAMPFA’s Curator Emerita Lucinda Barnes, the chronological exhibition opens with works created by Hofmann during his formative years in the 1930s and ’40s, after he emigrated from his native Germany to the United States, where he taught at UC Berkeley, then the Art Students League of New York, before establishing his famously influential schools in New York City and Provincetown, Massachusetts. Many of Hofmann’s pupils went on to become nationally distinguished artists in their own rights, including Helen Frankenthaler, Lee Krasner,

Red Grooms, Wolfgang Paalen, Allen Kaprow, Ken Jacobs, Ray Eames, Lillian Kiesler, Robert De Niro, Sr., Mercedes Matter, Glenn Wessels, Worth Ryder, Wolf Kahn, and Virginia Admiral, among many others. During this period, Hofmann’s paintings were focused on his immediate environment, such as studio interiors and landscapes in and around Provincetown. He prolifically painted related scenes, but applied varied stylistic approaches—Cubist, Fauvist, Expressionist—constantly sharpening his technical skills while challenging boundaries between representation and artistic vision. Hofmann’s early studio interiors and landscapes quickly evolved from colorful compositional explorations of pictorial space toward artistic expressions of mood and states of mind reflecting forces and counterforces in nature, his enduring source of inspiration.

Hofmann’s paintings of the 1940s were among his most experimental. In the early years of the decade Hofmann used spontaneous and calligraphic methods of Surrealism as a transformative means of freeing color and form, and ultimately individual expression. Gradually, his forms became more organic and abstract, set within indeterminate spatial zones. By the mid-1950s, vibrant rectangular color planes dominated his compositions. Each element, form, and gesture operated in a dynamic flux of positive and negative visual energies, a rhythmic balance of vertical and horizontal, expansion and contraction, “push and pull.” Hofmann exhibited regularly during this period as he produced new works, from his first solo exhibition in New York in 1944 at Peggy Guggenheim’s groundbreaking gallery Art of This Century to the 1960 Venice Biennale and retrospective exhibitions at the Whitney Museum of American Art (1957) and the Museum of Modern Art (1963).

In 1957, at the age of seventy-seven, Hofmann closed his schools and turned to painting full time for the first time in more than forty years. He painted actively through the next decade, producing some of the most powerful and fully resolved works of his career—several of which are included in this exhibition. All painterly gesture and action, his pictorial surface no longer referred to the external world but was transformed into an expressive, independent reality of its own, a continuous present of vibrant colors and shapes.

In conjunction with the exhibition, BAMPFA is partnering with UC Press on the publication of a 184-page catalog that advances in-depth new scholarship on Hofmann’s life and work, building on the newfound scholarly attention his legacy has received following the publication of the catalog raisonnée. The fully illustrated catalog includes new essays on Hofmann by curator Lucinda Barnes; Ellen G. Laudau, Andrew W. Mellon Professor Emerita of the Humanities at Case Western Reserve University; and Michael Schreyach, associate professor of art history at Trinity University, San Antonio.

Hans Hofmann: The Nature of Abstraction marks a major milestone in BAMPFA’s unique history with the artist, who in 1963 donated to UC Berkeley nearly fifty of his most significant paintings, along with a substantial cash contribution toward the construction of a new museum building. In addition to supporting the realization of UC Berkeley’s first purpose-built art museum, this transformative gift established twentieth-century painting as a major strength of BAMPFA’s encyclopedic collection, which today includes the world’s most extensive museum holdings of Hofmann’s work.

“We’re thrilled to renew the legacy of Hans Hofmann with an exhibition of unprecedented breadth and scholarship, which celebrates the work of an artist whose contributions to American painting—and to BAMPFA’s institutional vitality—reverberate to this day,” said BAMPFA Director and Chief Curator Lawrence Rinder. “Following on the success of our Charles Howard and Harvey Quaytman retrospectives, The Nature of Abstraction affirms the distinguishing strength of American abstract painting as a cornerstone of BAMPFA’s robust exhibition program.”

“As the home of the premier museum collection of Hofmann’s work in the world, we’re delighted to pair some of the most celebrated masterworks from BAMPFA’s holdings with equally important works from around the globe—some of which have never been exhibited in a museum setting,” said Barnes, who organized multiple Hofmann exhibitions during her fifteen-year tenure at UC Berkeley. “This exhibition offers audiences the chance to discover Hofmann’s magnificent body of work for the first time, and a fresh opportunity for those already familiar with Hofmann to experience new revelations across the full arc of his career.”

A series of public programs with complement the exhibition, including multiple presentations by visiting scholars to discuss Hofmann’s work. A full schedule of programs will be announced soon and will be available at bampfa.org.

Hans Hofmann (1880–1966) is one of the most important figures of postwar American art. Celebrated for his exuberant, color-filled canvases, and renowned as an influential teacher for generations of artists—first in his native Germany, then in New York and Provincetown—Hofmann played a pivotal role in the development of Abstract Expressionism.

Between 1900 and 1930, Hofmann’s early studies, decades of painting, and schools of art took him to Munich, to Paris, then back to Munich. By 1933, and for the next four decades, he lived in New York and in Provincetown. Hofmann’s evolution from foremost art teacher to pivotal modern artist brought him into contact with many of the most notable artists, critics, and dealers of the twentieth century: Henri Matisse, Pablo Picasso, Georges Braque, Wassily Kandinsky, Sonia and Robert Delauney, Betty Parsons, Peggy Guggenheim, Lee Krasner, Jackson Pollock, and many others. His successful career was shepherded by the postwar modern art dealer Sam Kootz, secured by the art historian and critic Clement Greenberg, and anchored by the professional and personal support of his first wife, Maria “Miz” Wolfegg (1885–1963).

Already 64 by the time of his first solo exhibition at Art of This Century in New York in 1944, Hofmann balanced the demands of teaching and painting until he closed his schools in 1957. Doing so enabled him to renew focus on his own painting at during the heyday of Abstract Expressionism, and for the next decade, Hofmann’s voluminous output—powerfully influenced by Matisse’s use of color and Cubism’s displacement of form—developed into an artistic approach and theory he called “push and pull,” which he described as interdependent relationships between form, color, and space. From his early landscapes of the 1930s, to his “slab” paintings of the late 1950s, and his abstract works at the end of his career upon his death in 1966, Hofmann continued to create boldly experimental color combinations and formal contrasts that transcended genre and style.

Hans Hofmann: The Nature of Abstraction is organized by Curator Emerita Lucinda Barnes with Curatorial Assistant Matthew Coleman. The exhibition is made possible with lead support from the Renate, Hans & Maria Hofmann Trust. Major support is provided by Bob and Dana Emery and Elissa Edelstein Warner. Additional support is provided by Charles and Naomie Kremer, the Terra Foundation for American Art, the Nancy and Joachim Bechtle Foundation, and an anonymous donor.