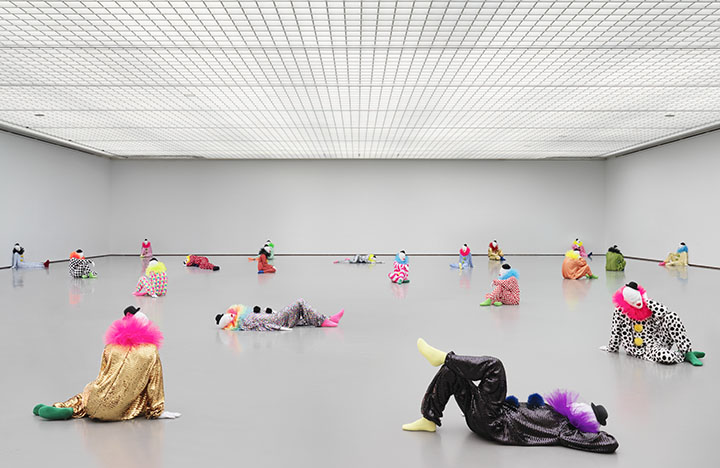 (Berkeley, CA) May 23, 2017—This summer, the UC Berkeley Art Museum and Pacific Film Archive (BAMPFA) presents a major exhibition of work by Ugo Rondinone, marking the artist’s first solo exhibition in the Bay Area. Ugo Rondinone: the world just makes me laugh showcases some of Rondinone’s most celebrated and iconic works, which capture the artist’s distinctive blend of colorful whimsy and melancholic undertones. The exhibition centers on an immersive, gallery-wide installation consisting of forty-five life-size sculptures of festively attired clowns.

On view from June 28 through August 27, the exhibition features multiple works that highlight Rondinone’s interest in the visual iconography of childhood, including four pairs of clown shoes, a series of eight rainbow “sun paintings,” a massive lightbulb sculpted from wax, and excerpts from a fictional diary that the artist maintained in 1998. Ugo Rondinone: the world just makes me laugh also features a new collage installation created specifically for the exhibition, comprising thousands of children’s drawings of rainbows—including several hundred drawings contributed by Bay Area children during school trips and family workshops at BAMPFA.

The centerpiece of the exhibition, vocabulary of solitude, fills BAMPFA’s gallery space with lifelike clown sculptures, whose prismatic outfits contrast with expressionless faces that convey a delicate sense of wistfulness. Drawing on art historical movements such as Romanticism and Surrealism, the installation also references the aesthetics of popular culture and the classical origins of clowning and mime performance. The forty-five clowns are each named individually based on the actions they perform: sleep, eat, dream, and other daily activities. Together they describe a day in the life of a single person at home during a twenty-four-hour loop of isolation.

The BAMPFA presentation of Ugo Rondinone: the world just makes me laugh marks the sole West Coast engagement of what Rondinone has described as a “serial exhibition,” variations of which were previously presented at the Museum Boijmans Van Beuningen, Rotterdam (February 2016); Museo D’Arte Contemporanea, Rome (June 2016); and Contemporary Art Center, Cincinnati (May 2017). Following its presentation at BAMPFA, the exhibition will travel to Miami’s Bass Museum of Art in fall 2017. The Berkeley exhibition is curated by BAMPFA Director and Chief Curator Lawrence Rinder.

“It’s a delight to introduce Northern California audiences to the work of Ugo Rondinone, an artist whose deceptively simple work captures the distinctively bizarre, comic, and gloomy tone of our times,” said Rinder. “We’re especially pleased to include in this presentation contributions from some of the youngest artists in our own community, and we look forward to welcoming visitors of all ages this summer for an exhibition that reflects BAMPFA’s own spirit of inclusiveness and accessibility.”

On Saturday, June 3, BAMPFA will host a “Rainbow Afternoon” for children ages four through ten to create rainbow drawings that Rondinone will incorporate into the exhibition. The event takes place from 1 to 5 p.m. and is free for children plus one accompanying adult. In conjunction with the exhibition opening, Rondinone will present an artist’s talk at BAMPFA on Wednesday, June 28 at 6 p.m., which is free with museum admission. As part of its monthly Family Fare programming, BAMPFA will offer special family-friendly tours coupled with artmaking activities during the exhibition.