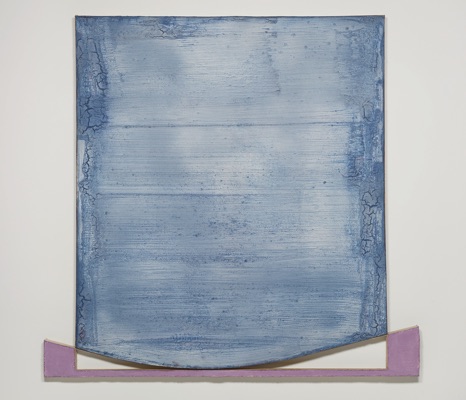 (Berkeley, CA) May 8, 2018—This fall, the University of California, Berkeley Art Museum and Pacific Film Archive (BAMPFA) presents the first comprehensive retrospective of work by Harvey Quaytman, an under-recognized figure in twentieth-century American painting noted for his monumental shaped canvasses, material investigations, and interest in color as a pure medium. Opening on October 17, 2018, Harvey Quaytman: Against the Static also marks the first posthumous museum exhibition for this artist, who left behind a prolific body of work when he passed away in 2002. Drawing from private and museum collections—including BAMPFA’s own significant postwar art holdings—the exhibition features more than seventy paintings and drawings that span Quaytman’s four-decade career, including many of Quaytman’s most significant, and rarely seen, works.

A native of Far Rockaway, Queens, Quaytman came of age in New York’s thriving downtown art scene in the 1960s, just as Abstract Expressionism was beginning to wane and newer movements such as Minimalism and Pop Art were taking root. His groundbreaking body of work resides at the juncture of Abstract Expressionism, Minimalism, Process Art and Constructivism—where considerations of line, distilled geometric forms, materiality, atmosphere, and texture coalesce. Quaytman pushed the boundaries of abstract painting, both formally and conceptually. In contrast to many of his contemporaries who were moving out of the studio and away from painting, Quaytman remained committed to working on canvas and to pushing the modernist idiom in a new direction with monumental shaped canvases that demonstrated his unique vision and style.

As a self-professed “classical modernist,” Quaytman’s paintings are characterized by his combined interest in shape, color, line, geometric pattern, and surface texture. Many of his earliest works employ the motif of a linear arc to create a lyrical, even playful effect—exemplified in such paintings as Second Cupola Capella (1969). His use of the curve is related to his interest in movement, propelling the eye across the painting. The exhibition’s title further underscores this interest, given that Quaytman once asserted in an interview, “my entire enterprise is against [the] static.”

Harvey Quaytman: Against the Static is organized into six galleries based on distinct phases of Quaytman’s creative trajectory, which saw him experiment with different aesthetic modes over the course of four decades.  Quaytman began his career in the early 1960s, making gestural, abstract paintings inspired by Willem de Kooning and Arshile Gorky. By the late ’60s, his focus on the character and shape of brushstrokes evolved into a unique style that blended minimalist abstraction with his interest in gesture, color, movement, and tactility. Strongly influenced by twentieth-century icons Kazimir Malevich, Piet Mondrian, and Henri Matisse, Quaytman’s work reveals a fascinating interplay between earlier strands of European Modernism and American postwar abstraction.

In the 1970s, along with artists including Frank Stella, Richard Smith, and Robert Mangold, Quaytman brought painting into a newly sculptural domain. Quaytman developed a unique mode of painting, making curved stretcher bars himself by scoring and steaming them in his studio in New York’s Bowery district. The resulting paintings, often distinguished by an arc shape that imbues them with a sense of movement, are also distinct for their attention to surface texture and experimental application of color as in Harmonica YP (1972), a highlight of BAMPFA’s collection. While these works display a rigorous commitment to formalism, they are simultaneously invested with rich undertones of sensuality, complexity, and humor.

Quaytman’s turn to geometric abstraction in the mid-1980s heralded a new direction in his painting, although his systematic investigation of form, materials, color, shape, and movement remained. The new definitive shape assumes the form of equilateral crosses, within the confines of more traditional square and rectangular formats witnessed in a painting like Wanderer (1987). These works present an austere contrast to his early paintings. And yet, through subtle chromatic and linear shifts, Quaytman was able to inject novelty into the most stable and historical of forms, and to keep the viewer’s eyes in continual motion. Finally, Quaytman returns to shape with large-scale crosses no longer set within a rectilinear format, such as The Illusionist (1997).

Harvey Quaytman: Against the Static marks the first major solo exhibition of Quaytman’s work since a focused retrospective at PS1 in 1999. As the artist’s first West Coast presentation, the exhibition is an unprecedented opportunity for Bay Area audiences to immerse themselves in the work of an artist whose singular contributions to twentieth-century modernism anticipate today’s renewed interest in the sculptural and material qualities of abstract painting.

“The totality of Harvey Quaytman’s highly original body of work places him squarely within the tradition of modernist painting, yet it also proves him to be one of its most capable and unsung explorers,” said the exhibition’s curator Apsara DiQuinzio, curator of modern and contemporary art and Phyllis C. Wattis MATRIX Curator at BAMPFA. “Even as Quaytman inhabited modernism, he incessantly pushed its boundaries and expanded its formal and conceptual concerns in ways that seem even more innovative in retrospect.”

In conjunction with the exhibition, DiQuinzio has edited an illustrated 176-page catalog that features the most in-depth scholarship on Quaytman to date. Published by UC Press, the catalog includes new essays by DiQuinzio, art historian Suzanne Hudson, art critic John Yau, as well as Quaytman’s daughter R. H. Quaytman—a noted artist in her own right, whose upcoming exhibition at the Solomon R. Guggenheim Museum coincides with BAMPFA’s presentation this fall.

“As the first West Coast institution to mount a retrospective of Harvey Quaytman, we are thrilled to introduce our visitors to the legacy of this remarkable artist, and to reacquaint a national and international audience with his enduring impact on the trajectory of twentieth-century modernism,” said BAMPFA Director and Chief Curator Lawrence Rinder. “Harvey Quaytman: Against the Static highlights BAMPFA’s distinguished tradition of mounting groundbreaking exhibitions of abstract painting—a consistent strength of our collection and exhibition program that dates back to a 1963 gift of work from Hans Hofmann and continues through last year’s Charles Howard retrospective.”

Born in 1937 in Queens, New York, Harvey Quaytman was the son of Polish-Russian Jewish immigrants. He was raised by his mother and Yiddish-speaking grandmother after his father and grandfather died in a tragic car accident returning from the World’s Fair in 1940. Quaytman studied at Syracuse University, the Boston Museum School, and Tufts University. He lived and worked in New York City throughout his life, maintaining a studio on the Bowery during the ’70s. There he worked along such artists as Brice Marden, Jake Berthot, Ron Gorchov, Sean Scully, and many others. During his lifetime, he received awards and fellowships from the Solomon R. Guggenheim Foundation, National Endowment for the Arts, Elizabeth Foundation, and CAPS, among other distinctions. In the late ’60s and early ’70s, Quaytman had gallery exhibitions at Paula Cooper Gallery, New York, the Onnasch Galerie, Cologne, and the Cunningham Ward Gallery, New York. In 1974, he began showing with the McKee Gallery, New York—the gallery that continued to represent him throughout his career. He exhibited frequently in galleries in the U.S. and abroad, including exhibitions at Galerie Nordenhake in Sweden and the Nielsen Gallery in Boston. Solo exhibitions included Ohio State University, Columbus; Contemporary Arts Museum, Houston; The Jewish Museum, New York; University of Rochester, New York; the Carpenter Center for the Visual Arts, Cambridge; Art Gallery of New South Wales, Sydney; Henie Onstad Kunstsenter, Oslo; the Institute of Contemporary Art at Maine College of Art, Portland; and PS1 Contemporary Art Center, Long Island City.

Quaytman died in 2002 and is survived by his two daughters R. H. Quaytman and Emma Quaytman, both painters, and his wife, Margaret Moorman.

Harvey Quaytman: Against the Static is organized by Apsara DiQuinzio, curator of modern and contemporary art and Phyllis C. Wattis MATRIX Curator, with Valerie Moon, curatorial assistant. The exhibition is made possible with lead support from the Terra Foundation for American Art, The Andy Warhol Foundation for the Visual Arts, R. H. Quaytman, and Van Doren Waxter, New York. Additional support is provided by Renee and David McKee and the Harvey Quaytman Trust.