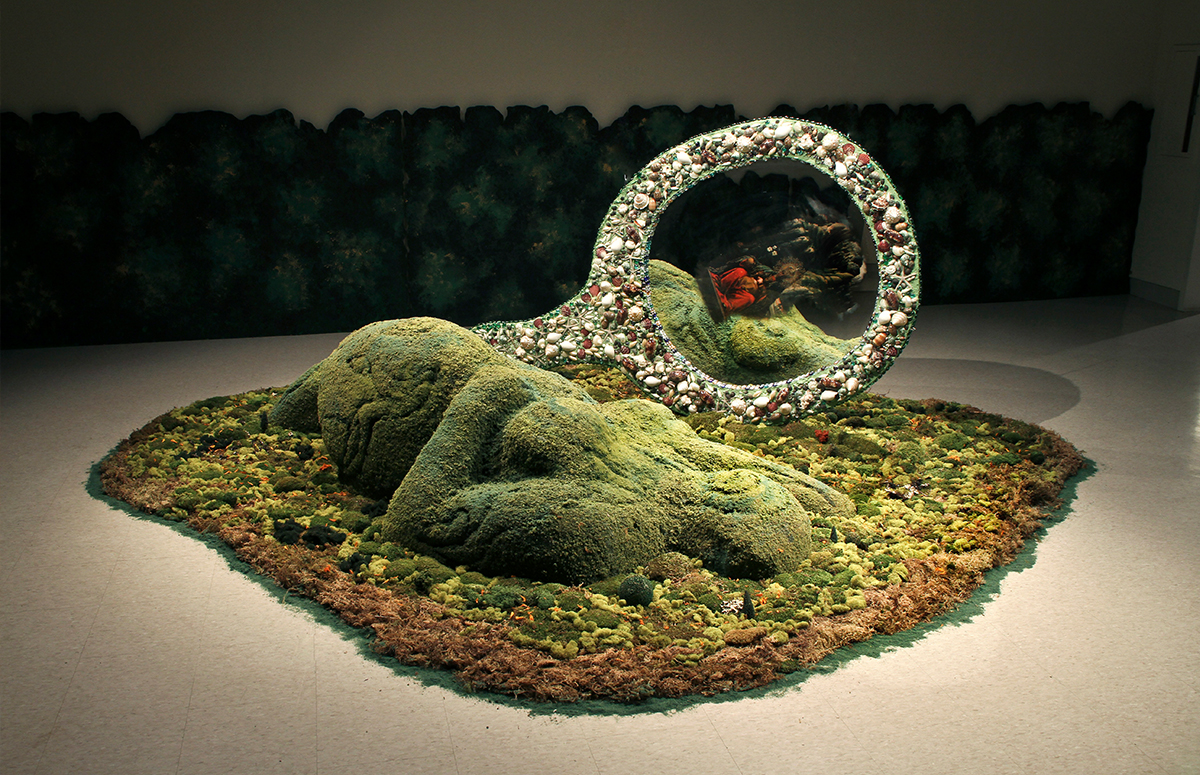 (Berkeley, CA) November 29, 2022—The Berkeley Art Museum and Pacific Film Archive (BAMPFA) is organizing the first retrospective of Amalia Mesa-Bains, the acclaimed multimedia artist who is widely regarded as one of the leading figures of Chicanx art. Opening on February 4, 2023, Amalia Mesa-Bains: Archaeology of Memory will trace more than three decades of the 79-year-old artist’s celebrated career, during which she has helped bring Chicanx art to the attention of the contemporary art world through her tireless advocacy and practice. The exhibition will encompass nearly sixty artworks by Mesa-Bains in a range of media, including several of the iconic “altar-installations” for which she is best known—many of which will be displayed together for the first time in a single exhibition.

Born in Santa Clara, California to Mexican immigrant parents in 1943, Amalia Mesa-Bains has been a major force in the Chicanx art community for nearly half a century, advancing the visibility of this important movement through education and advocacy as well as her own artistic output. Her work explores themes of cultural diversity, environmentally centered spirituality, and intersectional feminisms that have grown ever more relevant to contemporary discourse over the course of her career. Mesa-Bains’s interest in Mexican Indigenous ancestral traditions is reflected in her altar installations, a form of gallery-wide multimedia work she pioneered in the 1970s that reimagines traditional practices such as the home altar or roadside shrine through a contemporary lens. Many of these works offer a feminist perspective on the domestic life of immigrant and Mexican American women across different historical periods—most notably the four-part installation series Venus Envy, which was created over multiple decades and will be displayed in its entirety for the first time at BAMPFA.

Other works featured in the exhibition include Mesa-Bains’s armoire-based installations from the 1990s and 2000s that incorporate the closet as a site of investigation to be opened, scraped, and sorted through in order to recuperate personal and national histories. Sometimes displaying works from present-day museum collections, these cabinet-like installations are embedded with subtle references to European colonial extraction of cultural objects, which were often displayed in “curiosity cabinets” that became forerunners of the modern museum. Mesa-Bains’s archaeological inquiry into colonial erasure and women’s histories is remedied through her practice of creating “work sites’’ for historical reinterpretation, such as the opened closets and drawers of armoires, the contents of laboratory and desk tables, and handmade books.

In total, Amalia Mesa-Bains: Archeology of Memory will feature ten of Mesa-Bains’s large-scale installations, as well as twenty-one prints and seven books created between 1984 and 2018. These works were selected in collaboration with the artist by the exhibition’s co-curators María Esther Fernández, the inaugural artistic director of the Cheech Marin Center for Chicano Art and Culture at the Riverside Art Museum; and Laura Elisa Pérez, a professor in UC Berkeley’s department of ethnic studies and co-chair of the university’s Latinx Research Center. Pérez is also the co-producer of the new short documentary Amalia Mesa-Bains: In Her Own Worlds, which was directed by award-winning filmmaker Ray Telles, with cinematography by Daniel Telles, and will premiere as a video installation in the exhibition gallery.

Fernández and Pérez also edited a fully illustrated, 176-page catalog that will accompany the exhibition, the first major scholarly publication on Mesa-Bains’s body of work. Co-published by BAMPFA and UC Press, the catalog will feature sevenoriginal essays by the exhibition’s curators and other distinguished scholars, as well as an essay by the artist reflecting on the objects and materials that recur throughout her practice. The retrospective and catalog are supported by a $100,000 grant from the Andy Warhol Foundation that BAMPFA received earlier this year; this grant will also support a range of public programs associated with the exhibition, including gallery tours, artist-led workshops, a scholarly symposium on Mesa-Bains’s career, and a panel discussion with the artist herself on Saturday, February 18 at 1 p.m. For more information about public programs associated with the exhibition, visit bampfa.org.

Mesa-Bains’s work is included in numerous prominent museum collections, including at the Whitney Museum of American Art, The Smithsonian Institution, and San Francisco’s Museum of Modern Art, among others. Her work has also been shown in Europe at the Contemporary Exhibition Center of Lyon, France and the Kulturhuset in Stockholm, Sweden. In addition to her art practice, Mesa-Bains is also a distinguished author, curator, and educator who holds a Ph.D. in clinical psychology from the Wright Institute in Berkeley and began her career as a teacher in San Francisco’s public school system. She has curated numerous exhibitions and written many curatorial essays providing critical frameworks from which to understand Chicanx and other Latinx art. Although she has received numerous international awards—including a MacArthur “Genius” Grant in 1992—Mesa-Bains has never been the subject of a comprehensive career retrospective until now.

“BAMPFA is deeply honored to mount the first major retrospective of Amalia Mesa-Bains, an artist who has spent more than four decades leading the movement to bring Chicanx perspectives into an art world that too often marginalizes them,” said Julie Rodrigues Widholm, BAMPFA’s executive director. “This exhibition advances BAMPFA’s commitment to lifting up historically underrecognized artists, particularly those with roots in the Bay Area, whose work reflects a fuller spectrum of our communities—as well as our recent focus on the work of late-career female artists whose persistence and artistic contributions paved the way for so many artists working today.”

“It has been an honor to co-curate the exhibition and to edit the exhibition catalog of an artist who remains steadfast in her commitment to social justice. Through her feminist, antiracist, highly intelligent, and compassionate artworks, Amalia not only uncovers the hidden histories of women, immigrants, the undocumented, Mexican Americans, Chicana/o/xs, and other people of color, but also counters the psychologically and spiritually dehumanizing effects of patriarchal, Eurocentric, classist, and racist thought,” said Pérez. “In her dazzling work, the socially humbled, economically disenfranchised, and culturally belittled are not just seen, but rendered valuable and fully human. Studying Amalia’s work has been an apprenticeship in courage, compassion, and commitment.”

Amalia Mesa-Bains: Archaeology of Memory is organized by the Berkeley Art Museum and Pacific Film Archive in collaboration with the Latinx Research Center (LRC) at UC Berkeley. The exhibition is guest curated by ​​Dr. Laura E. Pérez, Professor and Chair of the LRC, and María Esther Fernández, Artistic Director of The Cheech Marin Center for Chicano Art & Culture of the Riverside Art Museum.

The exhibition is made possible by generous lead support from the Henry Luce Foundation and The Andy Warhol Foundation for the Visual Arts. Major funding is provided by Margarita Gandia and Diana Campoamor, Marta Thoma Hall, Pamela and David Hornik, and the UC Berkeley Latinx Research Center.