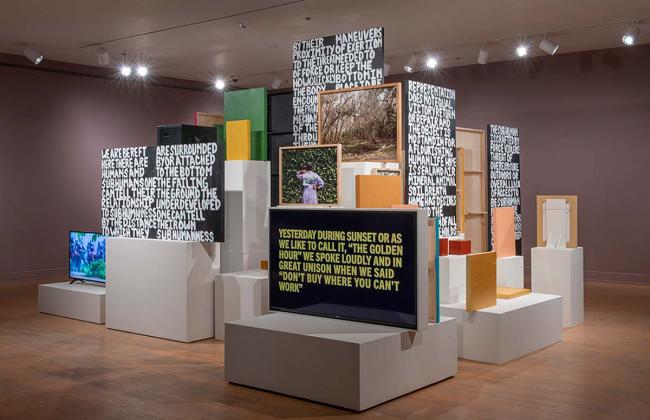 (Berkeley, CA) August 16, 2022—The UC Berkeley Art Museum and Pacific Film Archive (BAMPFA) will inaugurate its fall exhibition season with an ambitious group exhibition that analyzes historical images of incarceration in direct conversation with newly commissioned works of art. Undoing Time: Art and Histories of Incarceration showcases twelve emerging and established artists, each of whom has been invited to create an installation that explores the philosophical, sociological, and art historical roots of today’s mass incarceration crisis. The exhibition will occupy BAMPFA’s main gallery space through the fall season and will also include an off-site sound-based performance on Alcatraz Island.

As part of the commissioning process, the artists featured in Undoing Time—Carolina Aranibar-Fernández, Juan Brener, Raven Chacon, Cannupa Hanska Luger, Ashley Hunt, Sandra de la Loza, Michael Rohd, Paul Rucker, Xaviera Simmons, Stephanie Syjuco, Vincent Valdez, Mario Ybarra Jr.—participated in a series of workshops and public conversations throughout 2020 that also included curators, scholars, students, activists, and community organizers working on carceral issues. This innovative research process was convened by the Arizona State University Art Museum, which organized and premiered the exhibition in 2021. The artists’ collaborations with local prison activists deeply shaped the twelve works that they ultimately produced for Undoing Time, reflected in part by their strong focus on incarcerated communities of the American West and Southwest as a counterpoint to dominant media representations of prison life. These commissioned works incorporate a wide range of media and materials, including historical documentation and ephemera drawn from the experience of incarceration, as well as immersive and participatory elements installed throughout the gallery.

Undoing Time includes an introductory section in an adjacent gallery dedicated to historical images of incarceration and its impacts, illuminating how artistic and documentary representations of incarceration have developed across geographical and cultural contexts. Selected in collaboration with the artist and activist Ashley Hunt, whose own work appears in the main gallery, these images will be projected on multiple screens throughout the space, highlighting recurring visual themes in the representations of prison life ranging from religious penitence to the aesthetics of prison architecture. These materials were a crucial part of the artists’ research process and provide important historical context for their aesthetic explorations of the interlocking power structures and legacies of oppression inherent in contemporary prison life.

The artists selected for Undoing Time come from a diverse array of backgrounds and communities across the United States and Latin America, including multiple indigenous artists from the American Southwest. Four of the twelve artists are based in California, including Oakland’s Stephanie Syjuco—whose photography-based installation Shutter/Release (2021) uses the “healing brush” tool in photoshop to symbolically remove evidence of colonial and carceral structures from archival images from the Philippines in the nineteenth and twentieth centuries. Other notable works include Carolina Aranibar-Fernández’s Multi-ples Capas (2021), an interactive floor installation of adobe bricks stamped to resemble the license plates produced by prison labor; and Paul Rucker’s The Joy of Land Development (2021), a video installation that interrogates the racist archetype of Geronimo and recenters the historical Apache leader who was held as a prisoner of war for twenty years.

Also included in this slate of new commissions is a site-specific sound-based work created by Raven Chacon, which will be presented on Alcatraz Island on Sunday, November 6. A Pulitzer Prize-winning artist and composer affiliated with the Diné tribe, Chacon has created a sonic meditation on the histories of Alcatraz, including its occupation for nineteen months beginning in 1969 by a group of Native American activists protesting civil rights abuses. Chacon’s performance will incorporate pre-recorded sounds of prison complexes in the Bay Area, as well as archival footage of broadcasts produced by the occupying activists themselves during their time on the island. More information about this presentation will be announced later this fall; visit bampfa.org for the latest updates.

BAMPFA will mount a range of educational and public programs in conjunction with the exhibition, including a free community day on Saturday, September 17, featuring a talk by guest curator Julio César Morales; a scholarly colloquium on Saturday, November 5; a lecture by Morales on Friday, November 4; and a series of exhibition tours led by students from the Berkeley Underground Scholars Program. BAMPFA’s film department is also mounting a film series in association with the exhibition, Undoing Time: Cinema and Histories of Incarceration; the series, which runs from September 8 through November 16, will showcase classic and contemporary films that highlight diverse perspectives on the carceral experience past and present.

“One of the defining attributes of BAMPFA’s exhibition program is our enduring support for artists whose work challenges us to think in new ways about the most urgent issues facing our society today,” said BAMPFA Director Julie Rodrigues Widholm. “Undoing Time exemplifies BAMPFA’s commitment to how art and film can contribute to much-needed narrative change. The ASU Art Museum team approached this project with a creative, critical and collaborative spirit that made it a natural fit for BAMPFA to present in response to highly visible histories and carceral sites, from Angel Island and Alcatraz to San Quentin in the Bay Area.”