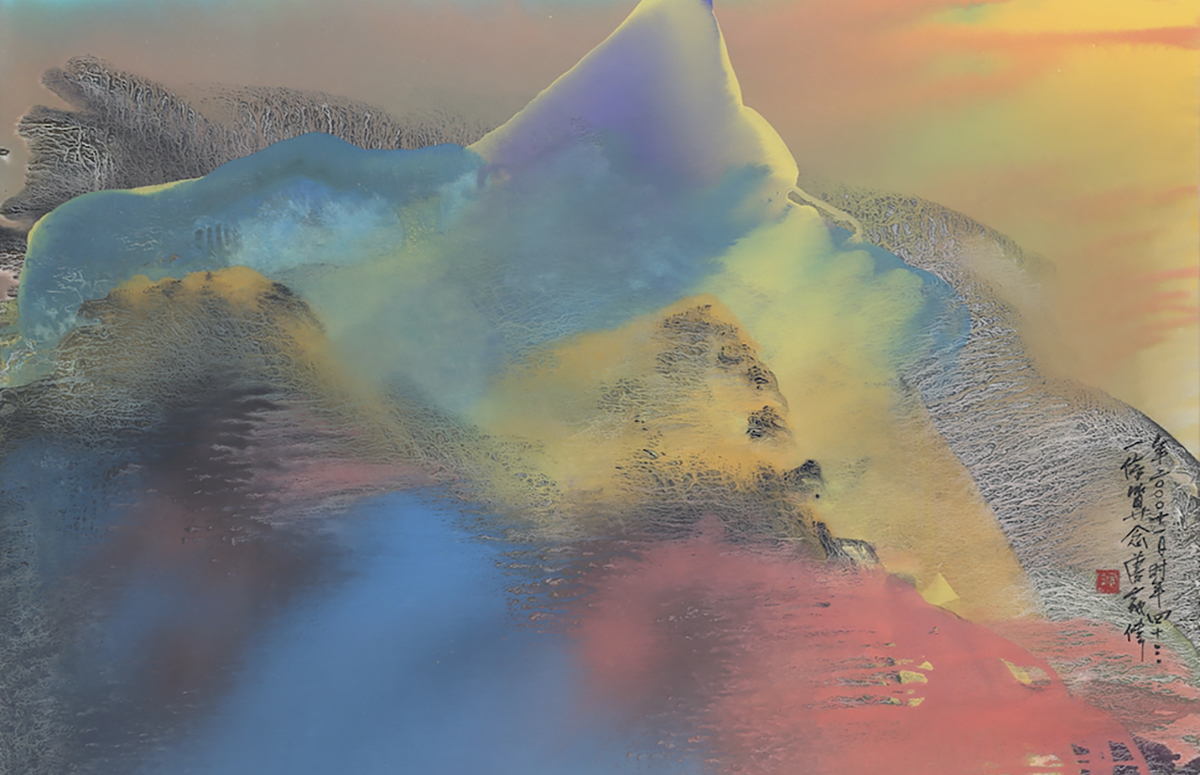 (Berkeley, CA) November 9, 2021—The UC Berkeley Art Museum and Pacific Film Archive (BAMPFA) will open a major exhibition in January of work by the late Hong Kong artist Wesley Tongson, drawn in part from a recent bequest to the museum of eleven works by the painter that have never been exhibited in the United States. Spiritual Mountains: The Art of Wesley Tongson will survey the rich artistic output of this underrecognized artist (1957–2012), whose eclectic body of work encompassed landscape, calligraphy, and abstract compositions. For the first time, these works will be displayed at BAMPFA alongside rare examples of traditional Chinese ink paintings from the Qing Dynasty and early twentieth century, illuminating the deep and understudied influence of these traditions on Tongson’s contemporary practice.

Spiritual Mountains: The Art of Wesley Tongson will feature more than twenty paintings by Tongson, eleven of which have been donated to BAMPFA by the artist’s family. The selection of works in the exhibition illuminates the wide range of Tongson’s practice, which began in his late teens with traditional calligraphy and continued into later explorations of figurative ink-and-brush painting and eventually more abstract modes. Famously private about his working methods, Tongson was known to experiment with the direct application of ink to paper using splash techniques and eventually his fingers and hands, creating works of strong personal expression rarely seen in Chinese painting. His paintings alternate between black-and-white and vivid bursts of color, often with references to traditional Chinese landscape painting in their titles or compositional geometry.

Spiritual Mountains: The Art of Wesley Tongson is organized thematically based on the varied modes of Tongson’s practice, with his calligraphic, figurative, and abstract works presented alongside paintings by earlier artists. While historical Chinese painting has long been noted as an influence on Tongson’s practice, Spiritual Mountains: The Art of Wesley Tongson marks the first time that his work has been displayed alongside these earlier paintings, including by artists like Liu Guosong and Harold Wong who taught and mentored Tongson during his early years. Drawing from BAMPFA’s exceptional collection strengths in Chinese historical painting as well as multiple private loans, the exhibition will encompass more than twenty examples of traditional Chinese brush painting, including landscape and calligraphy works from Qing-era painters. Both the classical selections and Tongson’s own body of work include large-scale paintings ranging up to seven feet in length. Alongside these works, the exhibition will feature a Cubist portrait from BAMPFA’s collection by Pablo Picasso (L’Homme à la guitare, 1915), the Western artist most often cited by Tongson as a major influence.

Despite being diagnosed with schizophrenia at an early age, Tongson maintained a rigorous and prolific creative practice throughout his life. Tongson’s family members have cited his struggles with schizophrenia as an important factor in shaping his artistic vision, along with a deep devotion to Zen Buddhist philosophy that is especially evident in later paintings such as his celebrated Mountain of Heaven series, which is featured prominently in the BAMPFA exhibition. Although his multiple solo exhibitions in Hong Kong were met with great acclaim, Tongson was not widely recognized in Europe and North America during his lifetime, and his work was almost entirely unseen in public settings during the final fifteen years of his life. Spiritual Mountains: The Art of Wesley Tongson marks a major milestone in the posthumous reappraisal of Tongson’s work that has accelerated in recent years with solo exhibitions in Hong Kong and the United States, including a retrospective at the Chinese Culture Center of San Francisco in 2018.

“During his short life, Wesley Tongson produced a remarkable body of work that is deeply connected to the rich historical tradition of Chinese painting, even as it articulates a distinctively modern artistic vision that was entirely his own,” said Senior Curator for Asian Art Julia M. White, who curated the exhibition. “We’re very grateful to Wesley’s family for entrusting us with a piece of this legacy through their generous bequest of eleven of his finest works, which we’re excited to present to North American audiences for the first time. BAMPFA’s exceptionally strong holdings in Chinese painting make the museum particularly well-suited to advance the conversation about this artist, by mounting the first exhibition to consider these works alongside the historical antecedents that Wesley himself considered a major influence on his practice.”

“It’s exciting for BAMPFA to offer our visitors a fresh look at this important artist whose work has been seldom seen in the United States, and to do so in an exhibition that positions him in dialogue with the history of Chinese painting that is so vibrantly represented in our Asian art holdings,” said BAMPFA Director Julie Rodrigues Widholm. “At BAMPFA, we’re proud of our commitment to expanding the art historical canon by lifting up the voices of underrecognized artists and underrepresented communities—and by centering those voices within an intergenerational narrative alongside works from our own collection, which here adds illuminating context to our understanding of Wesley Tongson.”

In conjunction with Spiritual Mountains: The Art of Wesley Tongson, BAMPFA will host a lecture and gallery tour by the noted Canadian art historian Catherine Maudsley, which will take place in Spring 2022. Other public and educational programs will be announced in the coming weeks; visit bampfa.org for the latest programming updates.