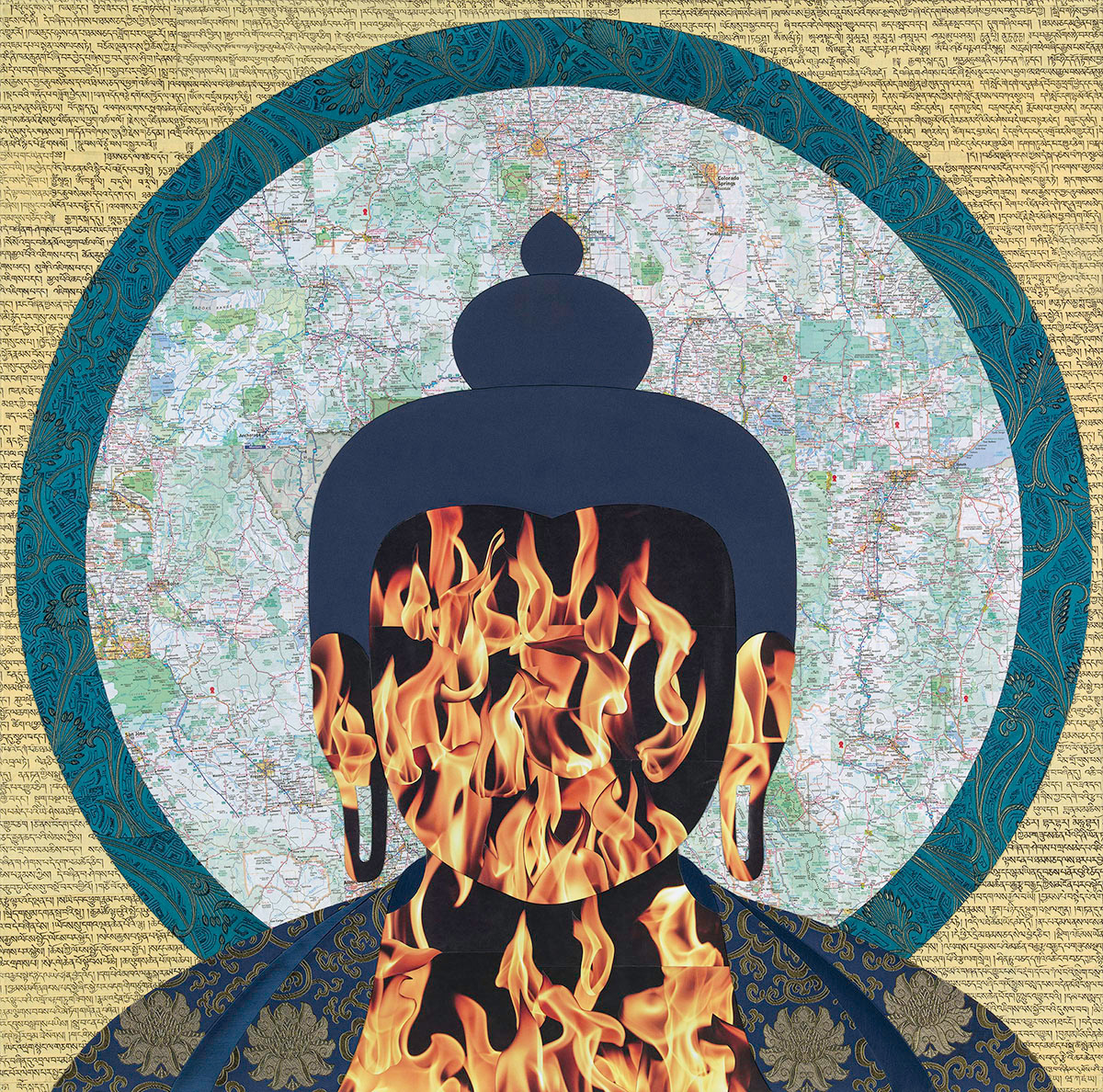 (Berkeley, CA) September 18, 2018—This fall, the UC Berkeley Art Museum and Pacific Film Archive (BAMPFA) presents a groundbreaking exhibition of work by some of the most celebrated contemporary artists of Tibet and the Tibetan Diaspora. Boundless: Contemporary Tibetan Artists at Home and Abroad marks the first major exhibition of contemporary Tibetan art ever mounted in the East Bay, home to the fourth-largest Tibetan community in North America. The exhibition features more than two dozen works by a bold new generation of Tibetan artists, juxtaposed with centuries-old Buddhist artifacts from the Himalayan region that inform the cultural context of their work.

Based in locations as diverse as Lhasa, Dharamsala, Kathmandu, New York, and the Bay Area, the artists of Boundless are united by their shared engagement with the traditions of Tibetan Buddhist art and philosophy, which they have reimagined in a range of media—from painting and sculpture to video installations and performance. Even as they draw inspiration from ancestral creative practices, these artists have adopted a vividly contemporary aesthetic that engages the political and cultural discourses of Tibetan identity in the twenty-first century. Many of the works in Boundless convey a sense of trauma and outrage over Tibet’s contested political status, while others reflect the artists’ experiences as uprooted exiles living in foreign lands.

Several of the artists included in the exhibition live in present-day Tibet and China, where their work often explores the fragility of Tibetan cultural identity under the occupying presence of the Chinese state. These daily tensions are subtly depicted in works like the video Floating River Ice (2003) by Benchung, which documents the artist drawing traditional chalk sketches on the streets of Lhasa that are quickly erased by the city’s bustling foot traffic. The theme of cultural expunction is presented more explicitly in Buddha in Our Times (2010) by the Lhasa-born, Chengdu-based artist Gonkar Gyatso—which depicts a Buddha figure assembled from a collage of Chinese and Western corporate logos.

Boundless suggests a dialogue between the domestic art scene of contemporary Tibet and work being produced by Tibetan artists living abroad—some of whom have never been permitted to travel to their homeland. One of the leading figures in this growing movement is Tenzing Rigdol, an internationally acclaimed artist, poet, and activist whose mixed-media collage Exile in the Garden of Eden (2017) alludes to his personal history as a member of the Tibetan refugee community. His Wrathful Dance (2014)—a silhouette of the Buddha engulfed in flames—references the rising incidence of self-immolations in Tibetan monastic communities as a means of protesting Chinese oppression. Boundless features works by several other Tibetan diasporic artists who have achieved international recognition, including Chungpo, Sodhon, Marie-Dolma Chophel, and Tsherin Sherpa—who visits BAMPFA for an artist’s talk on Sunday, October 7 at 3 PM.

As one of the first museum surveys of contemporary Tibetan art, Boundless calls attention to the growing movement of artists who are advancing new conceptions of Tibetan identity as part of a globalized, geographically diffuse diaspora. The exhibition distinctively positions work by these artists alongside rare historical objects from BAMPFA’s permanent and extended loan collection of Himalayan art, a notable area of strength in the museum’s 19,000-work encyclopedic holdings. Nearly a dozen historical Tibetan paintings, sculptures, and ceremonial objects are included in the exhibition, accompanied by interpretative text that illuminates nuanced and surprising continuities between Tibetan art-making practices of the past and present.

Art from the Himalayan region has long been a major highlight of BAMPFA’s exhibition program, reflecting the museum’s proximity to one of the largest Tibetan communities in North America. The Bay Area’s Tibetan population has grown significantly over the past twenty years to more than 3,000 residents, many of whom live in northern Alameda and West Contra Costa counties. As the first museum exhibition of its kind ever mounted in the East Bay, Boundless provides a fresh opportunity for Tibetan and Western audiences alike to appreciate the vibrancy and historical resonance of Tibetan art in the twenty-first century.

“Boundless arrives at a moment when Tibetan artists have emerged as a major force in the contemporary art landscape for the first time in history, capturing international attention with work that offers a fresh perspective on the complexities of Tibetan identity, politics, and culture,” said Yi Yi Mon (Rosaline) Kyo, the Andrew W. Mellon Postdoctoral Curatorial Fellow who organized the exhibition. “As home to one of the most significant Tibetan populations in North America, the East Bay is overdue for a major museum exhibition that allows our local communities to experience the work of this global movement firsthand.”

“While Tibetan art has long been a cornerstone of BAMPFA’s collection, we’re excited to complement this strength by showcasing a talented new generation of artists who are renewing and reinterpreting Tibet’s artistic traditions for a twenty-first century audience,” said Senior Curator for Asian Art Julia White. “With our deep holdings of historical artifacts from the Himalayan region, BAMPFA is distinctively equipped to present these new works in a broader context that will deepen audiences’ appreciation for the artists’ ongoing dialogue with Tibetan cultural heritage.”