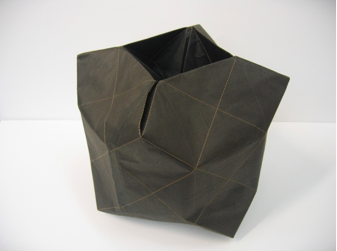 (Berkeley, CA) March 22, 2021—A major new survey of textile art by Kay Sekimachi will be among the first exhibitions to open at the UC Berkeley Art Museum and Pacific Film Archive (BAMPFA) when the museum resumes in-person programming this spring. Kay Sekimachi: Geometries is an extensive solo exhibition of work by the Berkeley-based artist, who has been a significant figure in the fiber arts community for more than seventy years. The exhibition encompasses nearly fifty objects spanning six decades of Sekimachi’s creative practice, highlighting formal and material breakthroughs that illustrate her influence on the field of fiber arts.

Beginning with her key role in the international fiber arts movement that emerged in the 1960s, Sekimachi has repeatedly expanded the boundaries of the medium with innovative construction techniques and formal strategies. Her work often uses pliable materials like thread, paper, and other natural materials to make dynamic three-dimensional objects. Sekimachi first became known for her early use of nylon monofilament to create hanging abstract sculptures, a radical break from the wall-bound figurative tapestries that had previously defined the field. Her later work encompasses an eclectic range of different forms, including woven boxes, origami paper constructions, and woven and printed books. Though small in scale, these objects are each meticulously constructed—often using the traditional production methods or materials of the artist’s Japanese heritage. Her work is characterized by its application of economical solutions to complex technical innovations, as well its emphasis on a harmony of opposites: density and translucency, complexity and simplicity, technique and free expression.

Kay Sekimachi: Geometries will present a selection of Sekimachi’s work dating back as early as 1965, assembled from private and museum collections, including BAMPFA’s own holdings. At the exhibition gallery’s center will be a gathering of suspended objects, including Sekimachi’s early monofilament sculptures and card-woven works she describes as kawas and marugawas (translated as “rivers” and “round rivers”). The exhibition will also include examples of the artist’s smaller-scale fiber sculptures, including woven boxes, origami-inspired folded objects, and handmade books. The most recent works featured in the survey are small-scale minimalist weavings, created in homage to the paintings of Paul Klee and Agnes Martin.

Though Sekimachi has exhibited extensively throughout her career, Kay Sekimachi: Geometries marks the artist’s first solo museum exhibition in the city of Berkeley, where she has lived since 1930. A first-generation child of Japanese immigrants who was forcibly resettled in internment camps during World War II, Sekimachi went on to study and later teach at what was then the California College of Arts and Crafts (now California College of the Arts). A protégé of the German American textile artist Trude Guermonprez, Sekimachi soon turned to working with fiber materials to make artworks and eventually became a celebrated figure in an international movement that sought to expand the medium’s associations with traditional craftsmanship into a fine arts context. Even within the parameters of the fiber arts movement, Sekimachi’s experiments with three-dimensional form often stood apart from the work of her contemporaries, whose emphasis on coarse material texture contrasted with the ethereal weightlessness of her signature monofilament sculptures.

Kay Sekimachi: Geometries is organized by Jenelle Porter, an independent curator who has previously showcased Sekimachi’s work in two thematic exhibitions: Fiber: Sculpture 1960–Present at the Institute of Contemporary Art, Boston (2014), and A Line Can Go Anywhere at New York’s James Cohan Gallery (2017), which focused on Bay Area artists working in fiber. Porter worked closely on the BAMPFA exhibition with the artist herself, who at the age of ninety-four remains active in the fiber arts community and continues to produce work from her home studio in Berkeley.

“It is a privilege to organize this exhibition for Kay, an artist I’ve long admired and had the privilege of working with and learning from over the past several years. In addition, honoring a ‘California girl’ at her hometown museum—one of my personal lodestars for its legendary exhibition history—is just a gift,” said Porter. “Curators make exhibitions for many reasons, among them to see art in person, to gather objects together in a gallery so that we might generate knowledge, context, and conversation. Seeing Kay’s artwork in person after this long year of crises and closures will, I hope, be a kind of balm.”

Conceived prior to the COVID-19 pandemic, the exhibition remains on track to open on May 26, 2021, contingent on public health conditions permitting a safe resumption of in-person attendance at BAMPFA. Public programs for the exhibition will include a livestream panel discussion moderated by Porter, as well as online fiber art workshops through BAMPFA’s Art Lab. More information about these events will be announced soon; for the latest updates on programming and visitor safety protocols, visit bampfa.org.

“It’s hard to imagine a more appropriate way to welcome our audiences back to BAMPFA than by celebrating the work of a nationally distinguished artist who has been our neighbor here in Berkeley for nearly a century,” said Apsara DiQuinzio, BAMPFA’s senior curator of modern and contemporary art and Phyllis C. Wattis MATRIX Curator. “By offering fresh interpretive context to consider Kay Sekimachi’s many groundbreaking accomplishments in the field of fiber arts, this exhibition will advance BAMPFA’s commitment to uplifting diverse and wide-ranging voices that expand our understanding of contemporary art.”

Kay Sekimachi lives and works in Berkeley, California, where she has resided for most of the past ninety years. She attended the California College of Arts and Crafts from 1946 to 1949 and later studied at the Haystack Mountain School of Crafts in Liberty, Maine. Her past solo exhibitions include shows at the Mingei International Museum, San Diego (2001); de Young Museum, San Francisco (2016); and Fresno Art Museum (2018). Her work is included in the permanent collections of the Metropolitan Museum of Art; Smithsonian Institution; Museum of Fine Arts, Houston; Fine Art Museums of San Francisco; Honolulu Museum of Art; and Berkeley Art Museum and Pacific Film Archive, among many others. She has taught at the California College of the Arts and San Francisco Community College and has mentored many fiber artists in the Bay Area and beyond.

Kay Sekimachi: Geometriesis is organized by Jenelle Porter, guest curator, with Claire Frost, curatorial assistant.This exhibitionis supported in part by an award from the National Endowment for the Arts.