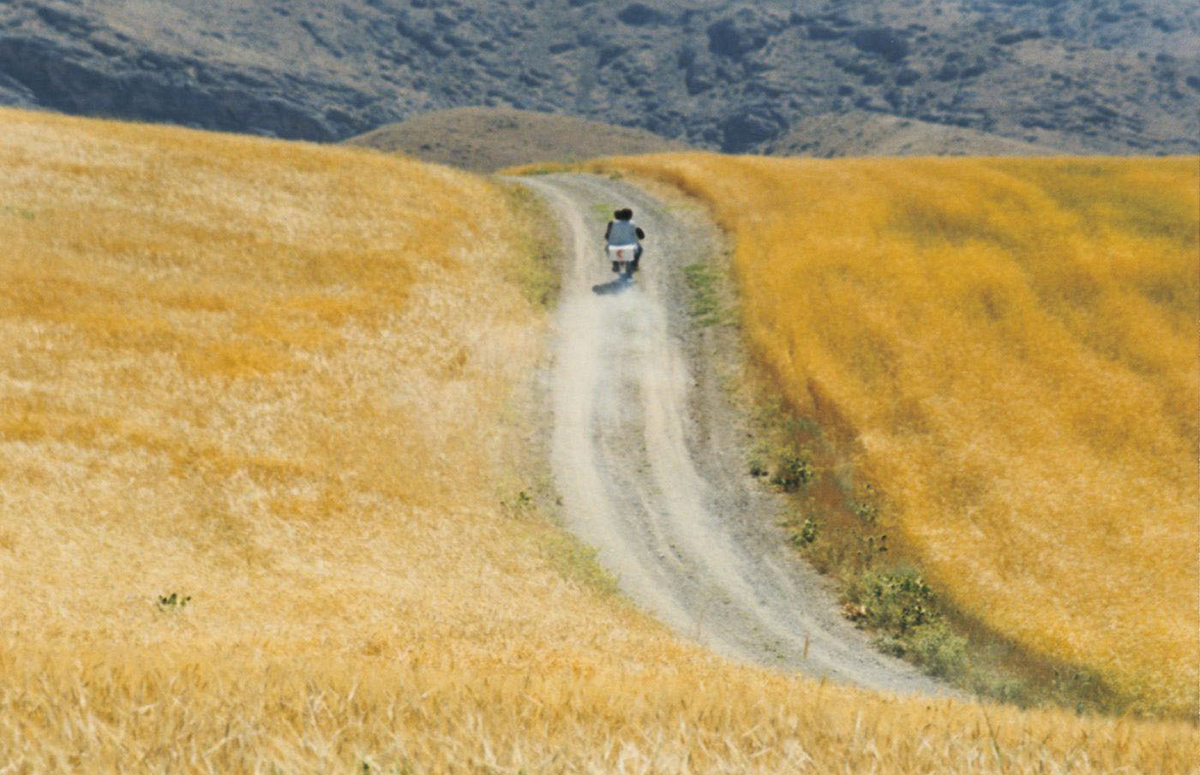 (Berkeley, CA) May 8, 2019—A touring series of films by Abbas Kiarostami opens at the UC Berkeley Art Museum and Pacific Film Archive (BAMPFA) this August, marking the first significant retrospective of the director’s work since he passed away in 2016. Presented in partnership with Janus Films, the five-month screening series encompasses all extant films directed by Kiarostami.A version of the retrospective is set to open at New York’s IFC Center on July 26, followed by a national tour organized by Janus Films. Together with a focused Kiarostami survey that runs concurrently at the Roxie Theater, the program marks the most significant retrospective of Kiarostami’s films ever mounted in the San Francisco Bay Area.

A towering figure in the Iranian film community and one of the preeminent world cinema auteurs of the past three decades, Abbas Kiarostami (1940–2016) was the recipient of numerous international honors—including the prestigious Palme d’Or at the Cannes Film Festival for Taste of Cherry (1996)—along with accolades from fellow directors such as Akira Kurosawa, Jean-Luc Godard, Martin Scorsese, and many others. Abbas Kiarostami: Life as Art comprises twenty-one features and eleven shorts directed by Kiarostami, as well as films directed by other filmmakers that are in dialogue with his work. Concurrent with the retrospective, BAMPFA is mounting a five-week lecture-screening series as part of its popular In Focus program, in which prominent scholars of Kiarostami’s work are invited to present remarks and lead discussions in conjunction with screenings of his films. The retrospective also includes appearances by Ahmad Kiarostami, a longtime champion of his father’s work, as founder of the Kiarostami Foundation.

“It’s a pleasure to partner with our colleagues at Janus Films in assembling this expansive program, which will provide audiences in the Bay Area and beyond with a new appreciation of Abbas Kiarostami’s remarkable body of work—including rarely screened gems that few American audiences have ever seen,” said BAMPFA’s Senior Film Curator Susan Oxtoby, who organized the series. “As a university-affiliated institution with a robust history of showcasing Kiarostami’s work during his lifetime, BAMPFA is an ideal venue to mount a series of this massive scale and scholarly depth.”

The initial schedule of screenings for Abbas Kiarostami: Life as Art follows below. All films are directed by Abbas Kiarostami unless otherwise noted. Additional dates and guest appearances, including screenings in the “In Focus” lecture series, will be announced at a later date; for current program information, visit bampfa.org.

A young boy in a rural village schemes and dreams his way to a big-city soccer match in Kiarostami’s first feature, similar to The 400 Blows. With the short Bread and Alley.

A television crew arrives at a remote Kurdish village to await a mourning ritual. While they wait for death, life happens. “A stunningly lyrical and eloquent exploration of both rural village life and the nature of artistic responsibility” (New York Times).

This beautiful picture of the life of a child in a northern Iranian village is the first film in Kiarostami’s beloved Koker trilogy.

Kiarostami seeks to find out the fate of the earthquake-devastated area of Koker and Poshteh from Where Is the Friend’s House? and finds willing actors among the survivors.

An unemployed film fanatic who impersonated director Mohsen Makhmalbaf is the subject of Kiarostami’s mind-bending docu-fictional masterpiece, which reenacts the entire affair with the impersonator and Makhmalbaf himself.

In Kiarostami’s fittingly self-reflective end to the Koker trilogy, a lovelorn youth gets another chance at romance when a visiting film crew casts him and his disinterested paramour as husband and wife.

A seven-year-old girl navigates the busy streets of Tehran while trying to buy a goldfish in the utterly charming debut of Jafar Panahi (3 Faces). Cowritten by Abbas Kiarostami, it’s “a reminder that the simplest forms of filmmaking can be the most satisfying” (Los Angeles Times).

An adolescent boy juggles a job as a photographer’s assistant, a first crush, and the urge to sample adulthood’s temptations in Kiarostami’s beautiful, nearly wordless tale. With The Wedding Suit, another vibrant portrait of working youths in Tehran.

Featuring a lecture by Abbas Milani, director of the Hamid and Christina Moghadam Program in Iranian Studies at Stanford University

A seemingly simple classroom struggle between teacher and students becomes an absorbing lesson in solidarity, ideology, and resistance in Kiarostami’s gripping documentary, filmed during the last days of the Shah and finished during the earliest days of the Islamic Revolution.

Play meets punishment in Kiarostami’s documentary on first graders reporting for their first day of school. With shorts Two Solutions for One Problem and Solution.

Anyone curious about what episodes of Sesame Street would look like if they were directed by one of the world’s greatest filmmakers should catch this collection of shorts by Kiarostami, made for an Iranian children’s cultural institute. Featuring the shorts So Can I, The Colors, The Chorus, Toothache, and How to Make Use of Leisure Time.

The Cannes prizewinning mystery of a man who searches for someone to help him commit suicide. Naturally, everyone he meets has an opinion on the subject. “A masterpiece” (the Nation).

In the front seat of her car, a young urban divorcee grapples with her anxieties in this “courageous, instinctive film . . . sometimes funny, sometimes moving, always engrossing” (Variety).

From the master himself, thoughts on filmmaking as a journey, delivered from—where else?—the front seat of his car. “An incisive, sometimes funny, and often provocative contemplation of the art of cinema” (Museum of Modern Art, New York).

For his first film shot outside Iran, Kiarostami went to Uganda to document the reality of children orphaned by AIDS. What he found was a network of widows creating a culture of support, in a place devastated by death but still full of life.

Kiarostami turns footage of a traffic cop beleaguered by demanding drivers into a study of verbal invention, miniature rebellion, and the fine line between order and disorder. With the short Tribute to Teachers.

Created for a museum exhibition in Barcelona and Paris that paired the works of Kiarostami and Víctor Erice, Correspondences is composed of ten “filmed letters” between the two master filmmakers.

A film about watching and most of all experiencing film, Shirin features close-ups of 112 Iranian actresses (and Juliette Binoche) as they view—or imagine—a movie. “An illusionist tour de force” (Jonathan Rosenbaum).

Juliette Binoche and William Shimell star in Kiarostami’s playful unspooling of the romance genre, set in a radiant Tuscany where nothing is quite as it seems. Binoche won Best Actress at Cannes for her role in this “brilliant, endlessly fascinating work” (New Yorker).

A young escort, her older client, and her jealous lover enact their various roles depending on who’s in front of them in Kiarostami’s last film, made in Japan. “An enthralling journey” (New York).

Kiarostami’s final work strips cinema down to its essence—a single frame—creating a hypnotic meditation on image making and the act of seeing that pays tribute to both cinema and the great director’s other passion, photography.

Made by a close friend and collaborator of Kiarostami, this intimate and subtly revealing portrait follows Kiarostami in Iran and abroad, at work as a photographer, filmmaker, installation artist, and poet.

Thanks to Ahmad Kiarostami and the Kiarostami Foundation, Janus Films, MK2, Cohen Media Group, IFC Films, and the Center for Middle Eastern Studies at UC Berkeley for their help in support of this retrospective.