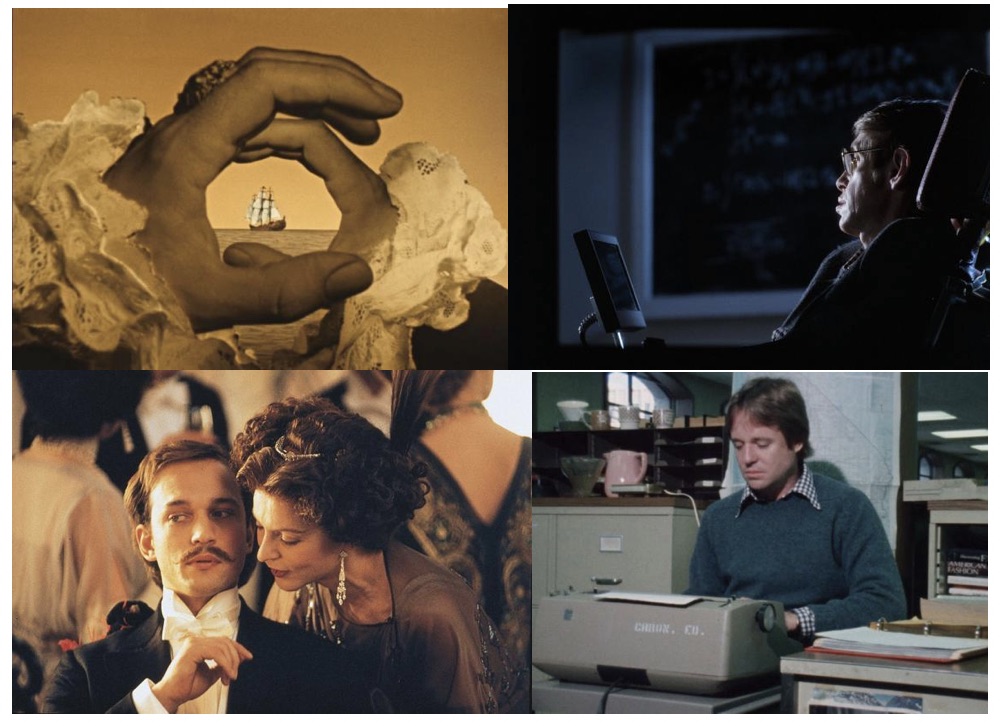 (Berkeley, CA) April 3, 2018—This spring, the University of California, Berkeley Art Museum and Pacific Film Archive (BAMPFA) returns as the exclusive film partner for the Bay Area Book Festival, one of Northern California’s largest weekend literary festivals. In conjunction with the 2018 festival, BAMPFA hosts the third annual installment of Auteur, Author, a series that celebrates the relationship between the worlds of literature and cinema—including films about and inspired by great writers. Many of the screenings include appearances by notable authors and literary scholars, as well as the filmmakers Errol Morris and San Francisco’s Jennifer M. Kroot.

Guest curated by the Pacific Film Archive’s program director emeritus Tom Luddy in conjunction with the festival’s founder and executive director Cherilyn Parsons, Auteur, Author opens on April 25 with a screening of the Cold War thriller The Manchurian Candidate, based on the novel by Richard Condon and introduced by author Greil Marcus. The film is one of several literary adaptations in the series, which also includes a screening of Time Regained in a new digital restoration; Maliglutit, an Inuktitut-language update of The Searchers relocated to the Canadian Arctic; Jesus’ Son, an adaptation of the renowned short story by Denis Johnson; and A Brief History of Time, a documentary interpretation of the iconic scientific treatise by Stephen Hawking, who passed away earlier this month. A Brief History of Time is presented in person by its Academy Award-winning director Errol Morris, joined in conversation by UC Berkeley Professor of Mathematics Edward Frenkel.

The BAMPFA series complements a packed weekend of presentations, panels, keynotes, performances, and more at the Bay Area Book Festival, which takes place in downtown Berkeley on April 28 and 29. A full schedule of festival programs and information on tickets and passes can be found at www.baybookfest.org.

Many of the screenings at BAMPFA include introductions by participants in the festival’s panel discussions. Among them are Pablo Neruda biographer Mark Eisner, who speaks on a festival panel before introducing the screening of Neruda; Edward Frenkel, who interviews Errol Morris following a conversation at the screening of A Brief History of Time; and a panel of distinguished authors discussing the work of Denis Johnson, three of whom introduce the BAMPFA screening of the Johnson adaptation Jesus’ Son. Each of these panelists appears at the festival on April 28.

A full program list for Auteur, Author follows below:

Frankenheimer’s outspoken satire, based on Richard Condon’s novel, played with America’s oversized horror of Communist infiltration while dealing on another level with the brainwashing potential of media-induced fear. Laurence Harvey and Frank Sinatra return from the Korean War after the Communists have taken them and their entire platoon to the head cleaners, and made Harvey a walking time-bomb set to assassinate the presidential nominee. Harvey’s sensitive portrayal of this much-used soldier is a sobering antidote to the Kubrick-like absurdity of the plot. The fact that the president-to-be (-murdered) is Harvey’s stepfather is only the beginning of the film’s reverberating Oedipal complex.

The screening is introduced by Greil Marcus, author of a monograph on The Manchurian Candidate published in the British Film Institute’s Film Classics series.

The whimsical Baron Münchausen mistakes a modern-day astronaut for a lost moon man and leads him on a series of miraculous adventures, riding on seahorses, battling the sultan’s armies, and romancing the beautiful Princess Bianca. This lovely, humorous version of a classic tale is like a nineteenth-century magic lantern show brought to glittering life. Master Czech animator Zeman combined cartoon and stop-motion animation, puppetry, matte paintings, and live action, creating a fantastic mechanical clockwork that anticipated the work of later animator/directors such as Terry Gilliam and Tim Burton.

The screening includes an in-person appearance by James Mockoski, a film archivist at American Zoetrope who has supervised the restorations of classic films including Apocalypse Now and The Conversation. As an independent consultant, Mockoski oversaw the restoration of The Fabulous Baron Münchausen.

A Brief History of Time

Stephen Hawking’s 1988 classic A Brief History of Time: From the Big Bang to Black Holes was written for the layperson, and Errol Morris’s documentary uses cinema to go for the heart of this outsize mind. Hawking collaborates in this, guiding us (using his speaking device) through questions like “Why do we remember the past and not the future?” He is not unaware of their poetry, we think. Morris seems equally fascinated by the family of unflappable eccentrics that spawned Hawking and his sense of wonder, and by colleagues like Roger Penrose, who theorized the death of stars while crossing the street. Hawking died on March 14, 2018.

Morris is joined in conversation at the screening by Edward Frenkel, a professor of mathematics at UC Berkeley whose latest book is Love and Math.

Raúl Ruiz achieves the seemingly impossible with this adaptation of the final volume of In Search of Lost Time. It is a film at once wholly faithful to Proust and to the distinctive vision of its director. Inventing a cinematic equivalent to the novelist’s “involuntary memory,” Ruiz creates a permeable fiction in which every image opens on another and every level of the remembrance—from Marcel’s cozy childhood memories to his struggles to recall the past—exists on the same plane. The film is a casting miracle, as the actors (leading figures of the contemporary French cinema) are perfect physical and emotional matches for Proust’s characters: Catherine Deneuve as the aging Odette, Emmanuelle Béart as Gilberte, Vincent Perez as the vain Morel, Pascal Greggory as the effete Saint-Loup, Marie-France Pisier as the braying Madame Verdurin. And John Malkovich, delivering his own French dialogue, finds a soul mate in the grandly decadent Baron de Charlus. For those who know the novel, Ruiz’s film sets off its own chain of memories and associations; for those who do not, it serves as a superb introduction to the shape and texture of the Proustian universe.

The screening is introduced by Steve Wasserman, the publisher and executive director of Heyday Books and former editor of the Los Angeles Times Book Review.

Maliglutit (Searchers) continues in the breathtaking vein of Canadian-Inuk filmmaker Zacharias Kunuk’s unforgettable Atanarjuat: The Fast Runner. Spoken entirely in Inuktitut, the film zeroes in on a smaller-scale story of good versus evil, more immediate and desperate, and rooted in the Westerns that Kunuk grew up watching. A loose remake of John Ford’s masterpiece The Searchers [based on the book by Alan Le May], Maliglutit is more a study of cruelty than of racial hatred; the kidnappers in this story are of the same tribe, but are vulgar and selfish—they don’t share food—and have been exiled. It’s 1913, and Kuanana (Benjamin Kunuk) goes out hunting caribou and returns to find his wife and daughter gone, stolen like possessions. (The kidnapping sequence is shown in a panicky frenzy of swarming furs, twisting and squirming in and out of frame.) Kuanana and his teenage son head back out into the snowy tundra by dogsled, seeking their family members and cold revenge. Like Ford, Kunuk pays vivid attention to the landscape, using lengthy takes to emphasize growing exhaustion as the Arctic ice pummels the search party. The unsettling sound design features a kind of female guttural chanting, as well as animal noises, raising a sense of harrowing dread. At first sharp and brutal, the film ultimately achieves a visceral, lyrical state.

The screening is introduced by Shari Huhndorf, a professor of Native American studies and chair of the Department of Ethnic Studies at UC Berkeley. She is the author and coeditor of a number of books including Mapping the Americas: The Transnational Politics of Contemporary Native Culture.

How many characters can one writer be? Larraín’s fictionalized portrait of the Chilean Nobel Prize–winning (1971) poet Pablo Neruda (Luis Gnecco) in the postwar era posits him as an elected senator and an enemy of the state, a people’s poet and a poseur, a hedonist and a faithful partner, and a crime novel devotee who writes his own top cop (Gael García Bernal) into the story of his cat-and-mouse escape from the authorities. “In this fiction,” someone says, “we all revolve around the protagonist.” Underneath the magical realism are brooding undertones of Chile’s future (and Neruda’s grim end) at the hands of Pinochet.

The screening is introduced by Mark Eisner, author of the biography Neruda: The Poet’s Calling and editor and translator of The Essential Neruda: Selected Poems.

“It’s a real challenge to make a film from a book you love fiercely, but Denis’s voice was our guide,” Alison Maclean said of adapting Denis Johnson’s book of stories, Jesus’ Son. “The delicacy with which this ensemble retains the essence of Johnson’s tales is a small miracle unto itself,” Betsy Sussler wrote in BOMB. “Maclean knows just when to break the rules of filmmaking—skipping back and forth in time, lifting the narrator’s voice from the book—and when to break the book’s form, creating a linear love story on which to hang a vision compelled by fracture. . . . [A] gem of a film.”

The screening includes appearances by Jane Ciabattari, a columnist for BBC Culture and Literary Hub who has contributed cultural criticism to The New York Times Book Review, NPR, The Paris Review, and many other publications; Christian Kiefer, author of The Animals, The Infinite Tides, and One Day Soon Time Will Have No Place Left to Hide and director of the low-residency MFA program at Ashland University in Ohio; and Tom Barbash, author of The Last Good Chance, Stay Up With Me, On Top of the World, and the forthcoming novel The Dakota Winter, and a writing instructor at California College of the Arts.

The Untold Tales of Armistead Maupin

“He loves the world but he does find it hilariously funny”: this is actor Ian McKellen’s description of his friend Armistead Maupin. Starting in the 1970s, Maupin was the Charles Dickens of San Francisco; his serialized Tales of the City used outrageous fictions to open the eyes of San Francisco Chronicle readers to the real city around them. It was a city of seekers, like Maupin, who had “ventur[ed] beyond our biological family to find our logical one.” Tales became six novels and a TV series. In his new memoir, The Untold Tales of Armistead Maupin, and this film we meet the funny, thoughtful author whose goal is to create characters, “gay, straight, who function lovingly with one another.”

The screening includes an in-person appearance by director Jennifer M. Kroot, whose films also include To Be Takei and It Came from Kuchar.