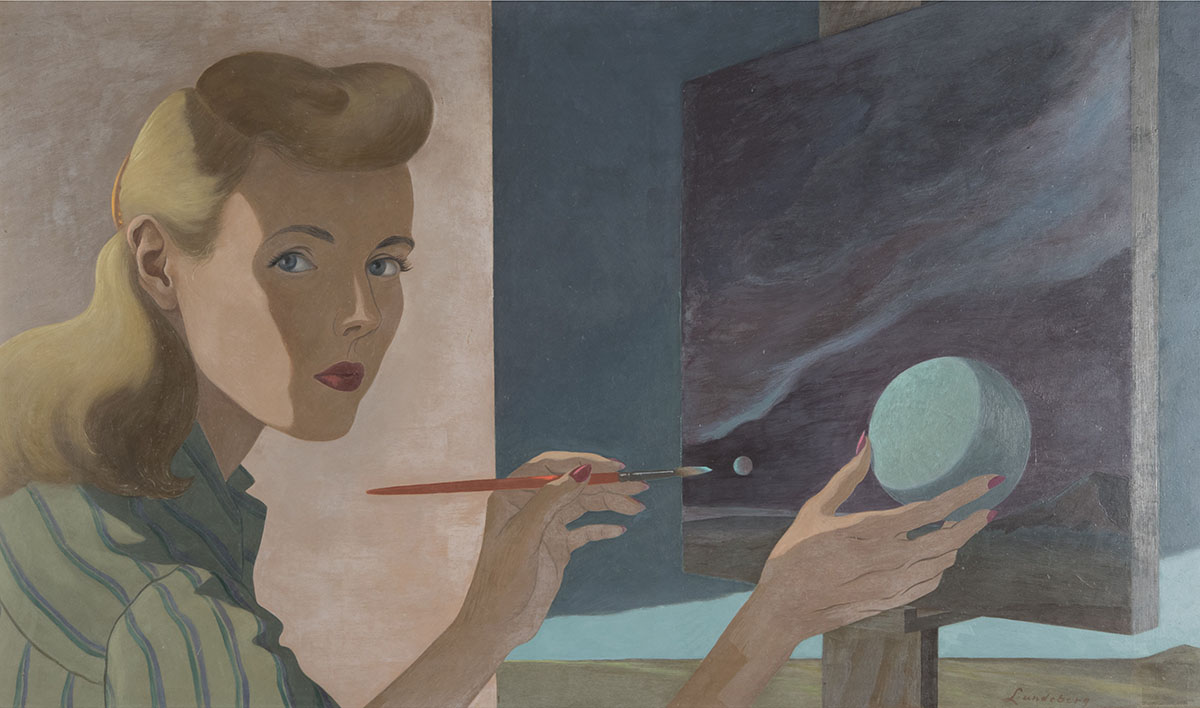 On View at the University of California, Berkeley Art Museum & Pacific

(Berkeley, CA) August 21, 2018—This fall, the University of California, Berkeley Art Museum and Pacific Film Archive (BAMPFA) presents the premiere of a nationally touring exhibition that explores the influence of scientific discovery on some of the twentieth century’s most celebrated artists. Organized by the Mead Art Museum at Amherst College, Dimensionism: Modern Art in the Age of Einstein is the first exhibition to highlight the untold story of the “Dimensionist Manifesto”—a proclamation authored by Hungarian poet Charles Sirató in 1936 and endorsed by such artistic luminaries as Alexander Calder, Marcel Duchamp, Joan Miró, László Moholy-Nagy, Sophie Taeuber-Arp, and others—which called for an artistic response to the era’s groundbreaking scientific discoveries. Featuring nearly seventy artworks by the Manifesto’s signatories and their contemporaries, the exhibition illuminates remarkable connections between the scientific and artistic revolutions that shaped the twentieth century.

Dimensionism features new scholarship on the influence of science on European and American artists of the 1930s, who were active at a time when mass media was exposing the general public to radical new developments in scientific theory. Inspired by new conceptions of time and space engendered by physics, mathematics, astronomy, and microbiology, an emerging avant-garde movement sought to expand the “dimensionality” of modern art. These artists engaged with scientific concepts to advance bold new forms of creative expression, from the fourth dimension of space-time embodied by Calder’s free-moving mobiles to new perceptions of the cosmos evoked by Noguchi’s lunar landscapes.

The exhibition illuminates creative currents that connected the Dimensionists to their artistic contemporaries in the pre- and postwar eras, many of whom were inspired by the same scientific themes that were championed by the Dimensionist movement. Some of the group’s earliest ventures included direct engagement with scientists, such as the artist László Moholy-Nagy’s correspondence with Albert Einstein. Similarly, Naum Gabo, Barbara Hepworth, and Henry Moore knew the x-ray crystallographer J.D. Bernal and were influenced by his new scientific images, which share striking similarities with works such as Moore’s Stringed Figure (1938), a highlight of the exhibition. Even the critical reception of artwork of cubist painters like Pablo Picasso, was informed in part by the new physics of quantum theory.

The scientific theories of modern physics and astronomy in particular played an important role in the development of Dimensionism, inspiring the drive for a new type of kinetic art (like Alexander Calder’s mobiles) that embodied the new vision of a dynamic universe in which nothing was static. Just as importantly, Einstein’s Theory of Relativity posited a new type of curved space, confirmed by the total eclipse of 1919, which showed the “bending” of light around the sun. The image of the eclipse became symbolic of this historic moment that altered our perception of space and time and found itself represented in many artworks of this era, including on one of Duchamp’s kinetic “Rotoreliefs,” and artwork by Joseph Cornell.

Curated by Vanja Malloy, the Mead’s curator of American art, Dimensionism brings together paintings, sculptures, prints, and photographs from private and museum collections, along with poetry and other ephemera associated with the Dimensionist movement. More than 36 artists are represented in the exhibition, including many of the Manifesto’s original signatories as well as other prominent artists—Helen Lundeberg, Barbara Hepworth, Man Ray, Isamu Noguchi, Wolfgang Paalen, Pablo Picasso, Yves Tanguy, and many others—who drew inspiration from science.

“This unprecedented exhibition invites visitors to reconsider work by some of the most important artists of the twentieth century in a fresh historical framework that emphasizes their engagement with the world of science—a powerful influence on the trajectory of modern art that has been largely overlooked until now,” said Malloy. “By illuminating this forgotten history, Dimensionism reveals that major swaths of avant-garde art can never fully be understood unless contextualized within the social and scientific upheavals that shaped them.”

An illustrated 328-page exhibition catalog, edited by Malloy, provides the first in-depth scholarship on the Dimensionist Manifesto and the relationship between modern art and science more generally. The catalog includes new essays by Malloy; Oliver A. I. Botar from the University of Manitoba; Linda Dalrymple Henderson from the University of Texas at Austin; and Gavin Parkinson from the Courtauld Institute of Art. Published and distributed by the MIT Press, the catalog is available to purchase at the Mead Art Museum and BAMPFA, and online at https://mitpress.mit.edu/books/dimensionism.

“We are delighted to partner with our friends at the Mead in premiering their exceptional exhibition here in Berkeley, where our visitors will have the opportunity to rediscover an important passage of modern art history with a truly outstanding selection of artwork—including multiple works from our own collection,” said BAMPFA Director and Chief Curator Lawrence Rinder, who is overseeing the BAMPFA presentation of Dimensionism. “As the visual arts center for one of America’s leading research universities, BAMPFA is an ideal venue to launch an exhibition that celebrates the spirit of scholarly and creative exchange between the worlds of art and science.”

Dimensionism: Modern Art in the Age of Einstein is organized by the Mead Art Museum at Amherst College and curated by Vanja Malloy, curator of American art. The exhibition is made possible with the generous support of Henry Luce Foundation, the Terra Foundation for American Art, the Hall and Kate Peterson Fund, the David W. Mesker ’53 Fund, and the Wise Fund for Fine Arts. The BAMPFA presentation is organized by Lawrence Rinder, director and chief curator, with Matthew Coleman, curatorial assistant, and made possible with lead support from Nion McEvoy and Leslie Berriman and major support from Frances Hellman and Warren Breslau and Orton Development, Inc.