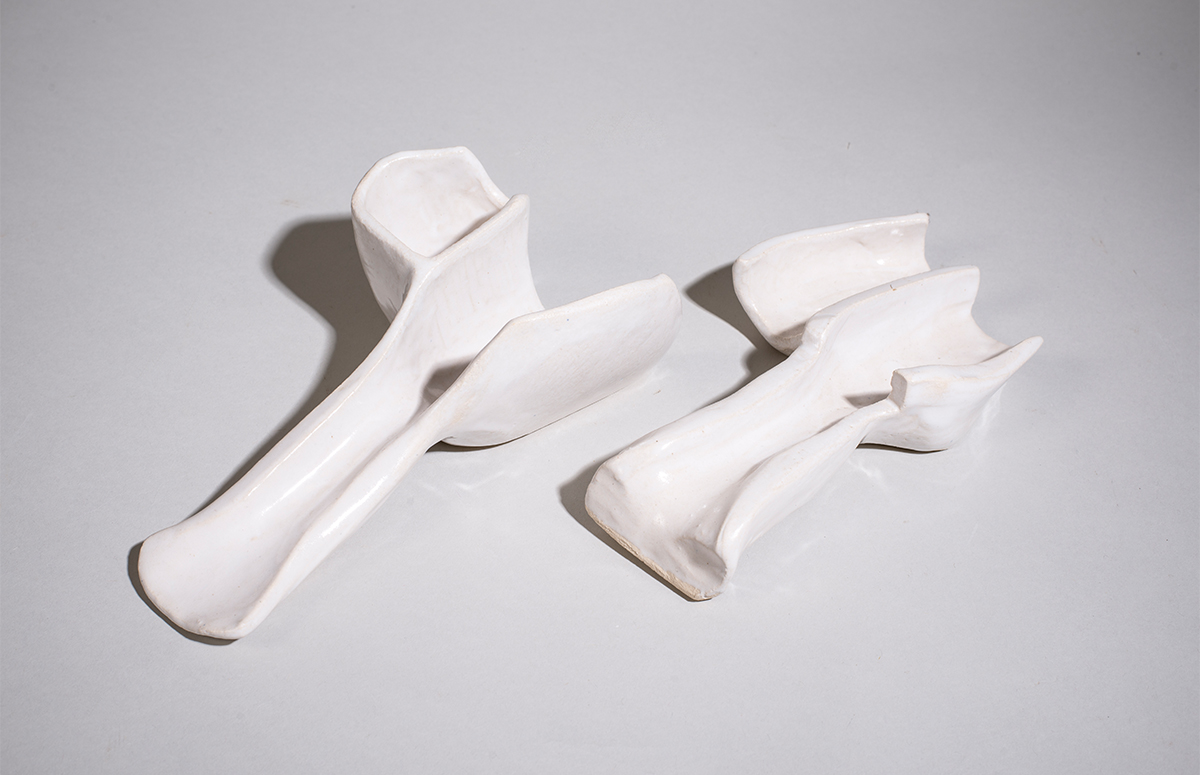 (Berkeley, CA) December 8, 2022—The influential Israeli ceramicist Rina Kimche will receive her first solo exhibition in the United States next year at the Berkeley Art Museum and Pacific Film Archive. Kimche’s eponymously titled solo exhibition at BAMPFA will feature seventeen sculptures by the 88-year-old artist, who is regarded as an important figure in the Israeli Modernist movement but has rarely exhibited her work in North America. Focusing primarily on work created in the past twenty years of the artist’s practice, Rina Kimche includes several sculptures that have never been publicly displayed until now.

Noted for the deceptive simplicity of their abstract forms, the sculptures of Rina Kimche (pronounced KIM-kuh) are typically diminutive in scale, recalling the historical forms and styles of Mediterranean clay artifacts as well as the rocky desert landscape of the artist’s native Israel. While her work is heavily influenced by Minimalist and Postminimalist artists such as Eva Hesse, Michelle Stuart, and Richard Tuttle, Kimche has also been an important force in the development of Israeli Modernism, an art movement that emerged during the 1950s and ’60s among Israeli artists who sought to assert an identity distinct from the nation’s diasporic past and rooted in the culture of the Middle East. Steeped in the imagery, forms, colors, and materials of the region, Kimche’s work is also informed by a range of international ceramic traditions, drawn in part from her years spent living in West Africa, Japan, and the United States.

The earliest work in the exhibition, Casket with Three Compartments (1975), highlights an interest in the forms of Middle Eastern archeological artifacts that has been a throughline across Kimche’s half-century practice. Its box-like shape and small size suggest an ossuary—a container for disinterred bones commonly used in the dry regions of ancient Palestine—yet the incorporation of three separate compartments alludes to the serial arrangements of Minimalist sculpture in the mode of Donald Judd’s iterative boxes. Landscape (1982), another early work, is composed of a series of semi-tubular forms that create a row of ridges and inner hollows, anticipating a growing interest in the containment of flowing water that would become a focus of Kimche’s later work—such as Fold (2015), whose deep earth-toned grooves suggest some form of ancient desert irrigation. The exhibition also includes a set of “tools” inspired by the artist’s childhood memories of her family’s farm on a kibbutz in Northern Israel, which poetically combine aspects of shovels, pitchforks, scoops, and rakes.

BAMPFA is the only museum in the United States to hold sculptures by Kimche in its permanent collection, following gifts from the artist and a bequest from Cathy Cootner. On Saturday, January 28 at 1:30 p.m., BAMPFA’s former director Lawrence Rinder, who is guest curating this exhibition, will deliver a lecture at the museum on the topic of Kimche’s influence on Israeli Modernism. The event is copresented by The Magnes Collection of Jewish Art and is included with museum admission. Additional public programs associated with Rina Kimche will be announced in the coming weeks; visit bampfa.org for the latest updates.

“Rina Kimche's art exemplifies a multicultural life experience, incorporating influences from all of the regions in which she has lived including the Middle East, West Africa, and Japan,” said Rinder. “Deceptively simple, her ceramic sculptures are rich in poetic evocations of civilization and its tragic fragility.”

“In recent years, BAMPFA has proudly highlighted the work of multiple late-career female artists whose contributions to their respective moments deserves to be better known, including Sylvia Fein, Barbara Stauffacher Solomon, Kay Sekimachi, Luchita Hurtado, and Alison Knowles among others. Our presentation of Rina Kimche’s first US exhibition advances this practice, offering our audiences a rare opportunity to discover the work of an important and underappreciated voice in Israeli modernism,” said BAMPFA’s Executive Director Julie Rodrigues Widholm. “We’re proud not only to introduce Kimche to an American audience but to be the sole museum in the United States to hold her work in our collection, where it contributes to our growing strength in ceramics.”