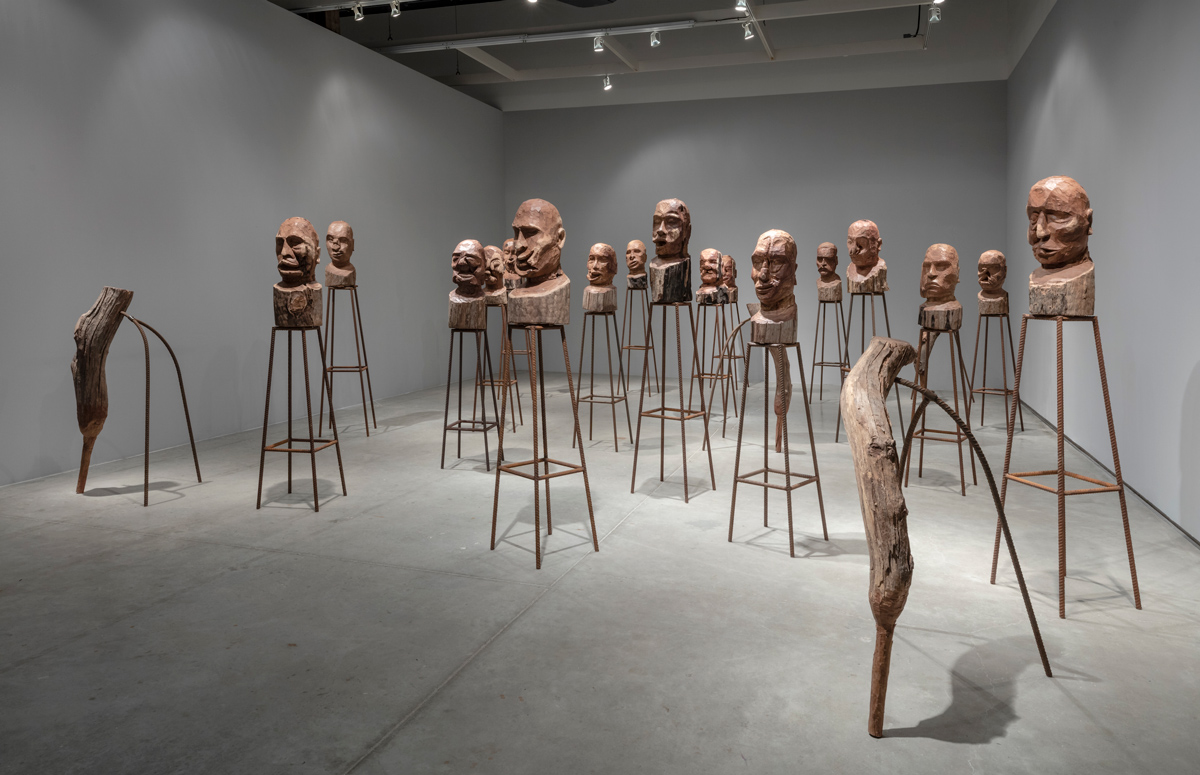 Making its West Coast premiere at BAMPFA, J’accuse is a poignant, ambitious work by Attia that explores one of his most central subjects—that of repair. The installation consists of seventeen wooden busts that are based on photographs of World War I veterans who suffered severe facial injuries and subsequently underwent plastic surgery. The sculptures are positioned opposite a projected excerpt from French director Abel Gance’s iconic antiwar film J’accuse (1938). The title of the installation references both Gance’s film and Émile Zola’s “J’accuse!” from 1898, an open letter to the president of France in defense of Alfred Dreyfus, a Jewish officer falsely imprisoned for espionage as a result of an anti-Semitic conspiracy within the French army.

J’accuse highlights longstanding themes in Attia’s practice, uniting the artist’s studies of postcolonial histories with his deep attention to the concept of repair that he has been working on for the last decade, as it relates to the trauma of war. A French-Algerian artist who lives in Algiers, Berlin, and Paris, Attia often references through his work the forces of destruction and reconfiguration that emerge during wartime—a metaphor powerfully evoked in the expressive faces of his subjects in J’accuse. The photographs that inspired these sculptures were exhibited in Attia’s installed slide show Open your eyes (2010), where they were displayed alongside African masks that had been broken or repaired. Attia, who lived in Central Africa during the 1990s, created the sculptures in J’accuse with the assistance of three Senegalese craftsmen, and he has cited African mask-making traditions as an influence on the work.

The juxtaposition of the sculptures in J’accuse with the excerpt from Gance’s eponymous film underscores the installation’s antiwar themes. The passage chosen for the exhibition features onscreen appearances by actual wounded veterans of the Battle of Verdun—known in French as les gueules cassées (“broken faces”)—who were cast by Gance as ghosts summoned by the film’s protagonist to warn the living about the horrors of war. In Attia’s installation, the mutilated faces of his subjects are directed toward the disfigured soldiers onscreen, a double mirroring effect that invites viewers to reflect on the complex connections between art, war, and historical witness.

“We’re thrilled to mount Kader Attia’s first solo exhibition on the West Coast with this presentation of J’accuse, a work that applies Kader’s characteristic thoughtfulness and sensitivity to the effects of colonialism and the atrocities of war,” said Apsara DiQuinzio, BAMPFA’s senior curator of modern and contemporary art and Phyllis C. Wattis MATRIX Curator. “At a time when conflict and dislocation are once again reshaping our world, his work provides a vital perspective on the historical and moral dimensions of global conflict.”

“For more than two decades, Kader Attia has focused on the materiality of wounds and scars in the aftermath of colonization, migration, violence, and loss, and on the immaterial rifts—expressed as madness, possession, and phantoms demanding to be heard—that haunt the lives of individuals and collectivities,” said Stefania Pandolfo, professor of Anthropology at UC Berkeley, who co-curated the exhibition with DiQuinzio. “His artistic practice seeks to rebuild these broken links, inviting the viewer to engage in a relationship with the lost and the unknown.”

Attia will join Pandolfo in conversation on Wednesday, September 18 at 6 p.m. to discuss Attia’s approach to the concept of repair and healing after physical and psychological injury, particularly in a postcolonial context. In addition, a workshop entitled, Tarrying with the Irreparable will take place on Friday, September 20 at UC Berkeley, with the artist and in association with the The Townsend Center for the Humanities, The International Consortium of Critical Theory, The Program in Critical Theory at UC Berkeley, the Arts Research Center at UC Berkeley, The Center for Middle Eastern Studies, The Anthropology Department, and The Art History Department; the program will reflect on the colonial and postcolonial, the transmission of culture, possession, the ghostly, and repair as an art of tarrying with the irreparable. Additional information about the workshop will be announced soon.

Kader Attia was born in Dugny, France, in 1970, and grew up between Garges-lès-Gonesse, in the Parisian suburbs, and Algeria, where his family is originally from. He received degrees from the École supérieure des arts appliqués Duperré, Paris, in 1993; the Escola Massana Centre d’Art i Disseny, Barcelona, in 1994; and École nationale supérieure des Arts Décoratifs, Paris, in 1998. Attia’s work has been featured in solo exhibitions at major institutions such as the Hayward Gallery, London; the Museum of Contemporary Art Australia, Sydney; the Power Plant, Toronto; the Centre Pompidou, Paris; the Beirut Art Center; and the Institute of Contemporary Art, Boston. His work has been included in group exhibitions at the Metropolitan Museum of Art, New York; Kunsthalle Wien, Vienna; the Museum of Modern Art, New York; the 12th Gwangju Biennial in South Korea; Manifesta 12 in Palermo, Italy; the 57th Venice Biennale; and dOCUMENTA(13) in Kassel, Germany. Attia has participated in residencies at Artpace San Antonio and the Banff Centre for Arts and Creativity. In 2016 he received the Prix Marcel Duchamp, and in 2017 the Joan Miró Prize and the Yanghyun Art Prize. He is the founder of La Colonie in Paris, a space for discussion and exchange around concepts and practices of decolonization. Attia lives and works in Berlin, Paris, and Algiers, and is represented by Lehmann Maupin, New York; Galerie Nagel Draxler, Berlin; and Regen Projects, Los Angeles.

Kader Attia / MATRIX 274 is organized by Apsara DiQuinzio, senior curator of modern and contemporary art and Phyllis C. Wattis MATRIX Curator, and Stefania Pandolfo, professor of medical anthropology and sociocultural anthropology at UC Berkeley. The MATRIX Program is made possible by a generous endowment gift from Phyllis C. Wattis and the continued support of the BAMPFA Trustees.