BAMPFA Thrives in its First Few Months in its New Downtown Berkeley Home; Looks Forward to the First Summer of Programming at its New Location 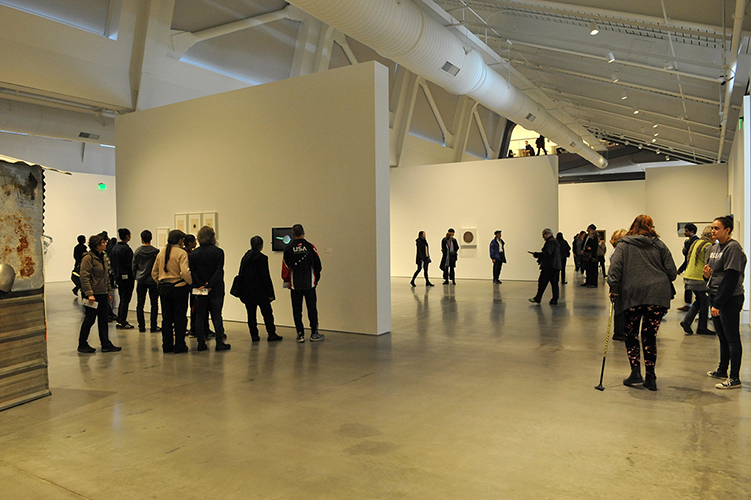 The Berkeley Art Museum and Pacific Film Archive (BAMPFA) Thrives in its First Few Months in its New Downtown Berkeley Home; Looks Forward to the First Summer of Programming at its New Location

(Berkeley, CA) April 28, 2016—The University of California, Berkeley Art Museum and Pacific Film Archive (BAMPFA) has enjoyed a surge in attendance since opening the doors to its new downtown Berkeley location. The general public got its first peek inside the new building, designed by the world renowned design firm Diller Scofidio + Renfro, at a free Community Day on January 31, 2016. The event, which featured a ceremonial ribbon cutting and performances throughout the day, drew over 12,500 visitors. In the two and half months since the opening, BAMPFA has issued approximately 55,000 gallery passes and more than 13,000 film tickets. BAMPFA averaged a combined 75,000 annual attendance at its prior galleries and theater locations in recent years. Membership, meanwhile, has doubled since BAMPFA moved downtown, up from approximately 2,500 to 5,000. The BAMPFA Store has done brisk business, already matching in sales what the store had earned in its last eight months of operation at the previous address.

There is enormous interest in BAMPFA’s intriguing architecture. Diller Scofidio + Renfro’s design incorporates a 1939 Art Deco-style former University of California printing plant with a bold stainless-steel clad structure. On the occasion of the opening, San Francisco Chronicle urban design critic John King commented, “[BAMPFA] wants to be a mind-bending twist of the old and the new, preservation and provocation . . . , In fact it’s something better: a well-crafted, multilayered museum that manages to feel intimate and expansive at once.”

Architecture of Life
BAMPFA’s ambitious inaugural exhibition, Architecture of Life, organized by Director Lawrence Rinder, features an international selection of over 280 artworks, as well as architecture and scientific illustration from the past two thousand years. It explores the ways that architecture—as concept, metaphor, and practice—illuminates aspects of life experience: the nature of the self and psyche, the fundamental structures of reality, and the power of the imagination to reshape our world. Like the museum’s architecture, the exhibition has drawn a wellspring of accolades from the general public and critics alike. San Francisco Chronicle art critic Charles Desmarais, praises the presentation as “adventuresome and expansive”, while Julie Lasky, describes it as “absorbing” in Blouin Artinfo.

Improved Accessibility
BAMPFA is more accessible than ever. Situated where the bustling downtown Berkeley Arts District meets the west entrance to the UC Berkeley campus, and just a block from the downtown Berkeley BART station, it’s estimated that 10,000 pedestrians and commuters use the busy Center Street corridor each day. To accommodate as many schedules as possible, the museum expanded its hours from 11 a.m. to 9 p.m., Wednesday through Friday. The longer hours are a particular boon for evening filmgoers, who can peruse the galleries at no additional cost with the purchase of a film ticket. And BAMPFA has made visiting the museum more economically feasible for families: all children under eighteen plus one adult companion enjoy free gallery admission.

Summer Art & Film Programming
After the close of Architecture of Life on May 29, 2016, BAMPFA will begin to unfold a series of exhibitions over the summer months that spotlight particular aspects of its encyclopedic collection of over 19,000 works. Summer Trees Casting Shade: Chinese Painting at Berkeley, the First Fifty Years (opens July 6) showcases BAMPFA’s world-renowned collection of Chinese paintings. Berkeley Eye: Perspectives on the Collection (opens July 13) groups works into themes—Bible Stories; Nature; Human Nature; Space, Time, Energy; Black, White, Gray; Barriers and Walls; Connection and Change; and Into the Light—to offer fresh, uniquely Berkeley perspectives on the collection. This Just In (opens July 6) presents recent acquisitions, including paintings by San Francisco artist Jess, photographs by Todd Hido and Shirin Neshat, and drawings by Hedda Sterne and Charles Gaines. Sojourner Truth, Photography, and the Fight Against Slavery (opens July 27) draws from a new addition to the BAMPFA collection, a collection of photographic carte de visites produced by the former slave and abolitionist. Buddhist Art from the Roof of the World includes devotional art from India, Tibet, and Nepal dating from the second to the nineteenth century. And BAMPFA’s MATRIX Program will feature an exhibition of paintings, sculptures, and photographs by Stockholm-based Cecilia Edefalk (opens June 29).

BAMPFA’s Barbro Osher Theater will be the place to be this summer to discover the best in international, classic, independent, and experimental cinema. Enter a world of fedoras and ball gowns, murderers and saps, doomed love and forbidden with Mexican Film Noir (opens May 7). The Films of Seijun Suzuki (opens May 7) is a career-spanning retrospective of the Japanese director’s wide-ranging works, which include B-movie potboilers and beguiling metaphysical mysteries. Films adapted from books in Auteur, Author coincide with the second annual Berkeley Book Festival, and will feature in-person literary guests, including Katrina Dodson, Jonathan Lethem, and Dana Siotta, among others. Wim Wenders: Portraits Along the Road (opens May 13) features recently restored films of inarguably one of the most influential filmmakers of the past half-century. And the Early Music Film Festival (opens May 26) will bring together films and concerts celebrating Baroque music.

Architecture
BAMPFA selected world-renowned interdisciplinary design firm Diller Scofidio + Renfro for the project because of its unique ability to connect institutions to wider urban and public contexts and its proven success in merging adaptive reuse of historic structures with dramatic new design in major urban cultural initiatives. DS+R’s design supports BAMPFA’s mission and enhances its ability to provide the community with exceptional art and film experiences. “The new home for BAMPFA leverages its location between downtown Berkeley and the UC campus by providing unprecedented visual and physical access to its programs for both visitors and casual passersby,” states Charles Renfro, partner at DS+R. “BAMPFA will become a new social and cultural hub for the entire region.”

“The design merges the old and new to create a permeable interface between the institution and the public,” Renfro continues. “The supple body of the new structure, draped between the original 1930s orthogonal buildings and snagged on their sharp corners, creates a dramatic public spine that begins as a cantilevered cafe marking the building’s entrance, and culminates in an indoor theater on the other end of the site. The sculptural form of the theater volume reinterprets the 1930s Art Deco style of the press building in a contemporary language of ruled surfaces and precision-formed stainless steel.” Meanwhile the original north-facing sawtooth roof of the printing plant is retained, providing indirect natural light to the art galleries within. At the Addison Street end, the new structure is integrated with a large outdoor LED screen and plaza for public screenings. The building totals 83,000 square feet, with 25,000 square feet of gallery space. Visitors can enjoy two film theaters (232 and 33 seats respectively), a performance forum, four study centers for art and film, a reading room, an art-making lab, a cafe, and an outdoor LED screen and viewing plaza. The versatile exhibition galleries accommodate the museum’s encyclopedic range of artwork. The Barbro Osher Theater is equipped with state-of-the-art projection for all popular formats—including DCP, 35mm, and 16mm—highly sophisticated acoustics, and a world-class sound system from Meyer Sound.

Building Project Background
A 1997 seismic survey determined that Woo Hon Fai Hall, BAMPFA’s former building, designed by architect Mario Ciampi (1907–2006), does not comply with today’s earthquake safety standards. Upgrading the building to code would have significantly altered the gallery spaces, drastically limiting the institution’s ability to present exhibitions. Furthermore, BAMPFA’s world-renowned film program, which had been housed in a theater in the Ciampi building until 1999, was moved off-site to a nearby annex due to seismic concerns. To address these issues, UC Berkeley and BAMPFA embarked on a campaign to create a new facility that would again house BAMPFA’s art and film programming under one roof. The $112 million project has been funded through a philanthropic capital campaign and private sources. BAMPFA’s public programming at 2626 Bancroft Way concluded on December 21, 2014. UC Berkeley will determine the future use of Woo Hon Fai Hall.