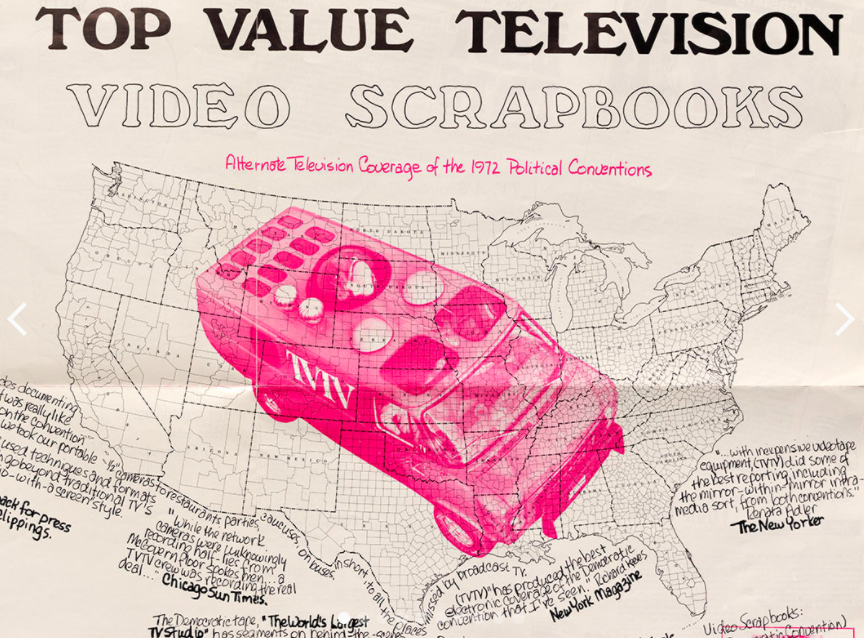 (Berkeley, CA) August 13, 2020—The UC Berkeley Art Museum and Pacific Film Archive (BAMPFA) has digitized a massive archive of documentary footage from TopValue Television (TVTV),the iconic team of self-described “guerrilla television” makers who were a major force in the counterculture movement of the 1970s. A Bay Area–based collective of artists and activists, TVTV became widely known for its provocative and irreverent public access broadcasts, which captured the political ferment of the seventies from a unique perspective—most notably with its on-the-ground reports from the tumultuous Democratic and Republican National Conventions of 1972. With the support of a grant from the National Endowment for the Humanities (NEH), BAMPFA has made accessible hundreds of hours of TVTV footage on a newly launched website that also includes new interviews with the group’s principal members.

Founded by “video freaks” from around the country who descended on the Bay Area in 1972, TVTV was conceived as a radical alternative to traditional public access broadcasting, bringing a countercultural perspective to the political reporting of the 1970s. Inspired by the “gonzo journalism” of writers like Hunter S. Thompson and Tom Wolfe, TVTV reporters sought to insert themselves as both firsthand observers and active participants in the social movements of the era. Drawing on the experience of the Bay Area’s burgeoning experimental filmmaking scene, the group was among the first to harness the potential of handheld video cameras to report on politics in real time, allowing them to capture the decade’s social tumult with a level of spontaneity that traditional broadcasters could not possibly match. TVTV’s broadcasts included memorably candid appearances by an eclectic range of 1970s personalities, including political figures like Willie Brown Jr., Ron Dellums, Ralph Nader, and Tricia Nixon; cultural icons like John Belushi, Allen Ginsberg, Christopher Guest, Shirley MacLaine, Bill Murray, and Gloria Steinem; and mainstream journalists like Walter Cronkite and Dan Rather.

TVTV’s archives have long been part of BAMPFA’s film and video collection, but most of this physically fragile footage has been inaccessible until now. In 2018, BAMPFA received a $220,537 grant from the NEH to restore and digitize 437 analog videos and original papers from this collection. For the first time, the public can now access thousands of pages of sketches, snapshots, and letters from the group’s reporting, along with hundreds of hours of outtakes and unedited interviews that have never been aired before—such as an interview with the late John Lewis by the journalist Maureen Orth. In addition, the NEH grant has supported original video interviews with several of TVTV’s founding members and original essays by specialists on video art and media archives. These materials are highlighted on a newly launched interpretive web portal, guerrillatv.bampfa.berkeley.edu.

Among the highlights of the digitized footage are two of TVTV’s most celebrated projects: The World’s Largest TV Studio, a documentary report from the 1972 Democratic National Convention, and Four More Years, its companion piece from that year’s Republican convention. Available to view on the eve of the 2020 conventions, these fascinating, often anarchic reports from the presidential race between Richard Nixon and George McGovern—which feature raucous protests, colorful stunts, and memorably unscripted interviews—provide a timely reminder of the enduring absurdity at the heart of American politics. On October 21, 2020, BAMPFA will host a virtual screening of Four More Years, accompanied by a live conversation with TVTV members, as part of the museum’s Out of the Vault series. A trailer of this footage can be viewed at https://bit.ly/3k9AAOG.

Active between 1972 and 1977, TVTV encompassed dozens of contributors from the American counterculture, including several core members who went on to prominent careers in Hollywood, academia, and the arts. Some of the group’s most notable alumni include Michael Shamberg, who later produced The Big Chill, Erin Brockovich, and Pulp Fiction; Allen Rucker, an acclaimed activist and author whose book The Sopranos Family Cookbook became a New York Times best seller; Megan Williams, an Oscar-nominated documentarian who teaches at the University of Southern California; and Chip Lord, Hudson Marquez, and Doug Michels, who cofounded the celebrated avant-garde art collective Ant Farm.

“The archives of TVTV are among the unsung jewels of BAMPFA’s film and video collection, a vivid time capsule of a watershed moment in the history of alternative media that was born right here in the Bay Area,” said Michael Campos-Quinn, director of library special projects at BAMPFA’s Film Library and Study Center. “We’re deeply grateful to the NEH for helping us make these materials available to a wider audience for the first time, in a restored and digitized form that will become an incredible resource for scholars and the general public alike.”

Saving Top Value Television: Alternative Documentation of American Cultural History and Politics has been made possible in part by a major grant from the National Endowment for the Humanities.