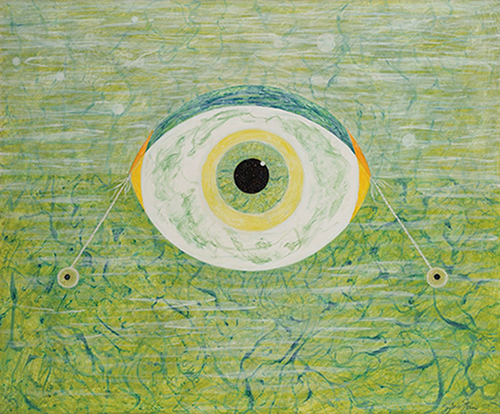 (Berkeley, CA) June 22, 2016 — The University of California, Berkeley Art Museum and Pacific Film Archive (BAMPFA) presents Berkeley Eye: Perspectives on the Collection, on view July 13 through December 11, 2016. Celebrating BAMPFA’s recent arrival in downtown Berkeley, Berkeley Eye showcases the dynamic breadth and magnitude of its collection. The scope of the BAMPFA collection has always been broad, including works dating back to the Renaissance in the West and to the Neolithic period in China. By exhibiting these works, BAMPFA aims to provide new perspectives both onto worlds beyond Berkeley and into the interior worlds of individual viewers. Organized by BAMPFA Director Emeritus Jacquelynn Baas, Berkeley Eye focuses on art that activates the senses to stimulate the sixth sense—the mind. Approximately 150 exceptional works of art are presented in eight thematic groupings, including Bible Stories; Nature; Human Nature; Barriers & Walls; Connection & Change; Space, Time, Energy; Black, White, Gray; and Into the Light.

Bible Stories presents works from a range of time periods in an order corresponding with Biblical narrative. Different versions of similar subjects provide occasions for lessons in looking, and for reflection on the functions of art. The section includes works by Rembrandt von Rijn, Peter Paul Rubens, and James Ensor, among others.

Rarely do artists present nature in a “natural” state. Instead the emphasis is often on nature as inspiration and as a source of energy, health, and connection, or as modified by humans for better or for worse. Nature features prime examples by artists such as Joan Brown, Paul Cézanne, Richard Diebenkorn, and Théodore Rousseau. Human Nature, meanwhile, focuses inward, on the human condition. This section provides visual stimulation for self-examination through the work of artists such as Albrecht Dürer, Francisco Goya, William Hogarth, Paul Gauguin, and Philip Guston.

Featuring works by Bruce Conner, René Magritte, and Lee Mullican, among others, the Space, Time, Energy section features sculpture, kinetic art, collage, and other art objects that stimulate and mobilize our bodies to create transformative aesthetic experiences. In contrast, the works featured in Black, White, Gray emphasize art’s relationship with the body through a quiet, yet assertive, presence. Presenting Minimal art from around 1960 to the present, it features works by Dan Flavin, Eva Hesse, Sol LeWitt, Ad Reinhardt, and others.

As populations become more dispersed and refugees multiply, barriers proliferate as well—obstacles that artists are challenged to depict, transgress, and transform. Also significant are the self-destructive, invisible walls we create for ourselves—the ones most vulnerable to artistic transformation. The Barriers & Walls section features several extraordinary artistic examples of external and internal obstructions that segment our world, separating us from ourselves and from each other.  Included here are works by artists such as James McNeill Whistler, Dorothea Lange, and Richard Serra.

Connection & Change, featuring iconic works by Louise Bourgeois, Jay DeFeo, David Ireland, seventeenth-century painter Zhou Zun, and others, showcases examples of artistic transformation—experiences that can take place in the mind of the viewer as well as that of the artist. The final section, Into the Light, showcases art that exemplifies the ecstasy of creation in the form of artworks by John Baldessari, Robert Irwin, Jackson Pollock, and Mark Rothko, among others.

Drawing from the breadth of BAMPFA’s varied collection, Berkeley Eye exemplifies BAMPFA’s commitment to presenting art in ways that both challenge and inspire viewers.

The Bureau of Linguistical Reality
Sundays, August 7 & 14, 12–5 p.m.
A participatory artwork that responds to a collective loss-for-words to describe the changing world around us, focusing on language in Berkeley Eye: Perspectives on the Collection.
Included with admission