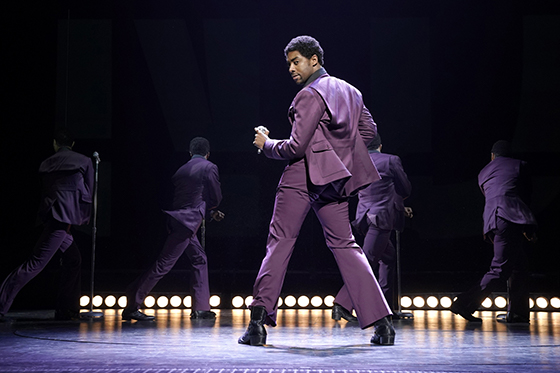 November 5 event is free and open to the public

November 1, 2017—Berkeley Repertory Theatre and the UC Berkeley Art Museum and Pacific Film Archive (BAMPFA) today announced the first ever live simulcast of a Berkeley Rep performance on BAMPFA’s outdoor screen. The free presentation will feature the final performance of Berkeley Rep’s hit musical Ain’t Too Proud — The Life and Times of the Temptations on Sunday November 5 at 7pm.  The show, originally scheduled for a limited run, was extended an additional four weeks to meet demand, and has become the highest grossing show in the Theatre’s 50-year history.

“For those who were unable to attend the show during its sold-out run, and for those who want to experience it again, we thought this would be a wonderful way to show support and say thank you to the community for making Ain’t Too Proud such a success,” says Managing Director Susan Medak.

“We’re thrilled to partner with our friends at Berkeley Rep on broadcasting the closing night of this remarkable musical, and to invite our community to experience an evening of world-class theatre under the stars,” says BAMPFA Director and Chief Curator Lawrence Rinder. “This free public event will be a magnificent send-off to one of the most beloved and successful stage musicals ever produced in Berkeley.”

BAMPFA’s outdoor screen is located at the corner of Addison and Oxford Streets. Members of the public are invited to bring their own seating and refreshments (no alcohol is permitted). This event will take place rain or shine. Use of public transportation is encouraged, as the following streets will be closed: Addison Street between Shattuck Avenue and Oxford Streets, and the southbound lanes of Oxford Street, between University Avenue and Center Street.

Ain’t Too Proud is an electrifying new musical about the life and times of The Temptations, the greatest R&B group of all time (Billboard Magazine 2017). They were five young guys on the streets of Detroit when they were discovered by Berry Gordy, who signed them to his legendary new label. After 24 attempts, they finally had a hit and the rest is history—how they met, how they rose, the groundbreaking heights they hit, and how personal and political conflicts threatened to tear the group apart as the nation fell into civil unrest. Kennedy Prize-winning playwright Dominique Morisseau, Olivier Award-winning choreographer Sergio Trujillo, and two-time Tony Award-winning director Des McAnuff bring you this thrilling story of brotherhood, family, loyalty, and betrayal. Iconic hits like “My Girl,” “Just My Imagination,” and “Papa Was a Rolling Stone” and the signature dance moves that made the “Classic Five” Temptations part of our cultural history forever.

For the 2017-18 season Berkeley Rep recognizes the generosity of its season sponsors: BART, Peet’s Coffee, and Wells Fargo. Ain’t Too Proud — The Life and Times of The Temptations is also made possible by the support of individual season sponsors Michael and Sue Steinberg, executive sponsors Jean and Michael Strunsky and The Ira and Leonore S. Gershwin Philanthropic Fund, and show sponsor Mechanics Bank Wealth Management.

Berkeley Repertory Theatre has grown from a storefront stage to an international leader in innovative theatre. Known for its core values of imagination and excellence, as well as its educated and adventurous audience, the nonprofit has provided a welcoming home for emerging and established artists since 1968. In four decades, four million people have enjoyed nearly 400 shows at Berkeley Rep. These shows have gone on to win five Tony Awards, seven Obie Awards, nine Drama Desk Awards, one Grammy Award, and many other honors. In recognition of its place on the national stage, Berkeley Rep received the Tony Award for Outstanding Regional Theatre in 1997. Its bustling facilities – which include the 400-seat Peet’s Theatre, the 600-seat Roda Theatre, the Berkeley Rep School of Theatre, and a spacious campus in West Berkeley – are helping revitalize a renowned city. Learn more atberkeleyrep.org

An internationally recognized arts institution with deep roots in the Bay Area, the University of California, Berkeley Art Museum and Pacific Film Archive (BAMPFA) is a forum for cultural experiences that transform individuals and advance the local, national, and global discourse on art and film. BAMPFA is UC Berkeley’s premier visual arts venue, presenting more than 450 film screenings, scores of public programs, and up to twenty exhibitions annually. With its vibrant and eclectic programming, BAMPFA inspires the imagination and ignites critical dialogue through art, film, and other forms of creative expression. Learn more at bampfa.org.