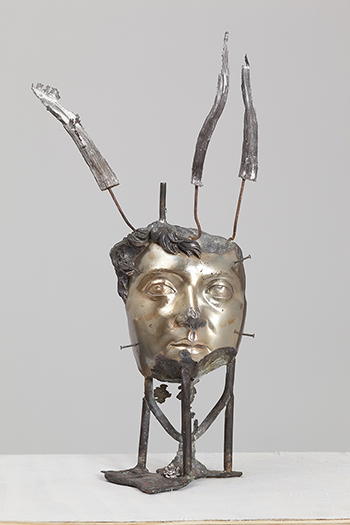 Berkeley, CA) June 16, 2016—The University of California, Berkeley Art Museum and Pacific Film Archive (BAMPFA) presents Cecilia Edefalk/MATRIX 261. The Stockholm-based artist Cecilia Edefalk’s work explores historical memory, fluctuations of time, and the symbolic significance of light. Her paintings, photographs, watercolors, and sculptures reveal an intuitive and reflective approach to making art. Edefalk’s works typically originate from a single motif—whether it be the crane fly that she discovers on her kitchen window, or a transfixing Roman sculpture she encounters in a museum—that she then represents repeatedly in various forms. The work selected for MATRIX 261 focuses on Edefalk’s decades-long engagement with the natural environment.

In recent years Edefalk has been documenting a dandelion-filled meadow near her home in various moments of light and states of bloom. One large photograph in the exhibition shows part of the field illuminated by resplendent, filtered light that turns the bulbs of the flowers into glowing orbs. Another large-scale photograph shows a hand delicately holding a perfect, spherical seed head before the wind carries the seeds away. Also on display are three small paintings which Edefalk produced in thin washes of black-and-white tempera, each revealing the meadow in different sunlit states, much as an Impressionist painter might have done in the nineteenth century.

In the late 1970s Edefalk set out on a three-year journey across Europe with a botanist friend to document and draw coastal wildflowers they encountered in areas of historical significance in England, Italy, Spain, and Portugal. The flowers and plants she captured in watercolor act as her lens onto these ancient landscapes. Edefalk originally made 160 of these works to comprise a botanical book on Mediterranean flora, which was never published; a selection of twenty of these appear in the exhibition. Birch trees, common in Sweden, are another subject that has inspired over the last several years. Edefalk’s interest in the tree originated from a traumatic moment when the artist witnessed the felling of a beloved Weeping Birch on her neighborhood block. She recovered bark, branches, and leaves from the site and transformed them into dozens of cast bronze sculptures to memorialize the tree.

Other paintings, sculptures, and photographs displayed in the exhibition point to her interest in historical sculpture, in particular a Roman marble mask of Marcus Aurelius that she encountered in the Malmö Konstmuseum, which became the foundation for a large, growing body of work. This spawned the series of paintings To view the painting from within (2002), which depicts Aurelius set against a pale blue background. The perspective from which Edefalk painted the sculpture corresponds with the phase of the moon of the day on which it was painted. A related series of photographs, To view the painting from outside, similarly shows the artist’s eye traveling around the bust with the paintings behind, again capturing many different sitelines. Edefalk’s exploration of the Aurelius portrait continues in another series of bronze sculptures that combine the visage with leaves and pieces of tree bark. In each work, she captures the evanescence of subjects that often exude a mystical and fragile quality marked by time and space.

MATRIX 261 is the artist’s first solo exhibition in a US museum in a decade, and her first ever on the West Coast.

Support
Cecilia Edefalk / MATRIX 261 is organized by Apsara DiQuinzio, curator of modern and contemporary art and Phyllis C. Wattis MATRIX Curator. The MATRIX Program is made possible by a generous endowment gift from Phyllis C. Wattis and the continued support of the BAMPFA Trustees.