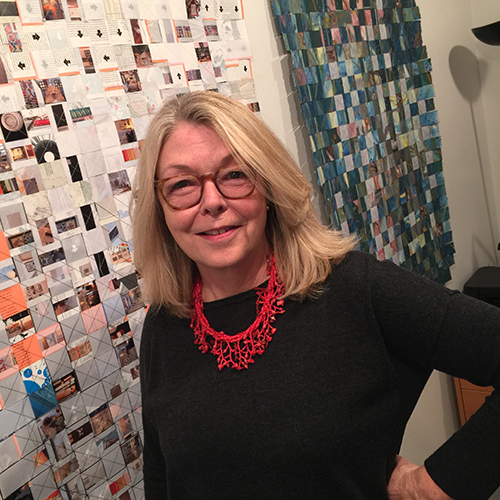 May 25, 2016, Berkeley, CA—The Berkeley Art Museum and Pacific Film Archive (BAMPFA) announced that longtime BAMPFA curator Lucinda Barnes will retire on June 29, 2016. Barnes joined the BAMPFA curatorial staff in 2001, and for the past twelve years has served as the museum’s Chief Curator and Director of Programs and Collections. In this role, she has supervised the full curatorial division—art, film, collections, and libraries. Her tenure has included several major collection, development, management, and conservation initiatives, and Barnes has been central to facilitating the addition of many important works to BAMPFA’s encyclopedic holdings of artworks and films. In recent years, her work has also included overseeing the complex logistics of moving BAMPFA’s collections and study centers into its new home in downtown Berkeley.

“The past fifteen years at BAMPFA have been extraordinary for me—professionally and personally—inspiring, exciting, and gratifying. Above all, most important to me at BAMPFA has been the extraordinary degree of creative imagination and collegial collaboration across the institution. BAMPFA will always be my benchmark for excellence, creativity, and relevance. The BAMPFA staff is among the most talented and dedicated with whom I have had the pleasure and honor to work, and I will always hold the BAMPFA program and family near and dear to my heart.”

“Lucinda has truly been at the heart of our institution for the past fifteen years,” adds Director Lawrence Rinder. “Her contributions have been vast and I can honestly say we couldn’t have made it through our recent transition to our new building without her steady leadership and vision. I have relied on Lucinda for insight and counsel at every turn."

Barnes has curated and co-curated over forty exhibitions at BAMPFA, including Measure of Time (2006), American Wonder: Folk Art from the Collection (2014), Human/Nature: Artists Respond to a Changing Planet (2009), and Indeterminate Stillness: Looking at Whistler (2010). Barnes has also served as curator-in-charge of major exhibitions that have traveled to Berkeley, such as Drawn by the Brush: Oil Sketches by Peter Paul Rubens (2005), James Castle: A Retrospective (2010), What’s It All Mean? William T. Wiley in Retrospect (2010), and Kurt Schwitters: Color and Collage (2011).

Barnes has also earned a reputation as one of the preeminent experts on the Abstract Expressionist painter Hans Hofmann, whose gift of forty-five of his iconic paintings to UC Berkeley in became the impetus for building an art museum on campus. Barnes has curated several thematic Hofmann shows, including the upcoming exhibitions Push and Pull: Hans Hofmann (August 31 to December 11, 2016) at BAMPFA, and Creation in Form and Color: Hans Hofmann, which will open at the Kunsthalle Bielefeld in Germany (November 5, 2016 to March 19, 2017) and will tour to other European venues.

Prior to coming to Berkeley, Barnes was executive director of the Boise Art Museum, Idaho. She has also served as curator of collections at the Museum of Contemporary Art in Chicago, curator of modern and contemporary art at the Allen Memorial Art Museum at Oberlin College, and has held senior curatorial posts at the Newport Harbor Art Museum (now the Orange County Museum of Art) and the University Art Museum, California State University Long Beach. She has taught at a number of colleges and universities, and in 2008–9 served as a UC Berkeley Townsend Center for the Humanities Fellow.

ABOUT BAMPFA
Internationally recognized for its art and film programming, the UC Berkeley Art Museum and Pacific Film Archive (BAMPFA) is a platform for cultural experiences that transform individuals, engage communities, and advance the local, national, and global discourse on art and film. Founded in 1963, BAMPFAis UC Berkeley’s primary visual arts venue with its screenings of some 450 films and presentations of up to twenty exhibitions annually. BAMPFA’s mission is to inspire the imagination and ignite critical dialogue through art and film.