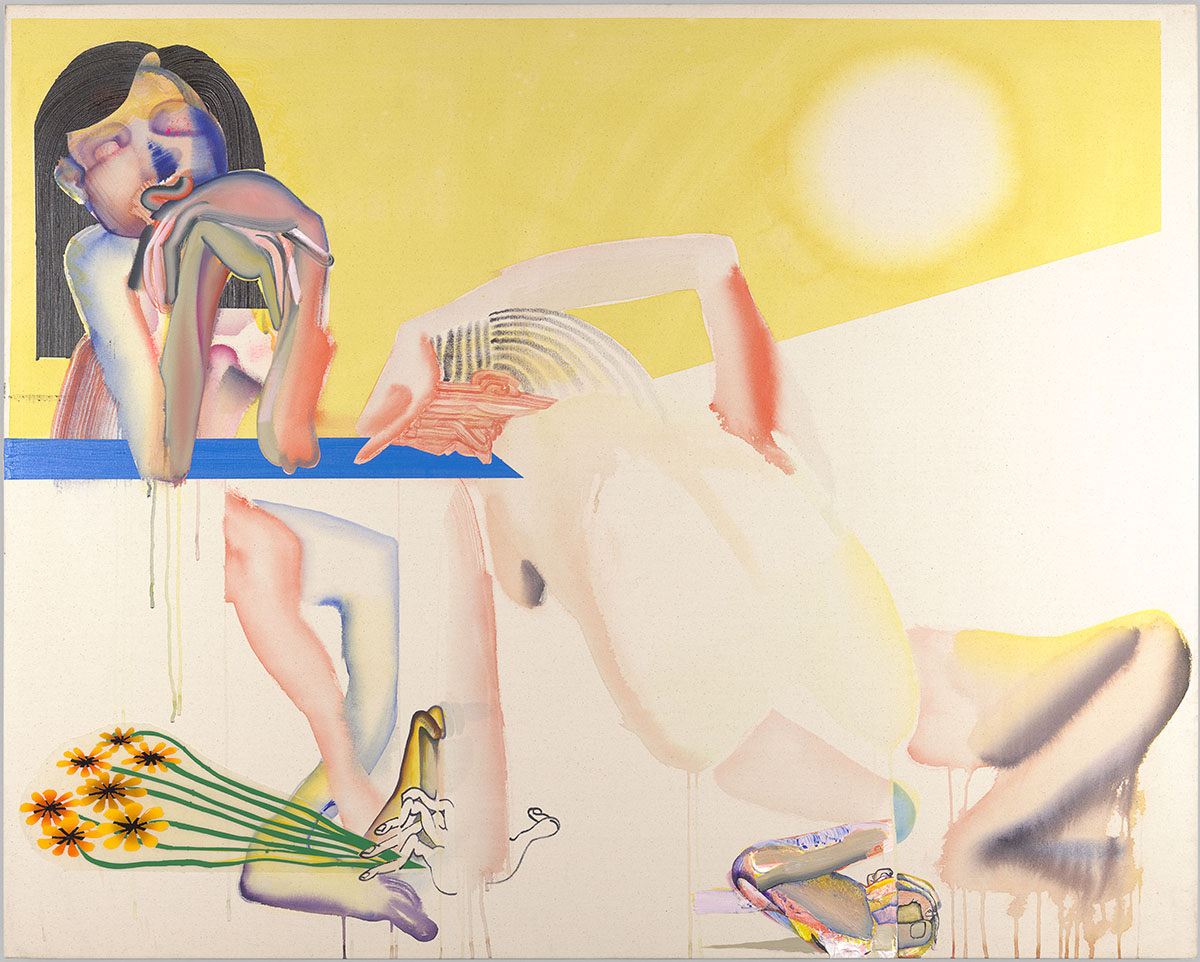 (Berkeley, CA) August 23, 2018—Christina Quarles receives her first solo museum exhibition at the UC Berkeley Art Museum and Pacific Film Archive (BAMPFA) this fall. The acclaimed Los Angeles-based artist has created multiple new works for the exhibition that advance her continuing exploration of the fluidity of race, gender, and sexuality. Her presentation at BAMPFA marks the latest installment in the museum’s MATRIX program, which in 2018 celebrates forty years of introducing Bay Area audiences to exceptional contemporary art.

Christina Quarles / MATRIX 271features nine of Quarles’s distinctive acrylic paintings, which allude to themes of race and gender through enigmatic semi-figurative compositions. Informed by the artist’s self-identification as “a queer, cis woman who is black but is often mistaken as white,” the works probe the intricacies of identity through depictions of intertwined bodies set against a mysterious backdrop of shifting forms and floating horizontal planes. By situating her subtly erotic compositions in a dreamlike environment that seems to shift between interior and exterior space, Quarles explores the relationship between the subjective experience of queer female identity and the social constructs that surround it.

Quarles’s distinctive use of space can be seen in works like Moon (Lez Go Out N’ Feel Tha Nite) (2017), in which a jumble of female forms is set against a moonlit landscape that appears suspended in its own delineated frame—suggesting either a window into an exterior setting or a two-dimensional image hanging on a wall, depending on the viewer’s sense of perspective. The entanglement of bodies is a recurring motif throughout much of the artist’s work, as in …Tha Color of Tha Sky (Magic Hour) (2017), where four bodies bend and compress around each other in a spatially ambiguous arrangement that echoes early Cubist compositions. Quarles’s use of gestural brushwork in these paintings recalls the visual grammar of Abstract Expressionism, which she complicates with stylistic and textural variations that range from exposed canvas to trompe l’oeil effects.

“Christina Quarles is a singular talent in today’s contemporary art scene, whose intoxicating paintings tussle with culturally prescribed identities and probe those margins where meaning remains unfixed, illegible, and something composed in order to question,” said the exhibition’s curator Apsara DiQuinzio, curator of modern and contemporary art and Phyllis C. Wattis MATRIX Curator at BAMPFA. “We’re thrilled to provide Christina with her first solo museum exhibition at a moment when a growing national audience has come to appreciate her remarkable and distinctive vision.”

In conjunction with the opening of Christina Quarles / MATRIX 271, Quarles is joined in conversation by DiQuinzio for an artist’s talk on Thursday, September 20 at 6 p.m. Visitors are also invited to join Olivia Young, PhD candidate in UC Berkeley’s Department of African Diaspora Studies, for a gallery talk about Quarles’s paintings on Wednesday, October 10 at 5:30 p.m.

Born in 1985 in Chicago and raised in Los Angeles, Christina Quarles received her BA from Hampshire College in 2007 and her MFA from Yale University in 2016. Quarles has been featured recently in several notable museum exhibitions, including Made in L.A. 2018 at the Hammer Museum, Los Angeles; Trigger: Gender as a Tool and a Weapon at the New Museum, New York; and Fictions at the Studio Museum in Harlem, New York. She has had solo and two-person exhibitions at Pilar Corrias Gallery, London; David Castillo Gallery, Miami; and Skibum MacArthur, Los Angeles. Additionally, she has shown work in group exhibitions at Jessica Silverman Gallery, San Francisco; Cooper Cole Gallery, Toronto; Gagosian Gallery, Miami; Rubell Family Collection, Miami; Kohn Gallery, Los Angeles; and LAXART, Los Angeles, among others. The artist was a participant at the Skowhegan School for Painting and Sculpture in 2016 and was a 2017 resident at the Fountainhead Residency in Miami. She has been the recipient of several awards and grants including the Rema Hort Mann Emerging Artist Grant and the Robert Schoelkopf Fellowship at Yale University. Christina Quarles / MATRIX 271 is her first solo museum exhibition. Quarles lives and works in Los Angeles; she is represented by Regen Projects, Los Angeles; and Pilar Corrias, London.

Christina Quarles / MATRIX 271 is organized by Apsara DiQuinzio, curator of modern and contemporary art and Phyllis C. Wattis MATRIX Curator, with Matthew Coleman, curatorial assistant. The MATRIX Program is made possible by a generous endowment gift from Phyllis C. Wattis and the continued support of the BAMPFA Trustees.