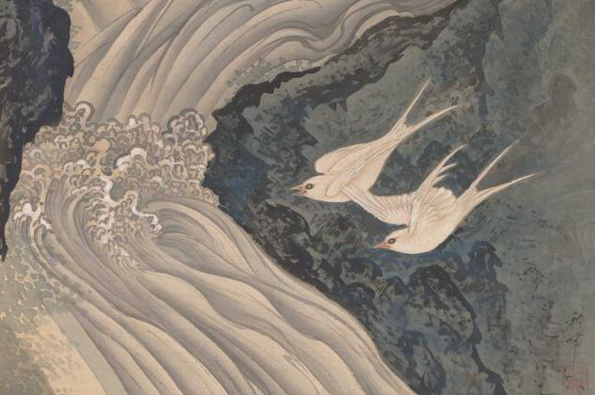 Hinges: Sakaki Hyakusen and the Birth of Nanga Painting

(Berkeley, CA)—The work of Japanese artists and filmmakers is a central focus of the exhibition and film programs in the coming year at the UC Berkeley Art Museum and Pacific Film Archive (BAMPFA). Over the course of 2019, the museum mounts three major exhibitions of work by Japanese artists past and present—including two historical exhibitions and one focused showcase of the Osaka-born, Bay Area-based artist Masako Miki, whose practice draws on Japanese folklore. As part of this yearlong theme, BAMPFA also screens nearly a dozen masterworks of Japanese cinema, presented on pristine 35mm prints drawn from the museum’s film holdings—which encompass the largest collection of Japanese films outside Japan.

BAMPFA’s focus on Japanese art and film in 2019 coincides with the centennial anniversary of the museum’s Japanese art collection, which was established in 1919 by a donation of more than 1,000 woodblock prints from the estate of UC Berkeley Professor William Dallam Armes. A graduate of UC Berkeley’s class of 1882, Armes traveled frequently to Japan and amassed one of the largest private collections of Japanese prints of his generation—all of which were bequeathed to the university following his death. The gift transformed what had formerly been a modest regional art collection into one with an international scope, forming the foundation for BAMPFA’s extensive holdings of Asian art and film.

The hundred-year legacy of BAMPFA’s Japanese art collection is the basis for Ink, Paper, Silk: One Hundred Years of Collecting Japanese Art, which opens the museum’s year of Japanese programming on December 12, 2018. The exhibition showcases more than fifty works representing four centuries of Japanese artmaking traditions, including several highlights from Armes’s original print collection alongside outstanding examples of hanging scroll paintings, screens, lacquerware, and ceramics that have been acquired by the museum over the past century.

The delicately painted White Swallows by a Waterfall (above) by Okamoto Shūki (1807–1862) demonstrates the artist’s special connection to the natural world. Another highlight of the exhibition is an impressive pair of gilded folding screens, each more than twelve feet wide, attributed to the eighteenth-century painter Nagasawa Rosetsu (1754–1799). In this charming work, young boys line up to climb over a massive, reclining elephant, feeding him tufts of grass and wondering at his enormity. On public view for the first time is a remarkable group of surimono prints—small, privately published prints made for special occasions and intended as gifts—along with new translations of the poetry inscribed on these exceptionally beautiful works. The exhibition also features several fine lacquerware and ceramic pieces that have recently joined the collection.

In addition to Ink, Paper, Silk, BAMPFA is highlighting its longstanding commitment to Japanese art and film with other major exhibitions and programs throughout 2019. These include:

BAMPFA complements its year of Japanese exhibitions and films with a range of public programs, including an Ink, Paper, Silk Gallery Talk with Elizabeth Sharf, a visiting scholar in UC Berkeley’s Center for Japanese Studies, on December 13 at noon; an Artist’s Talk with Masako Miki on January 16 at noon; and family-friendly art workshops inspired by Ink, Paper, Silk and MATRIX 273 on February 9 and January 12, respectively. Additional public programs in conjunction with Hinges will be announced in 2019; visit bampfa.org for a current schedule. All programs are free with museum admission.

Masako Miki / MATRIX 273 is organized by Julia M. White, senior curator for Asian art, with Matthew Coleman, curatorial assistant. The MATRIX Program is made possible by a generous endowment gift from Phyllis C. Wattis and the continued support of the BAMPFA Trustees.