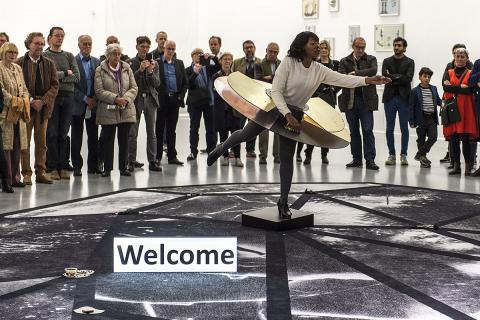 (Berkeley, CA) April 18, 2016—The University of California, Berkeley Art Museum and Pacific Film Archive (BAMPFA) presents Otobong Nkanga / MATRIX 260, the first solo museum show in the US by the Nigerian-born, Antwerp-based artist. Nkanga works with a variety of media, including drawing, photography, installation, and performance art. She observes social and topographical changes in her environment, the complexities that are embedded within these experiences, and how natural resources and their potential values are subjected to regional and cultural scrutiny. Her MATRIX presentation consists of two mixed-media performance works that use self-reflection and storytelling to further explore the material, natural, and sociopolitical history of Nigeria and beyond. Nkanga will present From Where I Stand (2015) at BAMPFA on May 11 and Contained Measures of a Kolanut (2012) at the Tropical House in the UC Botanical Garden at Berkeley on May 14.

From Where I Stand is an investigation into the colonial history of the mineral rush of the nineteenth and early twentieth centuries in parts of Africa, when European companies extracted minerals, such as mica, copper, and malachite, from resource-rich areas, leaving them in a state of permanent ruin. In May 2015, Nkanga visited Tsumeb, Namibia, a German colonial town founded in 1905, to find out what remained after extensive mining of a massive natural hill of green, oxidized copper ore. Her discoveries led Nkanga to develop several works, including From Where I Stand, in which a rug resembling the shape of a mineral becomes a platform for a series of performances. For MATRIX, Nkanga will debut a newly commissioned performance as part of this series. The From Where I Stand performances “really touch upon what humanity is and what we are becoming in relation to the past, present, and a possible future,” comments Nkanga. “There isn't always a fixed way or topic with regard to the performance, but I am interested in layering thoughts, inserting researched materials, experiencing the moment, evoking the past, looking for ways of repair for the future, changing perceptions, sharing experiences, and learning while doing.”

Contained Measures of a Kolanut, which will take place at the UC Botanical Gardens, presents an array of tables with diagrams, maps, and images, among other things, that explore the rituals and cultural histories associated with the kolanut. A bitter nut indigenous to West African rainforests, the kolanut is also a natural source of caffeine. Over the course of four hours Nkanga will sit at one of the tables and ask participants to sit with her. Surrounded by various pictures and materials, she will engage them in discussion and invite them to partake in her variation of a kolanut ceremony. “I look at the mythologies that surround the plant, the aspects that are linked to things we consume, the chemicals found in the plant, its stories of displacement,” Nkanga says. “Contained measures allows for all these research materials, the emotions, and the body to find their place within the installation.”

From Where I Stand
Wednesday, May 11, 7:30 p.m.
A newly commissioned mixed-media performance work by Otbong Nkanga, presented as part of MATRIX 260.
BAMPFA: 2155 Center Street
Included with admission

Artist bio
Otobong Nkanga was born in Kano, Nigeria in 1974, where she also began her art studies at the Obafemi Awolowo University in Ile-Ife. She continued her education at the École Nationale Supérieure des Beaux-Arts, Paris; the Rijksakademie van beeldende kunsten, Amsterdam; and in 2008 obtained a master’s degree in performing arts from Dasarts, Amsterdam. Recent solo projects have taken place at M KHA, Antwerp; Portikus, Frankfurt; Kadist Art Foundation, Paris; and the Performance Room at Tate Modern, London. She has been included in many international group exhibitions, such as the upcoming 20th Biennale of Sydney (2016), 13th Biennale de Lyon (2015), 31st São Paulo Biennial (2014), the 8th Berlin Biennale (2014), and Sharjah Biennal 11 (2013). Last year, she was the distinguished recipient of the 2015 Yanghyun Prize. Nkanga lives and works in Antwerp, Belgium.

Support
Otobong Nkanga / MATRIX 260 is organized by Apsara DiQuinzio, curator of modern and contemporary art and Phyllis C. Wattis MATRIX Curator, and Philippe Pirotte, BAMPFA adjunct curator. The MATRIX program is made possible by a generous endowment gift from Phyllis C. Wattis and the continued support of the BAMPFA Trustees.

About BAMPFA
Internationally recognized for its art and film programming, the UC Berkeley Art Museum and Pacific Film Archive (BAMPFA) is a platform for cultural experiences that transform individuals, engage communities, and advance the local, national, and global discourse on art and film. Founded in 1963, BAMPFA is UC Berkeley’s primary visual arts venue with its screenings of some 450 films and presentations of up to twenty exhibitions annually. BAMPFA’s mission is to inspire the imagination and ignite critical dialogue through art and film.