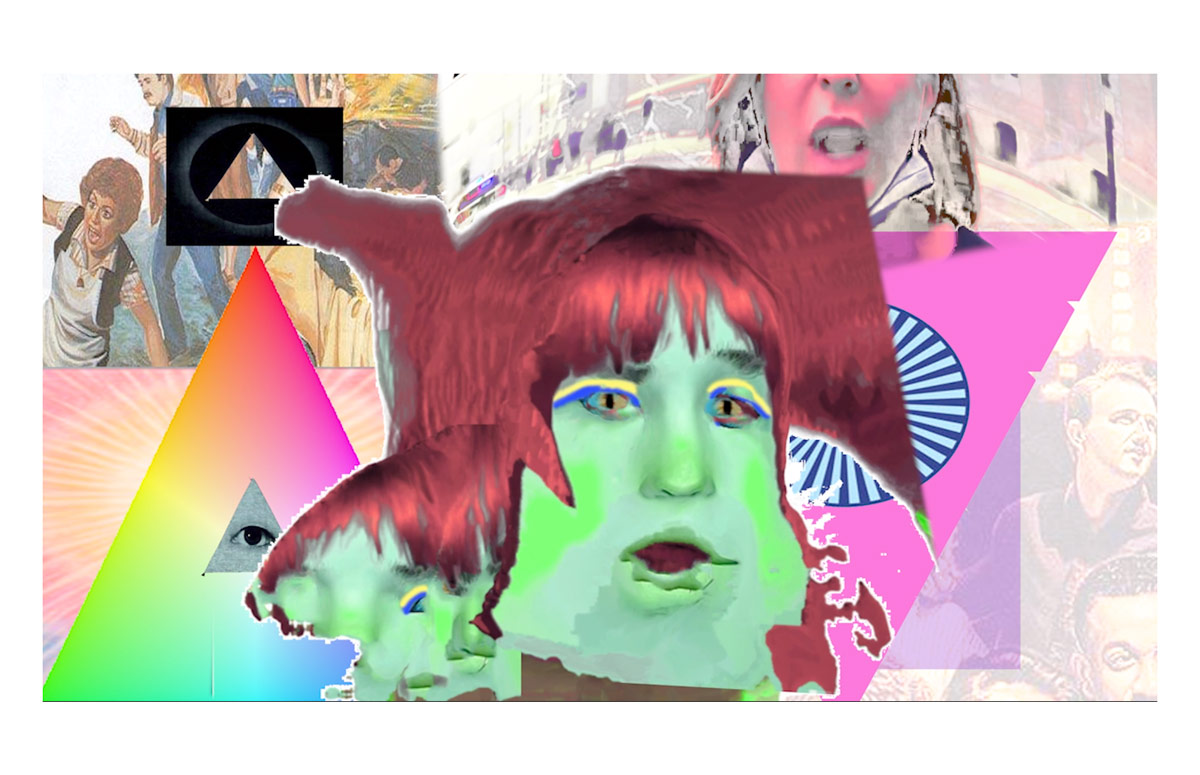 (Berkeley, CA) May 10, 2022—The Berkeley Art Museum and Pacific Film Archive (BAMPFA) will highlight the work of six exceptional graduate students from UC Berkeley’s Department of Art Practice in the museum’s fifty-second Annual Master of Fine Arts Graduate Exhibition. Each of the graduates—four of whom are receiving their first museum presentation—have created new work for the exhibition that will go on view for the first time beginning May 13.

“Through their multidisciplinary practices spanning video, textiles, ceramics, painting, sculpture, and animation, the artists in this exhibition have created works that depart from personal and collective histories to materialize complex insights into our present and future,” said Frost, who curated the exhibition. “In this time of radical reemergence and change, this work—from the first Cal MFA cohort to identify entirely as BIPOC—generates hopeful critiques that center indigenous, queer, and diasporic identities and ways of being.”

The opening of the MFA Graduate Exhibition includes an artists’ talk with the six participating students on Friday, May 13 at 5:30 p.m. The presentation is free with museum admission. Descriptions of each artist’s work, adapted from a brochure that accompanies the exhibition, follow below:

Thinking and making through the lens of her experience as a member of the African diaspora who has continued to relocate throughout her adult life, Deeman explores the attendant sense of dislocation, as well as inherited or found roots, in her recent work. As a first-generation Black British person, her maternal family moved from Jamaica to the United Kingdom in the 1960s as part of the Windrush Generation. In 2020, and in the depths of the pandemic, Deeman migrated her art practice between the Bay area and Seattle, and there began cultivating native and diasporic plants that connect her to the many lands of her heritage. From this garden, Deeman harvested a single okra pod in the summer of 2021. Native to West Africa and transported with enslaved Africans during the Middle Passage to the Caribbean and then the United States, the plant was able to grow in the Pacific Northwest during the region’s hottest summer on record.

For [murmur] (2022), Deeman produced hundreds of okra pods, modeled from the one that grew in her garden. Printed from iridescent plastic and suspended in a chromatic gradient wave, the vegetable is transformed from something nourishing and impermanent into an archivable form whose shifting colors reference queer and diasporic ways of being. Beneath the pods rests an ambiguous plexi-glass structure formed by heat and molded by Deeman’s hand and body. The transparent plane undulates and reflects the forms and colors of the okra, suggesting both water and land, movement and stasis. Glowing and changing as the viewer circulates around it, [murmur] indexes the circumstances of migration, climate, and culture that supported this particular okra pod’s growth, while also proposing a limitless space for Black diasporic identity.

Frías’s work is based in practices of care and spirituality that propose a future in which queer, Indigenous, and feminist knowledge is centered. A deeply multidisciplinary artist, they produce performances, GIFs, sculpture, video, sound, and many other forms of art. For this exhibition, Frías created a waiting room in a treatment center of the future. A response to the collective experience of close community and family members succumbing to algorithm-driven brainwashing, their project embraces the liminal nature of such spaces to probe the possibilities and dangers of New Age healing and thought.

Hixiapa (all elements 2022) (which means “center” in Frías’s ancestral Wixárika language spoken by indigeous people in Mexico) consists of three elements that engage Wixárika spiritual and creative traditions to guide the waiting room visitor’s experience. A large printed tapestry entitled Teiwáari, is a ritual device called a niereka that allows one to engage in world building, as well as contacting other realms. Xamuríiya (which means “to be caught in a web”) includes a variety of animated videos that play within the gallery and in other spaces in the museum as a looping channel of passive entertainment that is also an active algorithm, conditioning and coaxing people into the space. The final element, Mi Uwene (2022), replaces the banal design of the waiting room chair with a sacred shaman’s chair. By building out the contemporary space of the waiting room with Indigenous ritual objects that utilize computer-generated aesthetics alongside natural and fantastical human-made materials, Frías interrogated and reimagined notions of healing through the many gray areas between helping and harming.

With his work grounded in documentary filmmaking, Hambira seeks to connect nodes of history that tell a story of shared resilience and invention despite ongoing colonial and racial oppression. While his earlier work documented families impacted by police violence, his current work focuses on the twentieth century’s first genocide—the Herero and Nama Genocide, carried out by Germany in 1905 in his family’s native Namibia. Engaging textiles and traditional costumes alongside video, here Hambira bridged geography and time to describe the indelible and far-reaching impacts of the genocide and the ongoing struggle for reparations and reconciliation.

For this exhibition, Hambira created an installation that is grounded in a large multicolored flag, on which Namibia is spelled out phonetically, a nod to former President Trump’s mispronunciation of the country’s name in a speech to the United Nations in 2017. Quilted with colors that are found in both the German and Namibian flags, the piece enforces a correction while tethering the error to the colonial violence that defines Namibia’s history and present. Alongside the flag is an otjikaiva, a

Victorian-style hat like those worn by nineteenth-century German missionaries but made of Namibian fabrics—an important sign of cultural identity for the Herero in resistance to the history of the genocide. Playing as part of the installation, Hambira’s film draws together personal and historical contexts for the work. The stitching and pinning of the fabric in the otjikaiva and flag, as well as the composition of the film, emphasize the constructed nature of racism and the persisting impacts of Germany and Namibia’s inextricable histories.

Kaddoura’s work opens a space for Palestinians to daydream, wonder, and exist in multiple spaces in search of a homeland. As a Palestinian raised in Lebanon, Hala has no legal right to visit Palestine. She uses that lack of access to fuel her work in film, photography, and collage—to open a portal, where her ancestors and community can exist. Her work playfully explores self-expression and its connection to a broader collective memory, while exploring what familiarity and a sense of belonging look like. These sensations she identifies with are often related to landscapes and a sense of comfort she experienced in the Los Angeles area and San Diego. Through these places and connections, she explores the embodied knowledge that allows her to find feelings of home even in places and times of cultural isolation.

Kaddoura’s multichannel video installation for this exhibition consists of short films that include archival footage, new content shot on a documentary camcorder, as well as her iPhone. In Fragmented Wonderland (2022), scenes of her time at Burning Man are juxtaposed with a sign that reads: Palestine. In another video, an image of Ain El Mraisi—a coastal neighborhood in Beirut—is overlaid with views from Sunset Cliffs in San Diego, the same cliffs she stands on in the last video while holding an archival photograph of a Palestinian wedding in Jafa.  By piecing together present and past, near and far, Kaddoura softens the tension of dislocation with gentle intimacies that evoke the bittersweetness of feeling at home when you are far away.

Through a practice based in ceramics, research, and performance, Lee creates objects and installations that excavate Cantonese histories related to the origins of the silk trade and their continued resonances in the diaspora. During their studies at UC Berkeley this has included raising silkworms from eggs and stretching their spun cocoons. Lee’s sculptures and collages pursue archival threads that reveal the ugliness of racism behind the veneer of Oriental fetishes and open up space for queer narratives and ways of being within history. As a queer nonbinary Cantonese person of Sunwui (Xinhui) descent, Lee has been able to reframe their own history and biography through their research in a way that gratifies a yearning to see their experiences in both the past and the future.

The centerpiece of Lee’s installation is a string of porcelain lanterns suspended from the ceiling. By swapping the traditional lantern material of paper or silk for ceramic, Lee made the lanterns, which are symbolic of hopeful wishes for the future, both more permanent and more fragile in their objecthood. The delicacy and enduring quality of the lanterns mirror the histories and hopes of Cantonese immigrants depicted in the photocollage on the wall behind the lanterns. With images from the Bancroft Library collections, community, and online archives, mixed with photographs of Lee’s own family, it is impossible to determine which images come from each source––a construction that mirrors Lee’s experience of finding family histories so much like their own in the archive. The form of the collage follows the silhouette of the lanterns and is printed on silk so that they appear almost as a shadow of the hanging lanterns. The alternate versions of the same form brings an aliveness to the static sculpture that expresses the potential that creative mining of the archives provides for reimagining both the future and the past.

Louissaint’s work operates in three modes depicting: the history of capitalism, imperialism, and racism; how these social and economic systems continue to oppress and exploit today; and the possible futures beyond the horizons of capitalism. Though the Haitian-born artist focuses on painting, Louissaint works across mediums when needed in order to better communicate their message. Recognizing the global working class' colossal power and unbridled potential, Louissaint understands art as a crucial educational and mobilizing tool in the struggle to build the world we deserve – one where providing for the needs, well-being, and rights of the people and other lifeforms of Earth are central and the insatiable capitalist hunger for profit a nightmare of the past. In the tradition of artists such as Riva Helfond, Kerry James Marshall, and Diego Rivera, Louissaint memorializes past struggles alongside powerful visions of progress.

For this exhibition, Louissant depicted a possible world in which contemporary architecture emerges from a foggy background. Painted directly onto the canvas, which is stretched directly on the wall, the work carries the urgency of a protest banner or political graffiti scrawled directly onto the side of a building. However, while Louissant’s brushstrokes mimic hurriedness, they coalesce into carefully constructed tableaux with defined negative spaces that conjure both the mists of history and the impossibility of predicting the future. The seductive instability of the paintings are cut short by a heavy steel fence that partially obscures the bottom of the painting. Louissaint envisions the structures that support the world they want to live in while placing them just beyond the barriers that slow our progress towards reaching them.

The annual MFA exhibition is made possible by the Barbara Berelson Wiltsek Endowment.