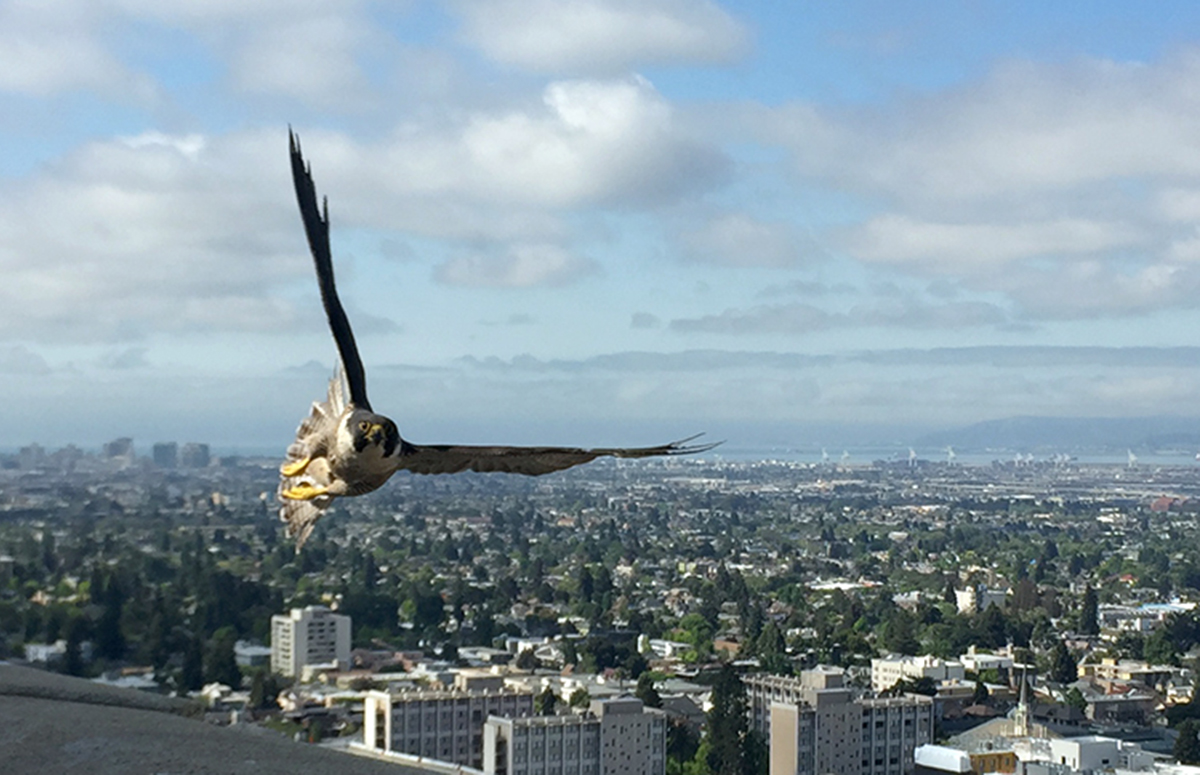 Live-streaming Throughout the Day on BAMPFA’s Massive Outdoor Screen

(Berkeley, CA) April 18, 2019—A beloved pair of peregrine falcons nesting in UC Berkeley’s Campanile bell tower are incubating a clutch of three eggs due to hatch next week. In anticipation, the UC Berkeley Art Museum and Pacific Film Archive (BAMPFA) will present a live webstream on its massive outdoor screen throughout the day on Thursday, April 25. Arguably the most prominent members of the East Bay’s raptor community, “Annie” and “Grinnell” have made the Campanile their home since 2017, developing a fan base across and beyond UC Berkeley. To celebrate the arrival of their latest offspring, BAMPFA will stream video live from the Campanile’s “nest-cam” from 8:30 a.m. to 6:00 p.m. This outdoor presentation is free and open to the public.

“We’re excited to celebrate the comeback of this charismatic species of raptor across the state of California by highlighting the birth of three young chicks right here on the UC Berkeley campus,” said Allen Fish, director of the Golden Gate Raptor Observatory. “This unprecedented collaboration with BAMPFA and our fellow partners is a moving reminder of the bridges between art and science, showcasing a special moment in the lives of our avian friends on a lavish outdoor screen that only BAMPFA could provide.”

To share this event with the Berkeley community, BAMPFA is partnering with the UC Berkeley Museum of Vertebrate Zoology, the Golden Gate National Parks Conservancy, the East Bay Regional Park District, the Institute for Wildlife Studies, and the Institute for Bird Populations. On April 25, raptor specialists from the partner organizations will be stationed at BAMPFA’s outdoor screen on Addison Street between Shattuck and Oxford in downtown Berkeley, where they will answer questions as the peregrine chicks “pip” (break through the egg shell) and hatch. Specialist interviews are available on request and can be scheduled by emailing afox@berkeley.edu or calling 510-642-0365.

Peregrine falcons, the world’s fastest birds, have recovered spectacularly in North America thanks to protections from the Endangered Species Act. The Museum of Vertebrate Zoology’s collections played an important role in documenting that DDT-caused eggshell thinning in Peregrines and other raptors, leading to population declines. While only two peregrine pairs were known to nest in California at the population low in 1970, more than 400 pairs are estimated to flourish in the state today, often in urban areas. After joining the UC Berkeley community in 2017, Annie and Grinnell hatched two chicks that year and three in 2018. Two cameras were installed in 2019 to monitor the eyrie (nest), supported by a successful crowd-funding initiative that raised more than $14,000.

Like many future parents, Annie and Grinnell have been posting periodic updates about their expectant family via Facebook and Twitter (@CalFalconCam) and Instagram (@cal_falcons). A livestream video of the nest is also available to the public 24/7 on YouTube at UC Berkeley Campanile Peregrine Cam. Followers are encouraged to send their warm wishes to the happy couple using the hashtag #CalFalcons.