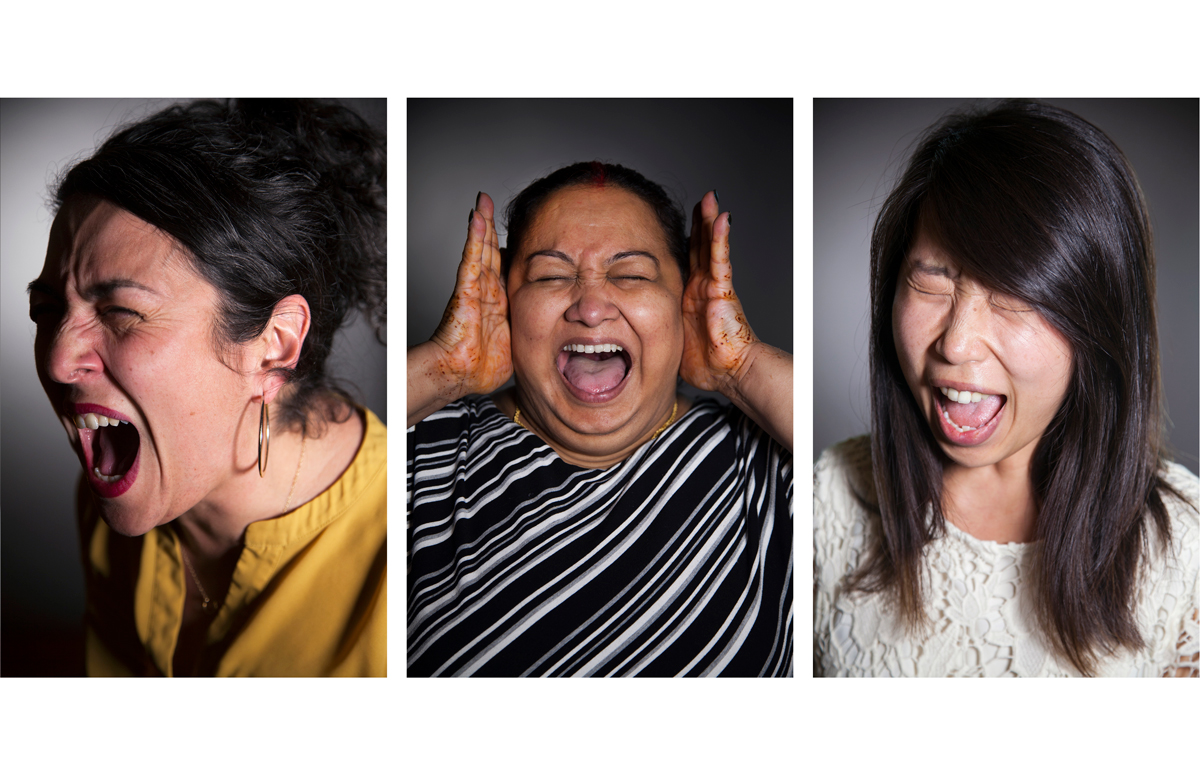 (Berkeley, CA) July 13, 2022—In response to the alarming rollback of women’s rights over the past month, the UC Berkeley Art Museum and Pacific Film Archive (BAMPFA) has invited the artist Whitney Bradshaw to present her celebrated photography series OUTCRY on the museum’s massive outdoor screen. Starting today and running through the Fall 2022 election day, BAMPFA’s outdoor screen will display a looping rotation of more than one hundred images from Bradshaw’s photo series, which portrays women engaging in unbridled self-expression at maximum volume as an act of defiance against patriarchal oppression. The BAMPFA presentation marks the first time that selections from this series, which Bradshaw began in 2018, will be presented in a large-scale digital format.

Since Bradshaw launched the OUTCRY project on the night of the 2018 Women’s March, the series has grown to more than four hundred photos of women from all walks of life who have chosen to take a stand against a mainstream culture that too often dismisses women’s voices. Drawing from her background in social work, the Chicago-based artist invites small groups of women who are not previously acquainted with each other into her studio for “scream sessions”, where they can vent emotions—ranging from rage to sorrow to laughter—in a safe and supportive environment designed to cultivate a spirit of feminist solidarity across different life experiences. The resulting photo portraits invite viewers to consider important issues related to sexism, racism, and classism, challenging expectations around how women—and in particular, women’s anger—are portrayed in mainstream culture.

BAMPFA will present OUTCRY on its 17-by-30-foot outdoor screen in three sixty-minute rotations each day, beginning at 8:30 a.m., 12 p.m., and 6 p.m. The outdoor screen presentation was organized over the past month by BAMPFA’s Executive Director Julie Rodrigues Widholm, who previously curated the 2018 debut exhibition of the entire OUTCRY series at the DePaul Art Museum and who is working with Bradshaw to organize a “scream session” in Berkeley later this year.

“With so many reasons for individual and collective outcry in the United States today—from the overturning of Roe vs. Wade to a proliferation of mass shootings and racist violence—Whitney Bradshaw so beautifully and forcefully merges the traditional genre of portraiture with an urgent message of righteous outrage and intersectional solidarity,” said Widholm. “This work advances BAMPFA’s commitment to platform artists who address the most pressing issues of our time and to enhance the use of BAMPFA’s outdoor screen as a dynamic place for public art.”