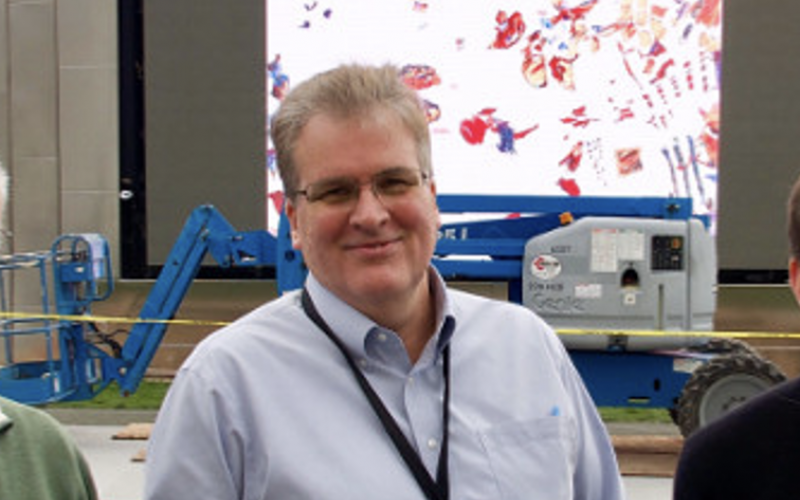 The UC Berkeley Art Museum and Pacific Film Archive (BAMPFA) announced today the retirement of Chief Administrative Officer Richard Tellinghuisen, who is stepping down after twenty-one years of service to the museum. A search for his successor will begin later this year.

“Richard Tellinghuisen’s contributions to BAMPFA have been truly transformative—most visibly in the form of a magnificent new building, the existence of which is due in no small part to his leadership as a project manager for more than a decade,” said BAMPFA Director Julie Rodrigues Widholm. “Every visitor who has ever walked through our doors during Richard’s tenure has benefited from his skillful and meticulous management of our daily operations, which have kept the museum running smoothly and sustainably throughout a range of institutional transitions. We’re deeply grateful for his service to BAMPFA, and we wish him all the best for retirement.”

For the past two decades, Tellinghuisen has advanced BAMPFA’s strategic goals in multiple administrative leadership capacities, beginning with his appointment in 2000 as the director of facilities and new building planning—a position that was established by then-Director Kevin Consey to oversee the development and construction of a new facility for the museum, which was at that time in the early stages of relocating from a previous location due to seismic issues. As the lead project manager for the $115 million capital initiative, Tellinghuisen was deeply involved in every phase of the project’s design and construction, from the architect selection process, to the development of facility requirements, to the coordination between staff and professional consultants. Tellinghuisen played a key role in the engagement of Diller Scofidio + Renfro—the internationally acclaimed architecture firm best known for its work on New York’s Lincoln Center for the Performing Arts—to design the 82,000-square-foot facility in downtown Berkeley that today serves at the museum’s permanent home. When the new building was inaugurated in January 2016, The New York Times praised it as “inspired” and “superb”.

In 2007, Tellinghuisen was promoted to the position of chief administrative officer, expanding his portfolio to include oversight of every aspect of BAMPFA’s day-to-day operations—including business services, human resources, visitor services, digital media and IT, and security. As a senior member of BAMPFA’s leadership team, Tellinghuisen has played a central role in the museum’s financial planning, developing multiyear administrative strategies to ensure BAMPFA’s long-term institutional health and vitality. When the museum transitioned to its new home in 2016, Tellinghuisen supervised the development of a comprehensive operations plan for the new facility, which successfully welcomed more than two hundred thousand visitors in its first year.

When BAMPFA’s previous director Lawrence Rinder stepped down last year, Tellinghuisen was appointed interim co-director of the museum, a position he began on March 10, 2020—less than a week before the museum was forced to suspend in-person operations due to the Covid-19 pandemic. In the early months of the pandemic, Tellinghuisen led BAMPFA through an unprecedented period of transition to remote operations, maintaining the museum’s fiscal solvency and ensuring that BAMPFA continued to serve its public through a robust slate of digital programming during the extended closure. Under Tellinghuisen’s stewardship, BAMPFA was able to avoid staff reductions, and the museum successfully reopened its doors to the public in May 2021.

Prior to joining BAMPFA, Tellinghuisen served in a series of administrative roles at multiple museums across the United States, including senior leadership positions at the Museum of Contemporary Art, Chicago, and the Newport Harbor Art Museum (now the Orange County Museum of Art) where he led the strategic planning processes for multiple capital projects. Tellinghuisen received a Masters of Fine Arts in 1982 from the University of California, Irvine, and a Bachelor’s Degree in Fine Arts and Psychology from Metropolitan State College, Denver, Colorado, in 1978.

“It’s been an honor to serve at BAMPFA during such a remarkable period of growth and transformation for the museum,” said Tellinghuisen. “I’m proud to have contributed to BAMPFA’s success alongside my outstanding team of colleagues, who I know will be more than capable of steering the museum through an exciting new chapter of its history after I retire.”