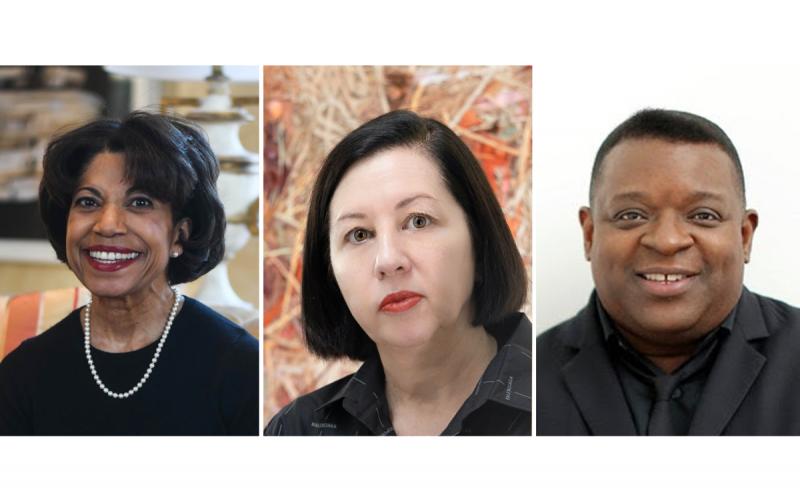 BAMPFA announced today the appointment of three arts leaders to join its Board of Trustees, along with the election of a new Board leadership slate. Joining the Board for the first time are Brenda Drake, a lawyer, foundation executive, community activist, and former museum administrator; Pamela Hornik, an art philanthropist and collector; and the filmmaker and installation artist Isaac Julien.

In addition to these new appointments, BAMPFA’s Board of Trustees has elected Ann Baxter Perrin to serve as its President and Margarita Gandia as Vice President, and has re-elected James B. Pick to continue serving as Treasurer. These appointments and elections were ratified by the full Board this fall.

“On behalf of BAMPFA’s staff, I’m delighted to welcome these exceptionally accomplished individuals to our Board of Trustees, and I look forward to working closely with them and our new Board officers to strengthen BAMPFA’s role as a leading museum that is locally connected and globally relevant,” said BAMPFA Director Julie Rodrigues Widholm. “BAMPFA is fortunate to be blessed with such an impressive roster of leaders who are deeply devoted to our mission to ignite critical dialogue and community engagement through interdisciplinary, intersectional, and innovative art and film programs, and I’m excited to partner with them on actualizing this shared vision at every level of the museum.”

“I’m honored to begin my service as the president of BAMPFA’s Board of Trustees, and in that capacity I extend a warm welcome to our newest members, who will enrich both our Board and the museum itself with their strategic thinking, leadership experience, and abiding passion for the arts,” said Perrin. “As our Board President, I’m committed to helping BAMPFA fulfill its mission as a leading museum for a twenty-first century audience, one that offers artistically ambitious, socially relevant arts programming that addresses the most critical issues of our time. I know that Brenda, Pamela, and Isaac share these aspirations, and I’m excited to work with them to lead BAMPFA into a vibrant next chapter.”

Perrin succeeds BAMPFA’s outgoing Board president Catherine Koshland, who is currently the interim executive vice chancellor and provost at UC Berkeley. During her tenure as president, Koshland chaired the search committee that appointed Widholm as director of the museum in June 2020.

Brenda Drake has a distinguished career in education, the law, the arts and community service. Originally from Berkeley, Mrs. Drake has worked as an attorney, foundation executive, community activist, and university ambassador in both California and Ohio. She is a strong partner in the ongoing work of her husband Dr. Michael Drake, M.D., who serves as the twenty-first president of the University of California. Mrs. Drake began her career practicing corporate law in San Francisco and Marin County before joining the philanthropic sector where she developed grant-making programs focused on women’s health, the environment, education, the arts, the elderly, and the elimination of poverty. From 2005 to 2014, she was associate to the chancellor at UC Irvine and held the same position at the Ohio State University. She has been a director or trustee at numerous nonprofit organizations focused on education, international health, finance, civil rights, and the arts.

“As a Berkeley native and proud member of the UC family, I am thrilled to join BAMPFA’s Board of Trustees to help the renowned institution share bold ideas and inspired works of art with the Berkeley community and the world,” said Drake. “With roots dating back to the nineteenth century and an impressive collection, BAMPFA continues to engage a broad audience by showcasing UC Berkeley’s world-class artistic resources and vital visual-arts curation. I look forward to supporting the vision and leadership of Director Widholm and her talented staff. At a time when the world can feel so polarized, the arts—and influential institutions like BAMPFA—have the power to remind us of our shared humanity and capacity to create works of great poignancy and beauty. I am proud to support BAMPFA on behalf of UC Berkeley’s students, faculty and staff and the wider community.”

A prominent leader in the Bay Area’s arts philanthropy community, Pamela Hornik is also an avid art collector, with a particular focus on contemporary figurative art. Based in Palo Alto, Ms. Hornik serves on the Director’s Advisory Board of Cantor Arts Center at Stanford University, as well as the Management Committee of Stanford’s Anderson Collection. She also works with the Time In Children’s Arts Initiative in New York City, an organization dedicated to increasing access to the performing and visual arts for children in underserved communities. Ms. Hornik is deeply involved with the Institute of Contemporary Art, San Francisco, a new noncollecting art museum with an equity-focused mission that is set to open in San Francisco’s Dogpatch neighborhood in Fall 2022. She holds a Bachelor’s degree in history from UC Berkeley.

“I am honored to return to campus after thirty years to contribute to this amazing institution,” said Hornik. “I share BAMPFA’s deep commitment to promoting the ‘full spectrum of human experience’ both in my collecting and in my support of the broader arts ecosystem."

Isaac Julien is a London-based artist and filmmaker who has been acclaimed internationally for his multi-screen film installations and photography, which incorporate multiple artistic disciplines to create a unique visual language. Julien first rose to prominence with the celebrated short film Looking for Langston (1989), about the Harlem Renaissance, followed by his debut feature Young Soul Rebels (1991), which won the Semaine de la Critique prize at the Cannes Film Festival. He has been the subject of solo exhibitions and presentations at New York’s Museum of Modern Art, the Art Institute of Chicago, and the Bass Museum in Miami, as well as museums and galleries in Brazil, Canada, France, Germany, Ireland, Mexico, the Netherlands, South Africa, South Korea, Sweden, and elsewhere. Julien participated in the Venice Biennale at the inaugural Diaspora Pavilion in 2017. He has also taught extensively, most recently as Chair of Global Art at University of Arts London, and is currently Distinguished Professor of Arts at UC Santa Cruz where he has established The Isaac Julien Lab. He was awarded the title Commander of the Most Excellent Order of the British Empire (CBE) in the Queen’s birthday honors in 2017.